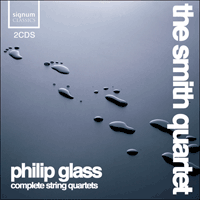 Following on from the critically acclaimed albums, Different Trains and Ghost Stories, Signum is pleased to announce the release of The Smith Quartet’s latest album, the complete string quartets by the world-acclaimed composer, Philip Glass.

Over a time span of 25 years, Glass completed 8 quartets (the 3 earliest were withdrawn) drawing on the influences of Bach to Shostakovich, as well as exterior musical sources: dance, theatre and film.

'If success was measured according to output and sales units alone, Glass would be head and shoulders above his contemporaries … played with characteristic precision and projection by the ensemble' (Gramophone)
'Glass weaves filigree tapestries given polished, finely detailed airings by the virtuoso Brits' (The Observer)
'How long before the Kronos is labelled the 'American Smith Quartet'? … they are ahead of the curve at generating new repertoire and taking the experimental back-catalogue seriously' (Classic FM Magazine)

‘A voice comes to one in the dark. Imagine.’
In the pantheon of composers working in the socalled Western classical tradition, few have attained the popular acclaim, critical plaudits, financial success and instant recognisability that Philip Glass has garnered during his lifetime.Fewer still can boast a similarly wide range of works spread across genres familiar to the classical cognoscenti: opera, orchestral, chamber and instrumental works; whilst also moving seamlessly into music of real significance for film, theatre, dance, multi-media experiments and on into the realms of contemporary electronic, ambient rock and world musics. Whether bringing younger audiences into the opera house or indeed the concert hall through his Philip Glass Ensemble, collecting multiple Oscars for film scores, writing symphonies based on the material of David Bowie and Brian Eno, collaborating with songwriters Paul Simon, and Suzanne Vega, or avant-garde independent electronic artists such as The Aphex Twin, Glass’s musical reach extends to the most disparate corners of the musical world. His reaction, (alongside fellow Americans Terry Riley, Steve Reich and La Monte Young) against the extremes of the music of Stockhausen, Boulez, Ligeti and their followers, continued a rediscovery of the musical language in use since Bach’s day. Boiling the musical elements down to basics by utilising constant, slowly shifting, mostly consonant, harmonies, a motoric, often insistent pulse and repetitive, highly organised compositional procedures Glass and his contemporaries breathed new life into the old tonal system, bringing forth music that is both immediately familiar and utterly modern at the same time. The sobriquet Minimalism may not be to the liking of many a Minimalist—Glass himself has referred to his own output as ‘music with repetitive structures’—but, that the name sticks is only recognition of a significant and distinct movement in the music of our time.

From the mid 1960s to the early 90s Glass completed eight String Quartets, though the three earliest have been withdrawn, presumably as journeyman works. He speaks for the majority of his fellow composers down the ages when he explains, ‘It’s almost as if we say we’re going to write a string quartet, we take a deep breath and we wade in to write the most serious, significant piece we can.’ His five string quartets, as a whole, exhibit the intense introspection that this genre, perhaps above all others, inspires. From the later quartets of Haydn, through Mozart, Beethoven and the Romantics and onwards to Bartók, Shostakovich, Hindemith and Elliott Carter in the Twentieth Century, the string quartet has held composers in its thrall. It is one of the prime forms that can, through time, seriously cement a composer’s reputation or, at worst, consign major talents to the wasteland of the middle-ground. Glass’s string quartets happily flaunt their influences which range from Bach to Shostakovich, but range well beyond the musical sphere, delving deeply into every major art form. He has always responded instinctively to extra-musical sources: painting, film, theatre, dance and literature are constant catalysts for his inspirations and enquiring mind.

The String Quartet No 1 dates from 1966, not long after Glass had completed his composition studies in Paris with the redoubtable French pedagogue, Nadia Boulanger. Pierre Boulez and his established Parisian avant-garde failed to hold the young American in their thrall and he turned to other, less readily radical sources. One such source that proved of real significance was a commission by the former drunk, drug addict and some-time film-maker, Conrad Rooks, to transcribe Ravi Shankar’s score for the bizarre film, Chappaqua for conventional Western instruments. The cyclical structures and rhythm patterns of Indian music afforded Glass the first glimmerings of what he would develop into a style he might call his own. The first of his mature quartets, while not exhibiting any explicit link to Indian music, does employ certain repeating patterns and cyclical procedures. Although the style is leaning towards more original works to come, eg the use, when performed live, of a two minute theatrical pause between Part 1 and Part 2, the pulse is not yet entirely stable and the harmony retains a good sprinkling of chromatic writing, the drones and short motifs, in particular, occasionally bringing Shostakovich in melancholy mood to mind.

It was some 17 years before Glass felt the need to return to the quartet form. The intervening two decades witnessed the perfecting of his style, his ‘music with repetitive structures’, through compositions spanning the musical spectrum. There were significant operas (Einstein on the Beach, Akhnaten and Satyagraha), music for dance, film, theatre and, perhaps most notably, an important body of work for his Philip Glass Ensemble. The String Quartet No 2, ‘Company’ (1983) was written as four separate musical interpolations for Samuel Beckett’s prose-poem, Company. As often with Beckett the themes of death, solitude and the nature of identity loom large—the opening line setting the theme, ‘A voice comes to one in the dark. Imagine.’ Glass’s music reflects these themes in music of often surprisingly intense lyricism. There is no real sense of Beckett’s own insistence—emotional angst, but instead a beautiful wistfulness that is a serious counterpart to the text and also serves the piece well in its abstraction as a standalone work.

The String Quartet No 3, written in 1985, is the only quartet which has an explicit programme, each movement clearly labelled. This is entirely due to its genesis as music for Paul Schrader’s film on the life of author, playwright and selfstyled, latter-day Samurai, Yukio Mishima. The film, Mishima: A Life in Four Chapters, employs three distinct musical outfits: full orchestra for scenes portraying Mishima’s writings; string orchestra depicting Mishima’s unworldly last day as his own militia usurps one of Japan’s defence force headquarters; and the scenes for quartet which were shot in monochrome, composed for childhood flash-back scenes. As such, they often have a wistful, sometimes joyful, carefree feel. While this piece, like its predecessor has extramusical connections, Glass was aware from the outset that the string quartet sections might work well when freed from the score and given a life of their own, as a single, complete utterance, in the concert hall.

The early death from complications of HIV/AIDS of the artist, Brian Buczak was the spur for Glass’s String Quartet No 4, ‘Buczak’. Together with the quartet’s commissioner, Geoffrey Hendricks, Buczak had established the Money for Food Press, initially as a vehicle to further their art practises. The MfFP traced its roots back to the New York based early multi-media experiments of the Fluxusart movement of the 1960s—and one of Hendricks’ early ‘Cloud’ images was appropriated for John Lennon’s Imagine album. Written for a memorial concert for Buczak in 1989, Glass wanted his fourth quartet to represent, ‘a musical impression of [Buczak] as a person as well as a tribute to his life’s work.’ The quartet opens with a broad, almost Schubertian sweep before the composer’s familiar pulse gently introduces itself. Touches of Schubert and Beethoven pervade the quartet while Glass produces an astringent lyrical beauty, most notably in the second movement, that well befits a heartfelt memorial.

Just two years later, in 1991, Glass produced his fifth, and so far final, quartet. Prior composing the work the composer later explained, ‘I was thinking that I had really gone beyond the need to write a serious string quartet and that I could write a quartet that is about musicality, which in a certain way is the most serious subject.’ Indeed, the work succeeds brilliantly perhaps by virtue of the composer’s less deliberately contemplative approach. Both Romantic and thoroughly modern, the music is by turns, insistent, luminous, incandescent and dark—ultimately a triumphantly successful exercise in contrasts and a truly great string quartet.