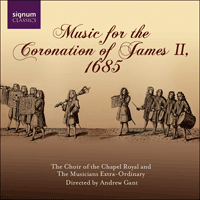 Music for the Coronation of James II, 1685

The Choir of the Chapel Royal, Andrew Gant (conductor)

With a stunning selection of choral music that is truly fit for a King, Andrew Gant leads the Choir of the Chapel Royal & The Musicians Extra-Ordinary to re-create the music that accompanied the coronation of James II and Queen Mary in 1685.

'The men and boys of the Chapel Royal under Andrew Gant bring history to vivid life. Recommended' (Classic FM)
'I have played this CD twice during the week received, and recommend it unreservedly' (MusicalPointers.co.uk)» More

We owe this sumptuous description to Francis Sandford, who attended the Coronation in his capacity as Lancaster Herald. Keen to ingratiate himself with the new regime, Sandford produced a detailed record of the preparations and the ceremony, commissioned a whole series of engravings of the event from an engraver named Moore, and had a large number of copies printed and handsomely bound at his own expense. Every notable person would wish to be associated with the new King and would rush to furnish their shelves with such a clear token of their loyalty and enthusiasm. Alas for Sandford. The seeds of James’ downfall were already sown. The day before the coronation he had attended a private ceremony of anointing in the Chapel at St James’ Palace (where this recording was made), conducted by his confessor Padre Mansueti, a foreigner and, worse, a Catholic priest. James confounded the offence by openly paying little attention to the Protestant ceremony in the Abbey, though having no qualms about swearing to uphold the Church of England; a transparent lie. Queen Mary behaved rather better, and 'answered Amen to every prayer with much humility, … showed herself perfectly instructed in what she had to do and acted throughout with great grace and composure' according to a letter to her brother the Duke of Modena. But James’ open Catholicism cost him public support and soon cost him his throne. For Sandford the cost was, if anything, even greater. Nobody wanted to be openly associated with this King, and nobody bought his book. Sandford died in poverty.

The music
The choir’s first duty was to process from Westminster Hall to the Abbey singing William Child’s anthem O Lord, grant the King a long life. Sandford’s picture vividly shows the Children and Gentlemen of the Chapel Royal singing from small music books as they walk, with three instrumentalists, Edmond Flower, Henry Gregory and Theophilus Fittz, in their midst, playing what Sandford calls two sackbuts and a courtal. Writers have disagreed about exactly which instruments Fittz and his colleagues were playingthe courtal in the picture looks more like a cornett, which is the natural partner for the sackbut. These instruments were certainly rather old-fashioned by this time (though there was music composed for them after the Restoration by, among others, Matthew Locke), but would have done excellent duty for keeping the large and elongated choir in time and pitch for its al fresco rendition. Records of later coronations suggest that the choir alternated with the brass to make the processional pieces longer: a possible version is given here.

Child’s anthem was not composed new for the occasion (indeed, given that he was by now nearly 80 years old Child can be applauded for turning out at all). Once in the Abbey the choir broke into the first of the specially-composed works, I was glad by Henry Purcell, Child’s junior by more than half a century. There are two anthems which are candidates for this slot. For very many years it was assumed that Purcell’s verse anthem with strings was sung. This setting was probably made a year or two earlier for the Chapel Royal, though Purcell may have revised it for this occasion. The other candidate is a five-part full anthem. The earliest source, the normally reliable James Hawkins, ascribes this not to Purcell but to John Blow and it is only relatively recently that the younger composer has been suggested as the author. The claims for this anthem include; that Sandford clearly calls this a full anthem and gives the text of the full setting, which is slightly different from the verse setting: that the verse anthem is too long for the relatively short procession: that singing verses in procession is less easy in practice than singing a full anthem. The verse anthem can counter these claims; Sandford may simply have made a mistake in his text and appellation (there are others—in the same section he calls Purcell Organist of St Margaret’s Church, Westminster, which he was not, he gets the text of one of Blow’s anthems wrong too, calling it Behold, O Lord instead of Behold, O God, and one of his engravings gives the Abbey the wrong number of bays): as to the length of the procession, the current writer can point out from experience that processions at grand services in the Abbey and other large public buildings always involve a good deal of robe-adjusting, seat-finding, verging, bowing and nodding to guests as well as the actual walk up the aisle, not to mention the monster-sized choir peeling off from the procession into a number of different galleries, presumably via obscure temporary wooden staircases, all of which takes time—indeed the repeated little chorus at the end of the verse setting may be an optional repeat ad lib to lengthen the music—and in any event it is always better to have slightly too much music to be listened to in dignified repose having completed the procession than an embarrassing silence and scramble for places because the music is too short and has finished: similarly, my own experience is that singing the complex five-part polyphony of the full setting, with its changes of tempo and mood, in procession with the size of forces involved would be more or less impossible (where would the conductor be?), whereas nothing could be easier than a single soloist keeping in time with a small continuo section at the other end of the Abbey by simply listening—it is striking that the verse sections alternate with the string orchestra rather than combining with them, and all the early verse sections are for one voice alone, the only full section of the anthem coming right at the end when the choir is safely established in the places where they sing, firmly under the control of Dr Blow leaning precariously from his gallery to beat time.

The scholars of Westminster School (Purcell’s old school) greeted the arrival of the Queen with the traditional shouts of Vivat, followed by John Blow’s four-part setting of Let thy hand be strengthened and the Litany. No record exists of the musical setting intended for the Litany, nor of how much of it was sung, but Tallis seems the most likely candidate for the music. A suitable selection of verses is included here. There followed the anointing, the very heart of the coronation ritual. An English version of the hymn Veni creator was used, using for the first time the translation by John Cosin, slightly shorter than the earlier version. Sandford tells us the hymn was 'composed or set by Mr William Turner, Gentleman of His Majesties Chapel Royal'. No music survives: one interpretation of Sandford’s unusual use of the word 'set' is that this was sung to a chant, several of which by Turner survive. Then comes Zadok the Priest. Sandford tells us this was 'composed by Mr Henry Laws'. The only surviving setting by Lawes is that from the previous coronation, of Charles II in 1661, though the text of this setting differs both from Sandford and from the Order of service. Lawes himself died in 1662, so if the setting was altered in text or music, it was by another hand and no record of it survives. The 1661 version is sung here. The surviving music of this anthem includes the bass only of an instrumental symphony: I have composed a symphony to this bass and taken the opportunity to add the instruments which we know were present to the remainder of the piece, giving a certain martial dignity to an otherwise rather plain setting. Blow’s five-part Behold, O God our defender follows, and then another anthem by Turner, referred to by Sandford in its Latin title Deus in virtute. This is the traditional text The King shall rejoice in thy strength, O Lord, and Turner’s music is lost, but in the reverse process of moving the Lawes from the 1661 coronation, Turner’s anthem is here sung to the setting he provided for the 1702 coronation of Queen Anne (with the word 'Queen' changed back to 'King', naturally). Indeed, it is possible that the 1702 version is a recomposition of the 1685 anthem, as Blow was to do with 'Behold, O God' for the 1689 coronation of William and Mary. 'Te Deum' is next, in a setting by Child. There is no indication as to which of Child’s several settings was sung: the setting included here was published in Arnold’s Cathedral Music. A little variety is injected by the use of instrumental accompaniment.

The coronation ended with the homage to the King, the occasion for the grandest musical statements of this or any other previous coronation, and possibly of any since. John Blow provided an awesome architectural structure in God spake sometime in Visions, (sung while the peers paid homage to the King), the constant varying of mood, texture, speed and colour perfectly reflecting the text with its moments of martial splendour, tenderness, reverence and prayerfulness. It can only be regretted that this anthem was too grand for the more modest tastes of the subsequent Stuarts and has not, to date at least, been sung at any subsequent coronation. Purcell’s magnificent My heart is inditing was sung after the Queen’s coronation, while she was enthroned next to her husband. The anthem makes a feature of the text’s references to the Queen, naturally enough. The two men seem to vie for honours in the brilliance of their string symphonies, the complexity and vigour of their eight-part choral writing (in the rather odd division of two treble, two alto, one tenor and three bass parts, no doubt accounted for by the bevy of basses provided by the combined choirs), the variety of their verse sections (always for solo voices in combination, never a single voice), and their melodic and harmonic inventiveness. They seem to be comparing ideas and daring each other on, as they surely did in their daily musical collaboration in the Chapel Royal: the most daring change of harmony, or indeed the most daring non-change of harmony—Blow gives us four bars of root position C major at thy hand shall hold him fast, Purcell four bars of root position G major at Peace be within thy walls in the earlier verse anthem. The music of this coronation has a huge arching shape, from the brazen fanfares of the opening through the smaller, more old-fashioned and more modestly-proportioned pieces in the middle to the glorious peroration at the end: a shape which is as satisfying to us when we listen through to the music today as it surely was to the men who designed it and clothed it in the glorious apparel of their music.