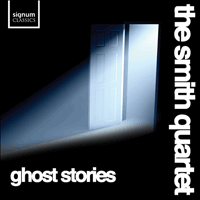 'If Souster's piece is a reminder of a talented composer who died far too young, then Montague's First Quartet is a memorial of another kind, written explicitly to honour two of his composer friends and driving itself to a ferocious, angry climax' (The Guardian)» More
'As versatile as the Kronos Quartet, and smoother than the Brodskys, The Smith Quartet have edged ahead of their competitors in contemporary chamber music' (The Independent on Sunday)» More

Hambledon Hill (1985)
Hambledon Hill is an imposing prehistoric hill fort which haunts the English countryside situated in the Blackmore Vale in Dorset. Its earliest occupation was in the Neolithic when a pair of causewayed enclosures were dug at the top of the hill. They were linked by a bank and a ditch in which human skulls were found giving rise to the belief that at one time the causewayed enclosure was used as a mortuary for the ritual disposal of the dead.

In searching for a structure for his string quartet and contemplating the relationship between the acoustic sound of the instruments, their amplified sound and the modification and extension of their sound on tape, Souster stumbled on his basic shape; three concentric circles. Realizing that this was the basic layout of the Iron Age hill fort the ancient structure was to be the main influence for his work.

In performance, the concentricity governs not only the layout of the players surrounded by two rings of loudspeakers but also determines the harmonic and melodic structure, the instrumental groupings within the quartet and, in a sense the overall registers of the whole work which moves in a circular progression from high to low and back again.

The old woman of beare (for string quartet & live electronics)
Perhaps the most striking feature of this piece is the intersection of very diverse elements: an Irish 9th Century anonymous poem, a group of instruments (string quartet) whose roots lie in the Western art music of several centuries ago, Irish traditional music (the inflections and latent energy of which have had an influence on this piece), and the responsive and expressive sounds which are possible with the use of live electronics.

Much of the musical material is inspired by three versions of the text: the original old Irish, an 18th century translation, and a modern translation of the text by the Irish poet Brendan Kennelly. All three provided rich landscapes for word painting and for capturing the heightened emotions expressed in the text.

The poem relates the thoughts of an old woman who is nearing the end of her life, living a monastic existence amongst nuns. She recalls her youth with pride—a time when she had many lovers, a time when she “drank wine with kings”—and she derides the way young women treat their lovers today. Her ailing health, perhaps related to her wilder youth, provides a counterbalance to these thoughts and reminiscences. The old woman’s presence is a ghostly and other-worldly spirit which the quartet summon through ritualistic material.

The piece, which is one continuous movement, follows closely the pace and dramatic structure of the Kennelly translation. The outer sections of the piece explore materials based on Irish traditional music, borrowing some of its many ornaments and harmonic techniques, whilst the inner sections explore a more experimental musical language.

The piece, commissioned by the Xebec Corporation, Japan, was written for the Smith String Quartet in 1994. The technology employed for the original performance was an IRCAM Signal Processing Workstation and the now obsolete NeXT computer workstation. The work was one of the earliest pieces in this genre to explore the potential of computer-based live electronics (in this case the ISPW which was a precursor to Max/MSP) as a live performance system.

The sinking of the Titanic (1969)
This piece originated in a sketch written for an exhibition in support of beleaguered art students at Portsmouth in 1969. Working as I was in an art college environment I was interested to see what might be the musical equivalent of a work of conceptual art. It was not until 1972 that I made a performing version of the piece for part of an evening of my work at the Queen Elizabeth Hall, London and during the next three years I performed the piece several times. In 1975 I made a recorded version for the first of the ten records produced for Brian Eno’s Obscure label. In 1990 I re-recorded the piece ‘live’ at the Printemps de Bourges festival when the availability of an extraordinary space and the rediscovery of the wreck made me think again about the music. This version also formed the basis for the 1994 recording on Point.

This new version, much shorter than previous ones, was written especially for the Smith Quartet, a group with which I have had a long and fruitful relationship.

All the materials used in the piece are derived from research and speculations about the sinking of the 'unsinkable' luxury liner. On April 14th 1912 the Titanic struck an iceberg at 11.40 PM in the North Atlantic and sank at 2.20 AM on April 15th. Of the 2201 people on board only 711 were to reach New York. The initial starting point for the piece was the reported fact of the band having played a hymn in the final minutes of the ship’s sinking in an extraordinary act of self-sacrifice. The ship’s junior wireless operator Harold Bride identified this hymn:

' …from aft came the tunes of the band … The ship was gradually turning on her nose—just like a duck that goes down for a dive … The band was still playing. I guess all of the band went down. They were playing Autumn then. I swam with all my might. I suppose I was 150 feet away when the Titanic, on her nose, with her afterquarter sticking straight up in the air, began to settle slowly … The way the band kept playing was a noble thing … the last I saw of the band, when I was floating out in the sea with my lifebelt on, it was still on deck playing Autumn. How they ever did it I cannot imagine.'

This Episcopal hymn becomes the principle element of the music and is subject to a variety of treatments and it forms a base over which other material is superimposed. Although I conceived the piece many years ago I continue to enjoy finding new ways of looking at the material in it and welcome opportunities to look at it afresh.

Some of this material might seem puzzling but it is all rooted in fact. The sound of a football crowd ('like 100,000 people at the cup final') and the sound of crickets in a field in Pennsylvania are two of the similes used to describe the sound of people in the water (and the recordings I use are precisely those: of a cup final crowd, and of crickets recorded in the fields of Pennsylvania). The music box plays the tune La Maxixe just as did the one in the toy pig that Edith Russell used to amuse and distract children in the lifeboat. The speaking voices are those of survivors, Edith Russell and Eva Hart, who I interviewed in 1972 just before the first live performance of the piece.

Memento
A brief movement for string quartet, Memento was written in memory of a friend, David Huntley, the representative of Boosey & Hawkes in the USA, who died in 1994. It was premiered at his memorial concert in New York by the Kronos Quartet. The music is slow, delicate and tentative and is based on the modality of Gaelic lament music and the Gaelic heterophony of psalmsinging in the Hebrides.

String Quartet No 1 'In memoriam …'
String Quartet No 1 is in memory of two close friends who died within a short time of each other. In May, 1987 Barry Anderson (52) died unexpectedly a few hours after the disastrous Paris premiere of his new IRCAM commission, ARC, for bass clarinet, string quartet and electronics. The following year Tomasz Sikorski (49) lost his long battle with alcoholism. He died alone in his dreary Warsaw flat, slumped over his desk undiscovered for over a week. Both men were fine composers with growing international reputations.

Barry Anderson’s music was firmly based in the post-Webern idiom, dissonant but elegantly crafted with brilliant computer generated sounds. He was refined, urbane and dapper. Tomasz Sikorski was not. He was well known as a difficult character. His personal life and his music were battlefields with considerable collateral damage. His musical idiom was minimalism but in his hands repetition was more to bludgeon than to entertain.

String Quartet No 1 'In memoriam …' is based on a metaphor of ‘white noise’ as the Life’s last breath and uses short thematic and harmonic material from each composers’ works: Barry Anderson’s ARC (1987) and Tomasz Sikorski’s Holzwege (1972) for orchestra. The opening bars of Holzwege (‘Paths to Nowhere’) are quoted in the closing bars of the quartet.

Although the work was premiered by The Mistry Quartet in 1989 it underwent considerable change and development with the numerous subsequent performances by The Smith Quartet. Their performances culminated in the composer’s final version which they premiered at London’s South Bank Centre in 1993. The work was recorded a few weeks later during a late night session in a lonely north London church. About half way through the session a body was delivered which lay in state just in front of them flickering in pale candlelight.