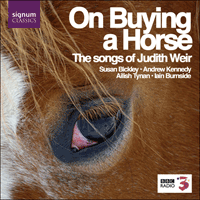 On buying a horse & other songs

With works ranging from minature to epic, these songs showcase the originality and talent of one of music's great storytellers. Superbly accompanied by Iain Burnside, these strong performances masterfully bring together Weir's diverse range of literary and musical influences from many international sources, including China, Africa and Serbia as well as her native Scotland.

'Judith Weir brings out the very best in musical performers' (Gramophone)
'Along with pianist Iain Burnside, the performances by mezzo Susan Bickley, soprano Ailish Tynan and tenor Andrew Kennedy match the jewel-like clarity of the songs' (The Guardian)» More

It is songs, on the whole, that make the musical world go round; but ‘contemporary classical’ composers don’t seem to write them very much these days. During the times when I was writing the many parts of this collection, I felt I was taking a holiday from the world of new music to practise an ancient craft.

No one thing led me to write these songs these ways. Sometimes it was the voice, the words, the pianist, the occasion, usually a combination of several. I have no idea why one singer ends up with Chinese philosophy whilst another has to sing a Serbian song about trousers. Finding the right words is one of the most enjoyable parts of the exercise, although increasingly problematic as I find myself searching the same sources again and again.

On buying a horse (1991) was written for a concert given in aid of an animal charity. They probably weren’t crazy about this quick blast of peasant cunning, which advises anyone offered a horse with the wrong markings to 'tear off his hide and feed him to the crows'.

Originally scored for three singers and small orchestra, Ox mountain was covered by trees (1990) was written to commemorate the life and sudden death of Kent Opera, an inspirational force in the English artistic landscape. The text, from the (4th century BC) Confucian commentator Mencius, muses on the long term effect of continually cutting things down.

Josephine Nendick, known for her elegant, pioneering performances of Boulez, Nono and beyond, commissioned Songs from the Exotic (1987) to mark her retirement from professional singing. She was accompanied at the piano by Michael Finnissy, whose sophisticated yet humane re-inventions of folk music greatly influenced this piece, in which vernacular poetry from Serbia, Spain and South Uist is heard from my own, far-removed, musical point-of-view.

Scotch minstrelsy (1982) was commissioned by Glasgow University’s McEwan Bequest for the tenor Neil Mackie, whose simple and unaffected performances of Scottish folk songs I greatly admired. Intending to write a companion piece for this pleasant repertoire, I made a selection of much abbreviated Border Ballads; but on closer examination, the grisly happenings of these familiar poems came as a shock, and the resulting songs are histrionic and nervous, though framed by ‘beautiful’ piano accompaniments, just as Scotland’s violent past is obscured by its abundant scenery.

Alice Coote was the dedicatee of The voice of desire (2003), which takes its title from its opening song, about nightingales, by Robert Bridges. Each of the four poems in the cycle (by Bridges, Hardy and Keats, alongside a Yoruba Huntsmen’s song) is sung by a bird, whose perspective is more sophisticated than its uncomprehending human listener realises. The nightingale lives in a darker emotional world than we can imagine; the blue cuckoo knows that the wars we blunder into will bring destruction; the thrush sings joyfully whilst we are mentally blank; the dove has died rather than face emotional suffocation from its adoring owner.

Two magnificent (anonymous) Spanish romances from the sixteenth century, and a sly ballad provide the poetry for A Spanish Liederbooklet (1988), written for the soprano Eileen Hulse. Although the music was created as a very direct response to what the words are saying, listeners have remarked that the music ‘sounds Spanish’, and it may well be that the basic melodic and rhythmic shapes of these songs emanate from the language itself.

King Harald’s saga (1979) asks a lot of its soprano soloist (originally the intrepid Jane Manning). She has to sing every role, including duets and choruses, in a huge but brief grand opera about the Vikings, as retold in the 13th century Icelandic saga, Heimskringla. Whilst appearing in many exciting guises, she also presents her performance as a radio broadcast, giving helpful explanations of the opera’s three acts before leaping back into character.

The medium of radio also inspired the short song Ständchen (1997). During Schubert’s bicentenary year, BBC Radio 3 invited many composers to choose one of his song texts and set it again. Separated from one of Schubert’s greatest-ever melodies, Rellstab’s verse still has a gentle, wistful charm whose muted, nocturnal atmosphere I have attempted to capture.

Judith Weir is a magic realist, the Gabriel García Márquez of song. Once you enter her world it seems entirely reasonable that fairies should run off with a Hebridean baby, a turtle dove should berate a nightingale, and a sailor should calm the winds with his special secret song. She is also a storyteller. If her operas tell complete stories, these songs are like postcards. You will look in vain for back-stories or follow-ups. What were Bessie Bell and Mary Gray up to in their bower? How many white feet did the horse have? And how did Bey Pivlyanahin counter Bey Lujibovic’s outrageous jibe about the lacy apron? Maddeningly, Weir never tells us. She drops her pebble in the pond and walks away smiling.

On this disc a huge amount happens. Battles are fought, heads are chopped off. Wherever you look people keep dying. Most of them in Scotland. Judith Weir’s Scotland is a cruel, dark place, suffused with sinister magic. Her Serbia is little better, though at least it yields more laughs. Her songs are songs from the exotic indeed. Weir’s magic carpet takes us both north and south within Europe, then on, in parallel with her operas, to Africa and China. Her nose for texts is one the great delights of this collection: how she roots out poems or prose from so far afield then combines them in a way so fresh and utterly personal. Setting John Keats is not in itself remarkable; twinning him with African folk poetry is.

As is the quiet pizzicato tango that underpins Keats’s little white dove. But then Weir’s choice of piano texture is another mark of her originality. She makes the instrument speak in a way entirely her own, often with the simplest of means. The atmosphere of Lady Isobel’s adventure with her Elf Night is established by just two notes rocking backwards and forwards, somehow both dangerous and witty. The first song of Scotch minstrelsy has the disc’s most extended piano writing: it is less asong, in fact, than a piano piece with vocal commentary. A single line, blurred and irregular in its pedaling, branches into two then goes back to one again. The plague, we learn, is breaking out by the River Almond, in Perth in 1645. Weir’s music is watery, yet also diseased. None of her sharp primary colours here: this piano writing is all shades of grey and murky brown.

Her use of the voice is no less remarkable, changing in response to her vocal as well as her poetic Muse. Ironically the most performed work on this disc is also the most fiendishly difficult. King Harald’s saga is a vocal commando course, where only future SAS members need apply. A jeu d’esprit simultaneously testing and celebrating Jane Manning’s legendary powers, King Harald has taken on a life of his own, through plucky singers relishing challenge and plucky audiences finding unexpected delight in this vocal tour de force. Different voices inspire dark Balkan chestiness in the Nevesinje area and high soprano brilliance when Spanish honour is at stake. The end of Ox mountain uses impassive Maoist declamation. Her simplest, most tender vocal writing comes in our final Ständchen, as near as Weir gets to a conventional lovesong. Here, though, the earnest serenader is not her focus. Do you hear the nightingales? he asks his lover. The girl is unlikely to miss them: casually mentioned by Rellstab, ignored by Schubert, these birds are what this song is all about.

But then birdsong runs as a leitmotif through this disc: a source of wisdom; the connection, in the case of Hardy’s Darkling Thrush, with a higher plane. The voice of desire explores this idea in four brilliantly differentiated ways. Weir has made her own version of Waltraute’s Narrative from Wagner’s Götterdämmerung. The birds in the Ring cycle know a thing or two, as well: the Wood Bird enlightens Siegfried, and ravens fly over him just before he gets stabbed in the back. Like Wagner’s, Judith Weir’s birds are one step ahead of the game.