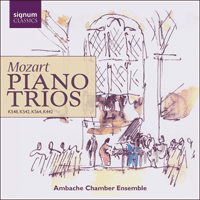 In celebration of Mozart year, the 250th anniversary of his birth, Signum Records are pleased to present, 'Mozart Piano Trios'!

On this disc, three of the six Mozart piano trios are featured along with one of the three separate trio movements which he left unfinished.

'In terms of general style the group’s Mozart comes across with an exceptional classical purity of expression. No forebodings of romantic daring are allowed to undermine their world of well-ordered finesse' (Gramophone)
'The performances by the Ambache Chamber Ensemble are … even in quality' (Classical Music)» More

In Mozart’s day Vienna was described as clavierland, since almost every house had a keyboard instrument of some kind. Musical accomplishment was important at that time. The Viennese correspondent of the Salzburger Musikzeitung wrote 'Every girl of refinement, whether she has talent or not, must learn to play the piano or to sing; in the first place it is the fashion, in the second it is the easiest way to appear charming, and thereby, if luck will have it, to make a good marriage.'

Mozart wrote a lot of chamber music, partly because he loved it, and partly to make money from publication. Perhaps it is slightly surprising that he only wrote six Piano Trios. The publishers’ subscription lists show that the amateur performer was the chief customer for new music of this type. This amateur music making, with its emphasis on social attraction, had its effect on the nature of the music written in this genre. Differing from the finely integrated string quartet, the piano trio was inclined to be lighter, frequently tuneful and playful. The combination of tonally dissimilar instruments made it difficult to create equality in piano trios; the piano generally has the leading role, despite attempts to bring the violin and cello to the fore. Indeed some of the Mozart Trio piano parts have been described as concerto-like.

The works on this disc come from Mozart’s last three years. They were probably written to sell by subscription, to alleviate his cash flow problems. Mozart did not write in a manner particularly suited to the audience he was addressing, (not for the first time), frequently creating music of a technical and emotional complexity beyond the 18th century amateur enthusiast; but we now appreciate them for the artlessness of great art that is one of the core qualities of his music.

Having been the darling of the musical Viennese early in the 1780s, by the end of the decade Mozart was out of favour, and his life at this point was not a bed of roses. He was having serious trouble earning a living as a freelance composer/performer; this is illustrated by the famous begging letters to Mozart’s friend and Masonic brother Michael Puchberg, which are contemporary with the three Trios on this recording.

They date from the same year as his last three symphonies (1788) and some people think that Mozart had planned to present them together, in three concerts, each featuring a Trio and a Symphony.

Piano Trio in C major, K548
This Trio was written, in the summer of 1788, between the great E flat (K543) and G minor (K550) Symphonies. With no sharps or flats, C major is an open key, which Mozart frequently used for celebration. He regularly associated particular keys with characteristic moods, as can be heard in these Trios. The first motif from K548 instantly recalls other C major works, such as the opening of the Jupiter Symphony or the Piano Concerto K467. This very affirmative, unison start suggests a carefree atmosphere. However, as frequently happens with Mozart, just when you think you’ve got the hang of the first Allegro, it has new and magical ideas which take us to unforeseen grounds. The expressive sighs of the beginning of the middle section grow into anguished cries later in the development. The Andante is a gorgeous, heartfelt aria like movement; the final Allegro is teasing and flirtatious.

Piano Trio in E major, K542
Mozart rarely used E major in his instrumental works; however it appears more often in his operas. It has some pastoral associations: Ilia contemplates the garden where she will meet her lover, and the chorus in Idomeneo gazes thankfully at the calm sea—Placido è il mar (The sea is calm, let us go); it is also heard in Soave sia il vento in Cosi fan Tutte. Sometimes he uses it as a key of apology: Fiordiligi tells the absent Guglielmo how she regrets her thoughts of infidelity.

The E major Trio is almost unique in Mozart’s instrumental oeuvre, because of its key. He seems to have been pleased with it, and sent it to his sister is Salzburg requesting her to play it to Michael Haydn, saying 'He will not dislike it.' The music has elusive qualities. The singular aura partly comes from bold harmonies and surprising modulations in the opening Allegro, the tenderness of the Andante, and the concertante elements in the Finale.

Piano Trio in G major, K564
Although G major is another open-hearted key, it has a little more warmth and intimacy than C major. This is another subtle work, and charm is the main characteristic of the Trio in G. A piano sonata served as the basis for the work, and Mozart’s craftsmanship can be seen in the clever way he was able to write completely independent parts for the two string players. The C major Theme in the Andante has a slightly naive, folk quality. Each player takes a turn with the theme to create a sequence of captivating and entertaining Variations. The fifth of the set, in the minor, has an somewhat unearthly atmosphere, which is speedily banished by the cheeky last Variation. The Finale is in a lilting 6/8 rhythm; in its more discreet moments it is almost an aristocratic Siciliano, while at other times it has a more rustic and Ländlerish swing.

Triosatz in D major, K442
As well as the six complete Piano Trios, Mozart also wrote three separate trio movements, which he left unfinished. The D major Allegro was probably written around 1788-90. Mozart’s colleague the Austrian composer, historian and keyboard player Abbé Maximilian Stadler (1748- 1833) did the completion; short of being Mozart, he did a pretty good job. Mozart wrote 133 bars of the final 228 bars. D major is often used by Mozart for brilliance and strength. This Triosatz starts with a horn call, and then romps along in a spirit of festivity.