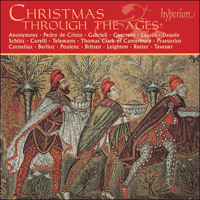 Christmas through the ages

'Other than to assure you that it works for me, need I say more?' (Fanfare, USA)
'If Christmas music is on your agenda–for yourself or for your best friends or most favored family members, this disc['s] original sources should make an ideal choice' (Classics Today)» More

Of all the seasons in the Christian Church year, Christmas has produced by far the most—and most joyous—music. The 2000-year-old story of Christ’s birth has provided a wealth of images to inspire composers and pictorial artists through the ages—angels, kings and shepherds, a star, animals around the manger, Mary and Joseph, and of course the baby Jesus himself; all have been the subject of countless songs and motets, cantatas and oratorios, organ, orchestral and piano pieces large and small, from the simplest carol to The Christmas Oratorio of Bach, Berlioz’s L’Enfance du Christ, and Messiaen’s Nativité du Seigneur for organ and Vingt Regards sur l’Enfant Jésus for solo piano. The mystical fact of the Nativity too, without pictorial aid, has given rise to an immense amount of music from the most exalted polyphony to exuberant Italian concerti grossi. Much of this music was written for liturgical purposes; most of it wasn’t, being written instead for secular enjoyment and celebration of the spiritual event.

This compact disc has been compiled from a score of Hyperion recordings featuring innumerable works—mainly vocal but some instrumental—from the above categories, drawing on music from the last eight hundred years. Because of the richness of the repertoire available, the choice has been difficult and there are inevitably many omissions. All of the pieces are complete in themselves, though a few are movements or sections drawn from larger works (Schütz’s Christmas Story, Britten’s A Boy was Born, and movements from Italian string concertos). There is music from England, the Low Countries, France, Germany, Italy, Spain and Portugal. No fewer than nine choirs are represented.

Our programme begins with a Christmas song about the shepherds, the subject of at least three other pieces on the disc. The title While shepherds watched their flocks by night is familiar to all English speakers as one of the most famous carols of all. But few will know it in this form! It is an example of so-called ‘gallery music’, which flourished in English parish churches in the eighteenth and early nineteenth centuries. It was so called because the singing of the congregation was accompanied by instruments placed in the west gallery of the church. Truly ‘music of the people’, it had no pretensions to polyphonic sophistication, instead being tuneful and cheerful—sometimes almost riotously so. It was this which led to its eventual banning by The Oxford Movement in the middle of the nineteenth century, and gallery music was not heard again until the advent of scholarly research and compact discs. The piece (track 1) conjures up a vision of the shepherds of the Holy Land, without hats, tending their sheep on Yorkshire’s Ilkley Moor! In fact the tune is called ‘Cranbrook’ and it was written by Thomas Clark of Canterbury around 1804. The more familiar words were added to it much later.

Germany’s seventeenth-century composer Heinrich Schütz treats his shepherds in more conventional, though no less delightful, fashion. Track 2, ‘The Shepherds in the Field’, is taken from his oratorio, Die Weihnachtshistorien (‘The Christmas Story’) dating from around 1660. Also German was Michael Praetorius, and he too depicts the shepherds on track 22, this time in Latin. A French portrayal of the shepherds comes in Berlioz’s oratorio L’Enfance du Christ (‘The Childhood of Christ’), represented on track 17. Here the shepherds bid farewell to the Holy Family before their flight into Egypt to escape Herod’s assassins.

The earliest music on our album may be heard on tracks 3 and 4, though no precise dates can be assigned to the two pieces. The anonymous Procedenti puero is thought to date back at least to the thirteenth century. It is English. It is followed without a break by Riu, riu chiu, a traditional Spanish shepherd song, transformed into an irresistible dance. Thought to date from medieval times, the title is untranslatable. Both of these songs are secular—that is, not written specifically for liturgical use—and have a strong ‘folk’ feel to them, unlike the two Iberian items, the Spaniard Francisco Guerrero’s La luz de vuestros ojos (‘The light of your eyes’, referring to the Virgin Mary, track 5) and the Portuguese Pedro de Cristo’s Hodie nobis de coelo (‘This day, unto us true peace descended from heaven’, track 21) which are liturgical compositions such as might have been heard in Lisbon Cathedral in the middle of the sixteenth century.

Other sacred Christmas motets come from the sixteenth-century Franco-Flemish composer Orlandus Lassus (track 14, Omnes de Saba) and from the Italian Giovanni Gabrieli whose magnificent Salvator noster (‘Our Saviour, the chosen one, is born today’, track 8) for three five-part choirs and continuo was written sometime before 1615.

Many Italian instrumental composers, too, were inspired by the Christmas story. Two of them are represented here. Track 15 provides one of the movements from the famous ‘Christmas Concerto’ by Arcangelo Corelli, ‘fatto per la notte di natale’—literally ‘made for the night of the birth’. The concerto is the eighth of a set of twelve, Opus 6, published after the composer’s death in 1713. Other less well-known Italian composers of music ‘per il santissimo natale di nostro Jesu’ included Torelli, Schiassi and Giuseppe Valentini. A Gavotte from Georg Philipp Telemann’s Festive Suite in A major may be heard on track 6, taken from an album of Baroque Christmas music.

The eighteenth-century Frenchman Louis-Claude Daquin left a set of twelve Noëls for organ. Here is the first of them, slightly shortened (track 20), played by Christopher Herrick on the organ of St-Rémy in Dieppe in northern France. Like the others, it is a set of variations on a Christmas tune, and uses the organ’s ‘reed’ stops to portray the pastoral pipings of the shepherds.

A hundred years later, the German composer Peter Cornelius was writing fine religious choral music. By far his most famous piece is Die Könige—usually known and sung in English as ‘The Three Kings’ (‘Three kings from Persian lands afar’). A beautiful and touching tune, it has moved many in the annual Service of Nine Lessons and Carols sung on Christmas Eve in King’s College, Cambridge. Here it is sung in the original German (track 18).

Track 16 presents perhaps the best-known music on the disc. Mendessohn’s tune for Hark, the herald angels sing was originally written in 1840 as a celebratory hymn to mark a festival in Leipzig commemorating the invention of printing. Scored for male voices and brass, it had nothing at all to do with Christmas. It was an English Mendelssohn enthusiast, William Cummings, who chose it after searching for a suitable tune to go with Charles Wesley’s words and it has since become one of the most well-known carols of all. The descant in the last verse was written by Philip Ledger.

The twentieth century has also seen a rich harvest of Christmas music in all forms, much of it arrangements of earlier traditional carols and tunes like Andrew Carter’s beautiful version of the ancient O come, O come, Emmanuel (Veni, veni, Emmanuel), sung (on track 19) by the choir of London’s St Paul’s Cathedral. Equally loved is the medieval Coventry Carol (track 10), here sensitively arranged for soprano (or treble) and chorus by the late Kenneth Leighton and titled Lully, lulla, thou little tiny child. From a medieval mystery play, the lullaby is sung by the women before the Massacre of the Innocents to put their children to sleep lest Herod’s soldiers might find them by their crying.

Benjamin Britten left us much striking and beautiful Christmas music, too, including his Ceremony of Carols for boys’ voices and harp, for which he chose texts from the fourteenth, fifteenth and sixteenth centuries, some of them, like ‘There is no rose of such virtue’, (track 12) anonymous. Not least among Britten’s Christmas works is the cantata A Boy was Born, written when he was a mere nineteen. Again the texts of these ‘choral variations’ are from earlier centuries. The one exception is Christina Rossetti’s well-known In the bleak mid-winter (track 9). Britten’s spine-tingling suspensions lead into a setting of the anonymous fifteenth-century Lully, lulley, the falcon hath borne my make away.

Another famous setting of In the bleak mid-winter is also included on our disc (track 7). This one is by Harold Darke, the organist and choirmaster of St Michael’s, Cornhill, in the City of London, for fifty years from 1916. He died in 1976.

The French composer Francis Poulenc left us much excellent choral music including a set of Four Motets for Christmastime, the first of which, O magnum mysterium (‘How great a mystery’) can be heard on track 13.

Our programme ends with a magnificent piece by a celebrated English composer of today, John Tavener. Among his many striking sacred works is the Christmas Proclamation: God is with us, written in 1987 for Winchester Cathedral in tribute to their organist and choirmaster Martin Neary. Here (on track 23) it is sung by the Choir of St George’s Chapel, Windsor Castle, with their organist Roger Judd ending it in resplendent fashion. ‘God is with us. Hear ye people, even to the uttermost end of the earth. God is with us. Christ is born!’