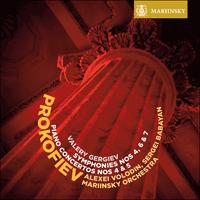 This major release launches the Mariinsky label’s project to honour the 125th anniversary of Prokofiev’s birth. A long-time champion of the music of Prokofiev, Valery Gergiev conducts Symphonies Nos 4, 6 & 7, performed masterfully by the Mariinsky Orchestra and coupled with Piano Concertos Nos 4 and 5. 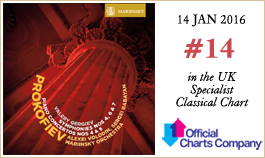 Piano Concerto for the left hand No 4 in B flat major Op 53
We now know rather more about the genesis of at least four of Prokofiev’s five piano concertos, thanks to the publication of his personal diaries kept from his student years at the St Petersburg Conservatory through to his years in Paris the early 1930s. The biographical detail they provide, though, does not necessarily give a more profound understanding of these works—certainly when it comes to the least known of the cycle, No 4, written for the one-armed Austrian pianist Paul Wittgenstein. As Prokofiev candidly admitted in his diary, when Wittgenstein originally proposed that he compose a concerto for left hand, he thought this 'a ridiculous notion', yet agreed to write such a work 'if the fee is decent, [since] it should not take me too long'. In the event, rather to Prokofiev’s surprise, Wittgenstein accepted his proposed princely fee of $5,000 (albeit, with a 10% commission cut taken by the pianist’s agents), and on 18 August 1930 Prokofiev signed an agreement to write the concerto, while noting in his diary 'I intend eventually to revise it for two hands'.

Yet one should not assume from Prokofiev’s evidently hard-headed, indeed mercenary approach to the project that he did not invest any of his genius in the work. Almost ten years separate that concerto from his previous concerto, the well-loved Third; and in the meantime Prokofiev—partly in reaction to the neo-classical style promoted by his rival, Stravinsky—had pursued a consciously modernist style in such works as his Quintet (1924) and his Second Symphony (1925). Both of these works, when performed, were received with almost universal incomprehension. This, and the precepts of Christian Science to which Prokofiev increasingly subscribed, persuaded him that he should create a more limpid and lucid style. This was first fully revealed in his ballet Le Fils prodigue (1929)—more on this work anon—and it was following this that he received Wittgenstein’s commission.

Wittgenstein insisted that his solo part should be fully audible in the new concerto, citing Richard Strauss’s recently commissioned concerto with its quadruple woodwind as exemplifying exactly what he did not want. Prokofiev accordingly relinquished his beloved tuba, reducing his brass section to a pair of horns and one each of trumpet and trombone. The orchestral palette of the Fourth Concerto is altogether more sombre than that of the Third, leaving the piano the unchallenged, sparkling centre of attention. Typical of Prokofiev’s new aesthetic is the finale’s brief recapitulation of the first movement’s themes—all save for an anguished passage of rising parallel ninths (first played by soloist and then taken up by strings), which is mysteriously expunged in that final review. Whether one cares to find this of symbolic significance or not (given Prokofiev’s determined return to Stalin’s Russia despite several warnings not to do so), one may still relish the restrained yet powerfully expressive slow second movement as a vintage example of Prokofiev’s ‘new simplicity’.

Piano Concerto No 5 in G major Op 55
Prokofiev’s diaries reveal even less about the genesis of his Fifth Concerto, since there is a break in their record from 31 December 1930 until 2 May 1932, the time when he started composing that work. It seems that it was his long-term champion, the conductor Serge Koussevitzky, who suggested that Prokofiev should compose another concerto to perform as soloist. However, Prokofiev’s increasing touchiness at this time about his reputation—surely a reaction to his recent rough handling in his native Russia, where his would-be Soviet ballet Le pas d’acier was condemned and effectively banned—meant he took increasing offence to Koussevitzky’s failure, as he saw it, to promote his latest works. In the end it was not Koussevitzky and the Boston Symphony Orchestra to whom he awarded the Fifth Concerto’s world premiere, but Wilhelm Furtwängler and the Berlin Philharmonic, whose playing had greatly impressed Prokofiev when they toured Paris early in 1931.

Prokofiev had originally planned to write a relatively simple work—hence its original title, Music for Piano and Orchestra. He soon realized, though, that the virtuosity of the piano part made it unavoidably a full-scale concerto, albeit with five rather than the usual three or four movements. At the end of May he began orchestrating his new concerto. That summer, he and his young family rented a refurbished farmhouse in Ste-Maxime for their holiday on the Mediterranean coast. Prokofiev appropriated the largest room, where he completed the Concerto and practised hard for its premiere. With his hectic concert schedule, Prokofiev was only able to attend one rehearsal before the Berlin performance, but found Furtwängler and the Berlin Philharmonic thoroughly prepared. The concert was a success, reviving Prokofiev’s reputation as a leading composer-pianist. It was, in fact, the last piano concerto he ever wrote, though he was to have a further two decades of creativity.

Unlike the previous concerto written for his own performance, the melodious and playful Third Piano Concerto, Prokofiev’s Fifth is a pugnacious work, with hard-hitting fistfuls of chords. Yet the brilliant glitter of its piano writing to an extent recalls the virtuosity of his first two concertos; and there is welcome respite, too, in the pastoral calm of the slow fourth movement, not only in the soothing flute and string introduction, but in the trickling piano figuration through which the principal opening melody may be heard played by woodwind. In that oasis of lyrical calm, one may hear the cool lyricism Prokofiev had started to cultivate with what he himself described as a ‘new simplicity’.

Symphony No 4 in C major Op 112
Prokofiev’s new lyrical style had been first unveiled in Le Fils prodigue, his final ballet composed for Diaghilev and Les Ballets Russes in 1928–29. Prokofiev’s music was widely credited for the particularly affecting power of the ballet’s final sequence in which the prodigal son is reunited with his father. When subsequently invited by Koussevitzky to write a major symphonic work to celebrate the Boston Symphony Orchestra’s fiftieth anniversary, Prokofiev composed his Fourth Symphony, using material from that ballet (most notably the music from the final scene, which he reworked as the symphony’s Andante tranquillo), and also a number of themes originally intended for Le Fils prodigue. To his bemusement, the work was coolly received when first performed at the Boston Symphony’s 50th Jubilee on 14 November 1930. Some 17 years later, immediately after composing his Sixth Symphony, Prokofiev substantially rewrote the work, making it a larger scale work and more clearly dramatic in its narrative thrust; in recognition of its transformation, he awarded it a new opus number.

Symphony No 6 in E flat minor Op 111
By then, Prokofiev was in a very different emotional and political environment. In 1936, Prokofiev had left Paris with his family to settle in Moscow, enticed both by the promise that he would help rebuild Soviet music after the ravages of the cultural revolution of the late 1920s, and also drawn by his longing to return to his homeland. It was not long after composing two of his most successful Soviet works, Peter and the Wolf and his ballet Romeo and Juliet, that Prokofiev was disabused of the notion that he could weather the political currents of Stalinist Russia. In the late 1930s, several of his colleagues, including a number involved in the creation of Romeo and Juliet and Peter and the Wolf, were arrested by Stalin’s state police, the NKVD. Prokofiev composed several tragic masterpieces in the wake of these arrests, notably his Violin Sonata No 1 and the so-called ‘War’ Sonatas—Piano Sonatas Nos 6, 7 and 8. Ironically, several of these were awarded Stalin Prizes (the prize committee including such astute musicians as Prokofiev’s friend Myaskovsky and Shostakovich). Perhaps emboldened by these awards, Prokofiev then committed some of his darkest and most personal inspiration into arguably his greatest symphony, No 6 (1945–47). One may suspect the influence of another Sixth Symphony, Tchaikovsky’s 'Pathétique': like that work, Prokofiev’s first subject is troubled and restless, followed by a slower second subject of such harmonic stillness that it creates a ‘haven’-like atmosphere—only in Prokofiev’s case, there is poignancy in the melody’s ‘old-fashioned’ modal tonality and the pastoral colouring afforded by oboe and cor anglais by which it is played. Prokofiev also greatly admired Tchaikovsky’s scherzo third movement—in effect a false finale whose hollowness is underlined by the tragic denouement of the finale proper; Prokofiev’s third movement, again, starts in bustling fashion as if preparing for a ‘triumphant’ peroration. However, Prokofiev instead ‘calls its bluff’ by a recollection of the pastoral theme from the first movement, which provokes two great howls from the orchestra—based on a theme heard earlier in the finale—followed by the bitterest and most baleful final cadence.

Symphony No 7 in C sharp minor Op 131
In 1948, following Prokofiev’s denunciation by Stalin’s cultural henchman Andrei Zhdanov, the Sixth Symphony was explicitly banned from performance. Prokofiev had to make amends in typical Soviet fashion by writing music for children. It was for such an audience that his final Symphony No 7 (1951–52) was officially intended, commissioned as it was by the Children’s Division of State Radio. Although ostensibly ‘conflict free’, and full of considerable charm and orchestral brilliance, there is a persistent undertone of resigned wistfulness which becomes almost heart-breaking in the slow third movement (its initial theme taken from Prokofiev’s incidental music to Pushkin’s Eugene Onegin). Furthermore, there is a sardonic theme for glockenspiel played against a ticking background, first heard in the first movement and reprised towards the end of the finale—an allusion to music associated with the Astrologer in Rimsky-Korsakov’s satirical opera The Golden Cockerel. The Astrologer is the one ‘real’ character in the absurd court of Tsar Dodon who, implicitly, outlives them and their politics.