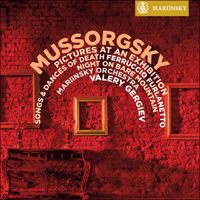 Pictures from an exhibition & other works

Valery Gergiev and the Mariinsky Orchestra celebrate Musorgsky with a new recording of two of his most cherished works, Pictures from an Exhibition and Night on Bare Mountain (performed here in Mussorgsky’s original version).

Gergiev is at his finest conducting these paragons of Musorgsky’s work, featured alongside which are the seldom heard Songs and Dances of Death, composed during the years 1875 to 1877 and left languishing unpublished during the composer’s lifetime.

'The playing here is poised, uninflated, and vividly characterised … the major appeal of this release is an exceptional interpretation of the Songs and Dances of Death by Ferrucio Furlanetto. His mellow-toned Italian bass, projected with superlative line and diction, offers a fine alternative to the heavy vocal artillery of Russian tradition … excellently clear recorded sound enhances a release of real and anti-routine quality.' (BBC Music Magazine)

'The sound is brilliantly clear. It’s one of the disc’s biggest selling points, in fact, repeatedly allowing instrumental details to shine through in an exciting way … there is something dark and blood-curdling about Furlanetto's voice that makes him perfect for this cycle … this is a thunderous, majestic performance’’ (MusicWeb International)
'Here’s something full of riches … the centrepiece is Songs and Dances of Death, sung with unsettling resonance and beauty by Ferruccio Furlanetto in the Shostakovich scoring, as chilling as a marble mausoleum … Gergiev does a great job of defamiliarising this great tone poem (Night on Bare Mountain)' (Sinfini Music)

'A particularly rich and detailed performance of Mussorgsky’s Pictures at an Exhibition, and a truly opulent Night on Bare Mountain' (Pizzicato, Luxembourg)

Pictures from an Exhibition
In July 1873, thirty-nine-year-old Viktor Hartmann, an architect and artist and a close friend of Mussorgsky’s, died suddenly. An exhibition of his works was held in February 1874. In June of the same year, Mussorgsky wrote a pianosuite in memory of Hartmann: Pictures from an exhibition. ‘The Hartmann is swirling along, just like Boris [Godunov] did: the air is thick with its sounds and its idea. I’m devouring it all, gorging on it, and I can barely get it down on paper’ (from a letter to the critic Vladimir Stasov).

The composer picked ten of Hartmann’s works and created a cycle of ten pieces of programme music, which he prefaces with the opening “Promenade” (repeated four times in different variations and binding the cycle together). A harmonious composition takes shape, bordered by the longer “Promenade” and “The great Gate of Kiev” that are ‘in the Russian spirit’ and culminating in the piece pairing “Catacombs” and “With the dead in a dead language”. It is this piece that most fully conveys the bitterness of personal loss. Furthermore, Hartmann had depicted himself in his “Paris catacombs” painting.

Besides its lively melodic and harmonic characteristics, Pictures is remarkable in offering a breadth of national colour that was unprecedented in Russian piano music, highlighting its original romantic nature. Almost all the pieces in Pictures are notable for their impressive spirit of place, for example, “The Old Castle—a landscape with a troubadour, or the garden in “Tuileries”, or “Cattle”—a Polish ox-drawn cart, not to mention the three Russian pieces, including “The hut on hen’s legs (Baba Yaga)”.

There is a truly astonishing pianism in Pictures. What is more, the music is utterly romantic; it is devoid of flashy virtuosity, or at any rate, it steers clear of any pianistic frippery. Worthy of note is the “Ballet of the Unhatched Chicks”, in which the pianist’s hands are almost slapped against the keyboard, and in particular the “Great Gate of Kiev” with its lingering chords. The eminent Russian pianist Samuel Feinberg was right to call Mussorgsky’s creation ‘an encyclopaedia of new techniques and sonic colours’.

It is this factor that is largely responsible for the problems with orchestral versions of Pictures. The most famous orchestration, and the one that has proved the most popular for performance, is the score by Maurice Ravel (1922). There are prominent contemporaries who are happy to accuse the French transcription of ‘foppery’ not consistent with the style of the original Russian. Yet once heard, how could anyone forget the saxophone in “The Old Castle”, the tuba in “Cattle”, the glissandi of the strings in “The gnome”? Who would choose other, less dressy, examples of orchestration over Ravel’s score?

We are left to ponder what Mussorgsky himself would have done—not as an orchestrator but as a creator of new piano and symphonic works, had he lived significantly longer than Hartmann and his life not ended at the age of forty-two. Doubtless the movement defined by Mussorgsky in his immortal words (and actions) as ‘To new shores!’ would have continued.

Songs and dances of death
In 1875, Mussorgsky started writing the song cycle Songs and dances of death; the composer was thirty-six years old, with six years of life remaining, and ‘She’—for this was how the composer referred to death in his letters—filled his thoughts. This theme had already appeared in Night on Bare Mountain, but in the 1870s it found new form in the idea for a long work for voice and piano based on the poems of Arseny Golenishchev-Kutuzov, with whom Mussorgsky had close artistic and personal ties. The critic Vladimir Stasov helped with the broader plan of the cycle: it was suggested to have twelve pieces showing the deaths of people of various ages and social classes, but this was whittled down to four, which together make up the greatest death poem in the Russian vocal music tradition, and not only in it alone.

‘The bumbling fool of death mows relentlessly, without stopping to think whether her accursed visit is really needed,’ Mussorgsky wrote in one of his letters, without a hint of humility. Quite the reverse, he peruses death unflinchingly, and that is what makes the Songs and dances of death cycle so penetrating and so closely connected to Russian literature (in particular Dostoevsky), where a deathly veracity is also to be found.

Songs and dances of death opens with “Lullaby”: a mother is trying to comfort her sick child, Death comes to help her, singing the soothing refrain of ‘Bayushki, bayu, bayu’. She grins tenderly and nothing is as deeply perturbing as the gentle singing of Death the Consoler. “Serenade”, the second song, is performed on behalf of Death the Beau: here everything is a mask, a deception, and only the last commanding cry of ‘You are mine!’ is true.

In “Trepak” the music and poetry move from the four walls of the home to a desolate snowswept landscape: in the forest a drunken peasant is freezing. Death twirls him in a folk dance, the trepak, which is replaced by the sweet vision of a warm summer, as happens in the final moments of those freezing to death. It is over, and only the muffled piano is left repeating the trepak rhythm.

Two years later, Mussorgsky added the final and longest piece to the cycle: “The Field Marshal”. The author inserted the horrifying direction: Vivo—alla Guerra (Lively—in a martial spirit). Th ere follows the image of a battle, then a stupor takes hold: the living are lying with the dead, and finally Field-Marshal-Death rides in on a skeleton horse. Here, Mussorgsky uses the anthem of the Polish insurgents at the time, Z dymem pożarów. This is tragic beyond belief: it is as though we are seeing Poland as it became during the Second World War, dotted with Nazi extermination camps. In a letter to Golenishtchev-Kutuzov, the composer wrote of “The Field Marshal”: ‘It is death, coldly, passionately in love with death, and delighting in death.’ And he concluded: ‘Yes, it is after war!’ Death is the victor—in the fates of individuals and the fates of warring peoples alike, and no matter what dialogue it engages in with those it encounters.

In 1962, Shostakovich orchestrated this cycle. The score contains much that is remarkable: the strings in “Lullaby”, the flute and harp in “Trepak”, the percussion in “Field Marshal”. But most important of all is that in 1969 Songs and dances of death was reborn in Shostakovich’s Fourteenth Symphony (he said that Mussorgsky should have included more pieces in the cycle). In Symphony No 14 there are eleven movements and their principal theme is death. It served as a moral cleansing for the Russian people, who had overcome the hardships of the past. These works—Mussorgsky’s song cycle and Shostakovich’s Symphony that followed in its footsteps—have come to hold great importance for Russians today, for we Russians require new eff orts to preserve our country’s humanistic traditions.

Night on Bare Mountain
In 1860, the twenty-one-year-old Mussorgsky received a commission to compose the music for a play entitled The Witches by the amateur playwright Georgiy Mengden. Here is what the libretto the composer was following looked like: ‘1. A gathering of witches, with their chattering and gossip; 2. Circling Satan; 3. The wicked adulation of Satan; and 4. The Sabbath.’ The work remained in progress for six years, culminating in the symphonic fantasy Night on Bare Mountain. There are earlier and later versions of it (four in total), but in contemporary performances the composer’s final version is the one most commonly used.

In composing Night on Bare Mountain, Mussorgsky, who did not have even the semblance of a conservatoire education, had produced what he described as his ‘first major independent work’. The key motifs in his creative life as a composer were immediately revealed: romantic fantasy in a Slavic vein and death in the sense of a key spiritual event; it was no coincidence that Mussorgsky found Liszt’s “Dance of Death” a source of inspiration in the 1860s.

Night on Bare Mountain displays an astonishing freedom of form. Several sections that accord with the contents of the libretto can be clearly discerned, but these sections are tightly conjoined and are essentially variations of one another. The composer took pride in the work as the epitome of something “Russian and indigenous”, as he wrote in a letter. A remarkable feature of the music is the cohesion between the brief, intense themes and the sheer originality of the modulations.

The composer was not wrong in sensing that this was his first major opus as “a faithful reproduction of the people’s imagination” (in his own appraisal), but the heights of artistry achieved came as a surprise even for him, and perhaps that was why he worried about the fate of this score: hence the many revisions. Mussorgsky never had the chance to hear it; the work had to wait twenty years before it was first performed (and in someone else’s redaction). Ever since, Night on Bare Mountain has been appearing on the Russian and world stage, and now the turn has come for the finest of the composer’s versions. An outstanding work has acquired the life it deserves.