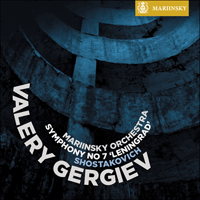 Shostakovich dedicated his Seventh Symphony to the defiance shown by the citizens of Leningrad in the face of Nazi totalitarianism. Despite the widespread reassessment that has since taken place regarding the inspirations for his symphonies, the 'Leningrad' symphony remains a highly-potent symbol for the residents of modern-day St Petersburg.

'Gergiev is more unremittingly sombre but magnificently controlled at all stages, and he draws eloquent playing from his orchestra' (Gramophone)
'Gergiev exerts a much tauter control over proceedings, the inexorable tread of the sarabande rhythm achieving mesmeric cumulative power which is helped in no small measure by the superbly responsive orchestral playing and the tremendous dynamic range of the recording' (BBC Music Magazine)

The Second World War is called the ‘Great Patriotic War’ in Russia for a reason: it has been estimated that at least twenty seven million Soviet citizens lost their lives. The hecatomb of the Great Patriotic War was the largest public sacrifice in the nation’s history. It is thus all the more surprising to encounter some of the sanguine sentiments expressed in the wartime poetry of Olga Berggolts, whose greatest work was inspired by the experience of living through the Leningrad Blockade. ‘We were so happy’, she writes, for example, in “Leningrad Diary”, a poem written during the cold months of January and February 1942 and dedicated to all those defending her city during the siege; ‘We radiated such stormy freedom, / That our grandchildren would envy us’. The fact is that during the war years, everything was simplified. Russians lived in a black and white world of ‘us’ and ‘them’ (that is, the enemy threatening the nation’s destruction). To quote the remarkable Blockade Diary written by the literary critic Lidia Ginzburg, another outstanding female survivor of the Siege of Leningrad, ‘life was cleansed of substitutes and hoaxes’. After decades of paralyzing fear, the trials of war set the people of Soviet Russia on a journey of self-discovery. It was perhaps inevitable, then, that the brilliantly gifted composer who was Dmitri Dmitrievich Shostakovich would find a way of expressing this cleansing and self-discovery in his music when he came to compose his Seventh Symphony.

Shostakovich had just turned thirty-five when the Siege of Leningrad began in September 1941, and he would reach the height of his powers during the ensuing decade. It is sufficient to name but two symphonies from this period, the Seventh (1941) and the Eighth (1943), which are his most substantial not only in terms of their length but also their spiritual breadth. There were certainly other outstanding Russian composers at this time, but the reality of war reduced many of them to a terrified silence, while others somehow could not find within themselves the motivation to engage in large-scale creative work. Drawing its themes and its power from the cataclysmic events unfolding in Russia, Shostakovich’s wartime music shines out like a beacon, while his Seventh Symphony in particular must be seen as undoubtedly the most important musical score written anywhere in the world in 1941.

The score of the Seventh Symphony was written with an extraordinary speed, which was characteristic for Shostakovich. The first three movements were written in Leningrad during the initial weeks of the blockade in September 1941, with only the composition of the last movement temporarily postponed. Immediately after finishing the symphony’s second movement, Shostakovich made a radio broadcast to the besieged residents of his native city. It was nine days since the blockade had cut off Leningrad from the rest of the country, and the composer talked about his work in order to bolster the morale of his fellow countrymen. A recording of the broadcast was preserved, and would later be regularly replayed during anniversary commemorations of the blockade after the war. The high-pitched, halting voice of Shostakovich uttering the words ‘An hour ago I finished the score of the second movement of my new symphonic work…’ still retains its capacity to thrill.

The composition of the symphony’s final movement was temporarily postponed because in October 1941 the composer and his family were evacuated to Kuibyshev (the city on the Volga river that has now reverted to its pre-revolutionary name of Samara). But once Shostakovich was settled, he lost no time in getting back to work: the Seventh Symphony was completed by the end of December. The first performance took place in Kuibyshev on 5th March 1942 under the baton of Samuil Samosud. After the harrowing experience of having his music frequently banned by the authorities, Shostakovich became extremely nervous about how his new symphony would be received, and kept repeating at rehearsals: ‘People won’t like it, they won’t like it.’ But his misgivings proved to be unfounded, and the symphony met with a tumultuous reception at its premiere.

Far from banning the Seventh Symphony, the Soviet authorities went to some trouble to ensure it was heard around the world. It is testament to the work’s importance that the microfilmed score was sent abroad via an unusual route: Kuibyshev–Teheran–Casablanca–London. Shostakovich’s biographers have sometimes dwelled on the scuffle which took place amongst conductors wanting the right to conduct the symphony’s American premiere. Predictably perhaps this was a battle won by Arturo Toscanini, and the performance he conducted with the NBC Symphony Orchestra was relayed from a radio studio on 19 July 1942 to thousands of stations in the Western world. By this time Shostakovich’s dedication ‘To the City of Leningrad’ had given rise to the symphony’s unofficial title ‘The Leningrad’, by which it continues to be popularly known. Comparatively little thought was given to the quality of the first US performance, but success was guaranteed by the authority of the distinguished conductor and his orchestra, and the significance of the event moreover clearly went beyond the boundaries of music. The score of the Seventh Symphony became a potent symbol of anti-Fascism, and its composition, dissemination and worldwide success quickly acquired legendary status. This was helped by the outstanding event of the symphony’s premiere in the still besieged city of Leningrad on 9 August 1942. Conducted by Karl Eliasberg, it was performed by the Radio Orchestra, which was the only orchestral ensemble that had not been evacuated. The orchestra’s fifteen musicians who had been able to survive in the blockaded city were augmented by musicians drafted from the front lines.

Shostakovich had initially intended for his Seventh Symphony to be a one-movement symphonic poem. In the end he opted for the traditional four-movement cycle, but with an enormous first movement: the Allegretto takes up a third of the symphony in terms of its duration. The exposition, composed in the major key, represents, as it were, life in peacetime and includes themes and musical fabric which will be developed elsewhere in the work. Then follows a lengthy episode universally referred to as the ‘invasion theme’. Heralded by a snare drum, it lasts for some 356 bars, and contains eleven variations in which the density of sound changes but the rhythm and major key remain unchanged. The latter acquires symbolic meaning: it is the ‘major key of evil’ deployed by Rimsky-Korsakov in the ‘Battle of Kerzhenets’ (from his opera The Tale of the Invisible City of Kitezh), and by nearly every other Russian composer when evoking enemy invasion. The movement culminates in the first modulation into the minor and the appearance of a theme which every listener is bound to want to call ‘the theme of resistance’. What follows is neither resistance nor victory but a 48-bar bassoon solo—this is a requiem. Although Shostakovich claimed that he badly needed words at this point, no words could intensify the extraordinary expressiveness of the music.

We could call the second movement, Moderato (poco allegretto), ‘a quiet scherzo’ in view of its muted minor colours and chamber qualities. But even this movement has its ‘invasion’: a regular rhythm suddenly appears along with a raucous clarinet solo. Obviously this is not as terrifying as the ‘invasion’ in the first movement, and it is worth pointing out that the second movement is particularly valued by those who find the music of the first movement too poster-like. The same applies to the Adagio of the third movement. It is vital to the cycle but also possesses a high independent value. The chorale in the opening and closing bars, and the broad Bach-like chord structures in the strings can be interpreted as a prayer for victory to be granted, although as far as we know Shostakovich was not a man of religious belief either then or later. But the composer wanted to find an elevated tone capable of withstanding disarray and fear. The latter do also surface in the Adagio, when a sinister tango is struck up by the winds to a syncopated accompaniment in the strings. Can we really be hearing the ‘invasion’ theme for a third time?

Writing the final fourth movement, Allegretto non troppo, presented Shostakovich with a challenge if only because of the enormous negative energy of the first movement. Rather than provide an apotheosis of victory, Shostakovich filled the final movement with new musical material, which proved to be the best solution. The austere outlines of the remarkable sarabande in the central section call to mind the image of the great city, and that does not happen frequently in the Seventh Symphony, despite its dedication. It is inevitable that we should hear reminiscences of the first movement, such as the ‘major key of evil’ (in the coda), but the anticipated return of the opening theme is long in coming. And when it does return finally, there is no feeling of triumph. The tension in the music is too great, and its major key is too strongly reminiscent of the harsh sounds of the first movement.

The responses of Shostakovich’s contemporaries to his Seventh Symphony ranged widely, from emotional shock to bewilderment, although it was usually the more sophisticated listeners who tended to experience the latter. From the beginning, though, there was also another division in the way in which people have responded to this work, and it is one which has persisted until now. Western audiences have generally taken a far more critical attitude to the Seventh Symphony than Russian ones. The ambivalence shown by Western audiences has been shared by critics and musicologists. One extreme example is the American scholar Richard Taruskin’s assertion that the Seventh Symphony ‘emerged like some sort of woolly mammoth from the Stalinist deep freeze’. For Russians, however, the Seventh Symphony is the voice of a shared history, and the supreme musical symbol of the 1940s, a decade which wreaked devastation in every family and household in the Soviet Union.

Anna Akhmatova, one of Russia’s greatest twentieth-century poets, and another survivor of the Siege of Leningrad, refers to the Seventh Symphony in the final version of her great masterpiece Poem Without a Hero: ‘And my ‘Seventh’ is with me, / Half-dead and dumb, / Its mouth is turned down and open, / Like the mouth of a tragic mask, / But smeared with black paint, and stuffed with dry earth’. Akhmatova seems to be suggesting here that the Seventh Symphony was offered as a sacrifice to official culture, so that everyone might know that the atmosphere of Soviet life in the 1940s was one of deadly threat. Her two last lines perhaps imply that the Seventh Symphony may not have fully revealed all its secrets, but when performed by inspired musicians, this is a work which surely expresses very clearly everything its composer wanted to say.