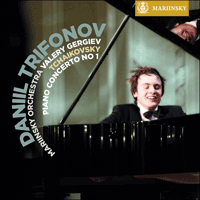 Since winning the International Tchaikovsky Competition in 2011, Daniil Trifonov has established himself as the world's most exciting young pianist. On this, his debut Mariinsky recording, he presents Tchaikovsky's Piano Concerto No 1 along with a unique selection of recital repertoire.

'Truly exciting Tchaikovsky … one of the most exhilarating recordings of the Tchaikovsky concerto I've heard in years… it could easily have been a CD Review disc of the week when it was released last year so I'm glad you've heard it this morning' (BBC Radio 3 CD Review)
'Trifonov's combination of delicacy and fire leaves an indelible impression in this debut recording with the Mariinsky. The Tchaikovsky, scorching and heart-rending but never bombastic, is paired with solo Liszt transcriptions (of Schumann and Schubert) and Chopin's Barcarolle' (The Observer)
'Trifonov may be at the start of his career but he is already a mature artist. His youth brings an overwhelming energy which seems to blow the cobwebs off everything he performs: he forces one to listen to these works anew, the sure sign of greatness' (International Record Review)
'Un grand artiste en devenir' (Diapason, France)» More

If you were to ask people in Russia, 'Who is the nation’s greatest poet?', ten out of ten would answer 'Pushkin' with absolute sincerity, and they would be right. And if you were to ask them what the most famous piece of Russian classical symphonic music was, eight out of ten would name Tchaikovsky’s Piano Concerto No 1 (if they ventured an answer at all), and this too would be completely correct.

What are the reasons for this? It would be difficult to give an exhaustive list, but some obvious ones immediately spring to mind. Tchaikovsky was a genius in terms of lyrical music, and many of his compositions are compelling in their beauty and soulfulness. He was a Russian genius; the breadth of melodic flow in his scores is remarkable. It is also worth noting that prior to Tchaikovsky nothing comparable to the First Piano Concerto had existed in the Russian musical tradition, nor was there anything like it in the rest of the world’s concert music (post-Beethoven): it was unlike Schumann’s refined chamber-like Concerto, and even less akin to the concerti of Liszt, with their theatrical pathos. No one would dispute the fact that Tchaikovsky’s piano music owes much to both Schumann and Liszt, as well as to Anton Rubinstein, yet throughout the Concerto the piano offers a heartfelt and warm pronouncement by an emphatically Russian composer.

Noteworthy too is the manner in which Tchaikovsky’s score substantially covered the 'spectrum of moods' in Russian culture at the time. It contains almost no minor tones (and perhaps for that reason the Concerto has only two ‘minor’ themes), yet there is plenty of celebratory music—for example, at the opening of the Concerto and in the final coda. This work displays neither the heavy mood characteristic of Mussorgsky, who wrote Boris Godunov not long before Tchaikovsky’s Concerto, nor the tragic motifs of Pyotr Ilyich himself that filled his earlier fantasy overture Romeo and Juliet. The score of Piano Concerto No 1 provided a counterbalance to the dark side of the Russian musical spectrum and it has earned eternal fame thanks to its captivating major keys.

Unusual aspects of a familiar work
True lovers of classical music will have listened to the first Piano Concerto dozens of times, and the pleasure they receive from it does not diminish even when the Concerto is performed many times in succession (as in the final round of the International Tchaikovsky Competition): it still has the power to enchant and stir the listener. Perhaps there is little point attempting to 'retell' such music; rather we ought to point out certain peculiarities of its form that might escape the listener’s notice, yet which lend the Concerto an element of its magnificence. For example, the opening theme is not repeated anywhere else in the Concerto, yet it is a theme of unparalleled power and beauty. The same is true of the astonishing secondary theme of the first movement, reminiscent of a lullaby; it does not appear in the recapitulation. Tchaikovsky’s melodic generosity truly knows no bounds, and the listener cannot help but delight in it. And what of the centre part of the second movement? It is none other than a paraphrase of the popular French chansonnette 'Il faut s’amuser, danser et rire' ('One must have fun, dance and laugh'). It was frequently sung in the Tchaikovsky household, and who could have thought that it would come to the aid of the composer when he needed an easy scherzo in his piano concerto? Here, as so often, the great Russian poet Anna Akhmatova’s (1889-1966) verse comes to mind: 'If you only knew from what rubbish / Poems grow, knowing no shame.'

The specifics of the Piano Concerto in question do not only relate to the concerto’s form—these features unquestionably changed the very essence of the classical genre. Tchaikovsky wrote specifically of his Piano Concerto that 'here we have two equal forces … the powerful … orchestra, with which there struggles and over which there triumphs … a small … but strong-spirited rival' (letter to Nadezhda von Meck, 24 November 1880). Yet in reality there is neither 'struggle' nor 'triumph' in the first Piano Concerto; rather there is a dialogue, surprisingly rich in emotional hues. Continuing what Tchaikovsky had begun, Rachmaninov opened up a vast field of piano concerti in which the Russian concerto stands triumphant as a harmony of personal and extra-personal spiritual forces.

And the grandiose Russian fortepiano school also emerged in Tchaikovsky’s score. We know that Pyotr Ilyich was not a professional performer, but in his first Piano Concerto, through the force of his compositional genius, he created a pianism of unrivalled diversity and brilliance. In today’s world, there are few pianists appearing in public for whom Tchaikovsky’s Piano Concerto No 1 would not be a prized addition to their repertoire, despite the fact that it poses intriguing artistic challenges.

Peculiarities and lessons
During Tchaikovsky’s lifetime, however, things were different. The thirty-four-year-old composer worked on the Concerto not without effort, and his fingers did not play all by themselves (as is the case with composers who are pianists); this turned out to be for the best—everything was brought about through conscious choice. Having finished the work, Tchaikovsky proposed to Nikolai Rubinstein that he might play it, which seemed natural enough: Rubinstein was not only a splendid pianist, but also a close friend of Tchaikovsky. Then suddenly 'the Concerto is worthless and unplayable—it is bad, vulgar, and only two or three pages are worth preserving' (Rubinstein’s reaction as relayed by Tchaikovsky in a letter to von Meck, dated 21 January 1878). Unthinkable words; and expressed in the less than desirable Russian tradition of 'calling a spade a spade'. Their relations became strained, the première of the Concerto was delayed and, moreover, Tchaikovsky found himself forced to turn to a foreign musician. That musician was Hans von Bülow, a renowned pianist, prominent conductor and generally a kind-hearted man. The first performance of the Concerto took place in Boston on 13 October 1875. And it was only after three years that Rubinstein played it, having undergone a change of heart. Here was a bitter lesson not only about intolerance, but also about responding thoughtlessly to a new work by a contemporary. After all, Rubinstein should have borne in mind that a gifted artist is always ahead of his time.

When, on 28 October 1893, Tchaikovsky appeared in public for the last time at the St Petersburg Noble Assembly, accompanying the German-American pianist Adele Aus der Ohe, who was performing as the soloist in the First Piano Concerto, he surely could not have foreseen the unimaginably glorious future that awaited his composition. He did not know that within fifty years many Hollywood movies would begin screenings to the opening bars of Piano Concerto No 1. And, of course, he could not have conceived that one renowned musician would later write in a newspaper article that Tchaikovsky was famous among the entire population of Russia, even though not everyone could name the tsar at the time. One should know both one’s own culture and one’s own history. It is necessary to value and preserve our own geniuses—our own artists—and to try to grasp the meaning of those works of art that are destined to become a symbol of their own country.