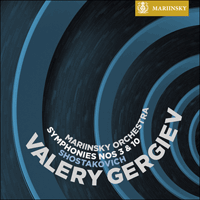 The Third Symphony was first performed in January 1930, its final movement setting a text by Semyon Isaakovich Kirsanov praising May Day and the revolution. Shostakovich stated that the work "expresses the spirit of peaceful reconstruction" and yet much of the music is dark and sombre in tone.

The Tenth Symphony is one of his most popular and frequently heard works. It was first performed in December 1953 following Stalin's death earlier that year, although Shostakovich had been working on much of the material incorporated in the symphony for many years. The great Russian soprano Galina Vishnevskaya claimed that the symphony was "a composer's testament of misery, forever damning a tyrant".

'This superbly recorded disc remains, for me at least, one of the few indispensable Shostakovich CDs of recent years' (Gramophone)
'Gergiev works wonders with the Third … wonderfully expressive woodwind playing' (BBC Music Magazine)

It waited and its turn came

His Third
Dmitry Shostakovich’s Third Symphony in no way belongs to that group of great third symphonies such as Beethoven’s Eroica, or Rachmaninov’s Third. It is an experimental score by a young composer which makes up a symmetrical pair with his Second Symphony, and together with the Second expresses the spirit of the Soviet 1920s, when the universal faith in utopia, and the utopia of free artistic creation, reached its apogee.

Its meaning
The Third Symphony was planned as a part of a large cycle of works written to celebrate revolutionary holidays—the 1st May in this case—and if in the Second (“October”) Symphony, as the composer stated, “struggle plays a self-sufficient role, then in the “May Symphony” [the Third] … the mood is of the celebration of peaceful construction”. But universal utopias had withered by the beginning of the 1930s, Shostakovich’s “calendar cycle” was broken off, and in 1936 we received from the composer the great Fourth Symphony, which conveyed the alarm and fear of the Stalinist decades and prophesied the hecatombs of the “great terror”.

Material and Form
The composer’s whimsical idea to “write a symphony in which not one theme is repeated” can be explained by his desire for innovation. Realised in the Third Symphony, this idea determined that the themes themselves would not be so memorable, but should create an intense contour of form. Musicologists tend to use the word “quasi” (“approximation”) when talking about this one-movement composition. And indeed, one can find here a quasisymphony in four traditional movements, and quasi-sonata form with three befitting sections. But essentially what we have before us is an innovative work where themes are definitely not decisive, nor is the quality of the material, rather the particularities of the way the music unfolds on the temporal level and the character of its instrumental colourings. For example, the beginning of the symphony can be perceived as a song-like prologue thanks to the clarinet playing and the gentle, “undulating” rhythm. The acceleration in tempo and energetic progression of short motifs is analogous to the Primary section in sonata form; the material presented in fugato suggests a development. At the centre of the composition is an approximation of a scherzo, whose intonations and orchestration indicate a youthful march. There are also at this point three slow episodes suggesting something comparable to the lyrical movement of the symphonic cycle, although there is definitely no expansive melody here.

The progression is astonishing in its novelty and brilliance, most notably where the unison recitative in the orchestra leads to a four-minute choral finale sung to verses by the Constructivist poet Semyon Kirsanov.

The Hypnosis of celebration
It is precisely these slightly “transrational” verses, reproduced in a dense choral texture in an unbroken major key, that glorify the 1st of May, which was almost a pagan festival in terms of its heterogeneity, and in the abundance of spectacles and undertakings. With such a variety of impressions and—we should add in connection with the Third Symphony—such robust sound material, time ceases to be felt. The philosopher Gadamer said that the “mystery of celebration consists in the immobility of time”. Here, in the symphony’s finale, we are brought into contact not with mystery but with the hypnosis of celebration, when we stop belonging to ourselves, and fully submit to the will of the human multitudes.

Parallel and continuation
The Third Symphony only has one parallel in all contemporary art, and that is the painting “Formula of Spring” (1928–29) by Pavel Filonov, a brilliant member of the Russian avant-garde; the canvas contains a great number of objects and a dense and unusual colouring, which draw us into a new reality as if through hypnosis. As far as continuation is concerned, the Third Symphony, which stands in many senses “on the edge” of his work, finds echoes in Shostakovich’s most famous scores, and above all in his Seventh Symphony. Here we are not just talking about the frontal attack of C major and E flat major, but the canonical episode of the “invasion”, which can first be found in the coda of the Third! The clarinets in the first movement of the Tenth and the rhythms of the second movement (“the 9th of January”) of the Eleventh, meanwhile—all these incidences of direct connection with the Third appear to completely ignore the fact that after the latter work’s premiere, thirty-five years passed before it was performed again in the Soviet Union. But every score of this brilliant composer has its own “biology”. Even if it was un-performable, it lived its own secret life, communicating with Shostakovich’s contemporaries in some invisible way. The Third Symphony waited its turn. Its turn finally came.

A feeling of freedom

Its exceptional quality
All of Shostakovich’s symphonies are exceptional, but the Tenth occupies an utterly special place in his symphonic macro-cycle. Before it came three wartime symphonies (including the Ninth as music of the year of victory), but the main reason is that the post-war 10th is emphatically autobiographical, and it therefore became the only work of its kind for Shostakovich, even if one takes into consideration the Fifteenth with its moods of farewell. Before the Tenth, Shostakovich had not written a symphony for eight years; it is the longest break in his symphonic cycle, and one that was replete, moreover, with the gravest collisions of a personal and creative kind—and it was only after the Tenth that everything more or less straightened out in Shostakovich’s career as a composer. Let us not forget that the symphony was completed seven months after the death of Stalin. That is when the life of the whole country and its people, practically lifeless after Stalin’s atrocities, began to straighten out.

The particularities of the symphony and the events that take place in it. The key signature of the Tenth cannot fail to draw our attention: E Minor. This is rare for Shostakovich; his other main work written in this key is his Trio, Op 67, “In Memory of Ivan Sollertinsky”. In both cases this is music with roots in something deeply personal, and the common tonal colouring here means a great deal.

The temporal qualities of the first movement are completely unusual: ¾ time and Moderato, which does not change for the duration of the entire movement. Strings in the introduction, a clarinet solo in the primary part and a waltzing flute as the secondary part transform the whole exposition into a lyrical cluster—deep and almost hidden—and marked at any rate by that quality which one prominent Russian thinker called the “shamefacedness of creation”. The introductory theme (as a leitmotif of the whole movement, and possibly the entire symphony) undergoes intense development, and it is also heard at the climax. The waltz theme becomes somehow impossibly constricted in the recapitulation: the clarinets play in thirds, in pianissimo. But the limit of expressiveness is reached in the coda, where two piccolos repeat the symphony’s first motif: it is as if voices are silenced and suffering becomes mute.

The strongest contrast comes in the second movement (the Scherzo). Here there is violence and the triumph of evil (the brass play in the major key), and in the middle section the strings have a sinuous melodic figure, which is reminiscent of everyday music of the 1940s. The leitmotif of the symphony is invisibly present almost everywhere, and there are echoes of the “Dies irae”, that musical symbol of cruelty, in the background voices.

There follows the third movement, which in the symphonic cycle is supposed to be slow, but here is so full of events and signs that the temporal flow is compressed and the tempo loses definition. The strings enter cautiously and quietly, and then suddenly there is an explosion of sound in the wind instruments, and on the crest of the phrase appears the musical monogram DEsCH (“D. Sch.”, “Dmitri Schostakovich”): it appears for the first time, and from this point on does not depart from the symphony’s score, nor from Shostakovich’s music in general. It is a truly cataclysmic moment, but the subject is not brought to a conclusion here: in the next episode a solo French horn plays the theme of E-A-E-D-A. The theme (with the same notes) is repeated 12 times and calls out to be decoded. The solution to the mystery was not found during the composer’s lifetime, and only fourteen years ago did the Azerbaijani pianist and composer Elmira Nazirova allow the publication of the letters Shostakovich sent her in 1953, which reveal the meaning of the French horn theme: it is the name “Elmira”, encoded in musical notes (E-A-E-D-A is otherwise musically spelled as E-La-Mi-Re-A). Shostakovich had done for the first and last time what dozens of great Romantic composers had done before him, when they addressed those whom they loved in their music.

In the slow introduction to the finale (the absence of a slow movement in the cycle is thus compensated for), there is a motif with an “eastern” tinge—suggesting the young heroine of the third movement has not been forgotten – followed by fast music, which would look normal for Shostakovich (bearing in mind the dance theme with the Jewish flavour), if at the climax the theme D-Es-C-H (triple forte!) did not appear in orchestral unison. The astonishing gesture of self-affirmation has been made by the composer, which for us opens up a new spiritual horizon: we are no longer enslaved, “the blue sky of violence” (a Taoist metaphor) breaks apart above us and we sense contact with goodness. And although the music hurries away in the coda of the finale, and although “shamefacedness” takes its toll, both the meaning and purpose of the Tenth symphony have been achieved.

The 17th
People from the post-war generation (including the present author) felt this on 17th December 1953 in the Great Hall of the Leningrad Philharmonia, when the Leningrad Philharmonic Orchestra conducted by Evgeny Mravinsky performed the Tenth for the first time. Memories of this event do not fade. For the symphony told its audience that night that the feeling of personal freedom is the summit of human existence, however difficult the ascent. And today, there can hardly be a shadow of a doubt about that.