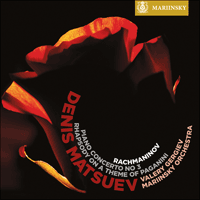 The Mariinsky label’s fourth release features acclaimed Russian pianist Denis Matsuev alongside Valery Gergiev and the Mariinsky Orchestra for recordings of Rachmaninov’s Piano Concerto No 3 and his Rhapsody on a Theme of Paganini.

Since winning the 11th International Tchaikovsky Competition in 1998 Matsuev has established a reputation as one of Russia’s greatest and most dynamic pianists. Over recent years he has begun to perform regularly on the international scene and has recorded for BMG Russia. He has appeared with many of the world’s leading orchestras and gave his first Carnegie Hall recital in 2007.

Matsuev is renowned for his interpretations of music by Russian composers and has collaborated with the Serge Rachmaninoff Foundation. He was chosen by the Foundation to perform and record unknown pieces of Rachmaninov on the composer’s own piano at the Rachmaninov house on the Villa Senar estate, Lucerne.

'Here, for once, is the level of artistry that the work needs. Denis Matsuev's phenomenal deftness is such that he can launch into the finale at an eyebrow-raising speed which he then has no trouble sustaining. And for all his seemingly endless reserves of technical power, he never makes an ugly sound … The Paganini Rhapsody is another memorable experience, with Matsuev and Gergiev darting unerringly between the music's extremes of fantastical virtuosity and tight-reined lyricism' (BBC Music Magazine)
'As one might expect from someone hailed as Horowitz's successor, Matsuev holds that most titanic of piano concertos in a passionate embrace' (The Sunday Times)» More
'What a pianist! Denis Matsuev is a phenomenon. Here he proves that he can associated his virtuosity with a real sense of style and aesthetic' (Classics Today)

Third Piano Concerto—A Very Russian Journey
Rachmaninov wrote his Third Piano Concerto, Op 30, in 1909. By this date the 36-year old composer had written the most important two thirds of what would be his entire output: three operas and two symphonies, outstanding in their artistry and creativity. The Third Piano Concerto was conceived at this ‘golden mean’ in his creative life. This is not just a mathematical notion: I believe that the score is the most perfect reflection of Rachmaninov as artist and man. It is the embodiment of his contribution to the history of the new music. Rachmaninov was of course a genius, both as composer and pianist, but it was the piano concerto that was to be the synthesis and symbol of his musical gift, and the Third Piano Concerto indisputably represents the peak of his genius.

Chronologically the Third Piano Concerto belongs to the period described in Russia as the Silver Age. However, as a counterbalance to the centrifugal tendencies of this artistic period, the main creative thrust in Rachmaninov’s work is centripetal and the centre is in fact the Russian person, with all the spiritual and emotional attributes and intrinsic elements of that symbolic person. In the Third Piano Concerto, national traits are enveloped in a European virtuoso style but this style is interpreted in a more Russian way which is particularly effective. When we combine this with the deep personal nature of his musical expression, we can see that this work reflects not simply the power of the Russian style but also the lyricism of personal emotion.

First movement, Allegro ma non tanto
Here, as throughout the entire concerto, the D minor key reflects Rachmaninov’s deepseated and enduring response to his experience of life; we are reminded that, for the composer, this key is a focus for mournful reflection. (The First Symphony, the First Piano Sonata and the later Variations on a Theme by Corelli are all written in D minor.) The main theme emerges from silence. At its heart is the Russian liturgical chant, Thy tomb, O Saviour, soldiers guarding. There is nothing like this device in the world concert repertoire—a huge composition beginning with a song played softly, with the piano melody calmly moving up and down, in unison across the octave. The melody winds on, like a rural Russian road, and a certain nostalgia, perhaps for Russia, takes hold of the listeners, whether they know Russia or not.

There is then a very expressive dialogue with the orchestra, but Rachmaninov clearly gives the piano the most important thematic material, apart from the theme of the second movement. The soloist plays almost continuously and this gives the Concerto its ‘first person’ feel, a monologue which is unique in instrumental music and which, I am convinced, could only be produced by a Russian composer, for the expression of the personal and confessional is nowhere valued and appreciated so much as in Russia.

The symphonic development of the material (in two waves) is entrusted to the piano, while the solo cadenza is given the composer’s signature device, the sound of bells, which can be reproduced on the piano with such stunning brilliance. There is virtually no reprise at the end of the first movement but there is a departure (the coda) where the music dies away, dissolving in silence, and we come to understand and experience the feeling that the dignified and ancient art of dying, Ars moriendi, has never, since Tchaikovsky, been so nobly expressed in Russian music as it is now by Rachmaninov.

Second movement, Intermezzo
The intermezzo opens with the slow and stately orchestral theme but then yields it to the piano which plays it through many changes and variations, as though improvising in the patterned manner of romantic pianism. It is only at the end of the movement, in the galloping of the scherzo (like the Andantino in Tchaikovsky’s First Concerto), that the piano falls back into an accompanying role. Together, these conjure up a strange vision from the past, with the clarinet and bassoon taking up the Concerto’s opening theme, played piano, dolce.

Third movement, Finale
With the Finale there is, as usual, an emotional shift, and the deep-rooted aspects of Rachmaninov’s style move with it. All the themes are expressed through ascending motifs and the piano is given percussion qualities. Rachmaninov had never produced such a huge upswell of emotion as in the second theme and particularly in the third theme in major key. Sensual energy, always present in his music though usually implicit and subliminal, here reaches an unimaginable concentration. There should be a climax but Rachmaninov delays it, the development is interrupted with a mocking, if not menacing Scherzando where the solo instrument, singing and grimacing, displays the richness of its character. And once more an upswell of emotion, a marching movement, and at last the climax, sounding like a peal of bells, its effect cleansing. I have never encountered an audience that did not respond to this music without unanimous exaltation, no matter who was performing it.

In dedicating the concerto to Józef Hofmann as the best contemporary pianist in the world, Rachmaninov gave a magnificent gift to all pianists. There has never been such an enthralling and responsive solo score for the pianist. And there has never been such a journey, from silence to the bell climax—a very Russian journey embodied in an instrumental composition. I believe that it is the silence that we experience most of all in Rachmaninov’s Third Piano Concerto, and because of the silence we exult in the finale, our inner selves filled with the echoes of the first movement.

Rhapsody on a Theme of Paganini—Exact and exacting
The Rhapsody on a Theme of Paganini, Op 43, written in 1934, is a special world of sound. Created during the composer’s emigration years, it is one of the six works known as ‘late Rachmaninov’. While many of his creative characteristics remained the same (and the integrity of the composer’s style never fails to amaze), the changes that did evolve affect us deeply and can be explained by dramatic changes in Rachmaninov’s life and by events in his country.

We have no exact record of the initial impetus for the Rhapsody but we can assume that the stories about Paganini as an agent of the devil and the appeal of the theme of the twenty-fourth Caprice as a symbol of fantastic virtuosity (Liszt, Brahms and even Paganini wrote variations on this theme) had an impact on Rachmaninov at a time when his usual lyrical subjects had relaxed their hold on him and a darker consciousness was taking control. Too much water had flowed under the bridge; too much had been destroyed in his own life and surroundings.

We can only wonder at the 61-year old composer’s creative energy. To be able to produce a twenty-five-minute composition, uncoiling like a spring or released like an arrow, without faltering and with no empty passages, Rachmaninov needed to be able to combat the gravitational inertia of his existence in the 1930s and to have retained a longing, a deep inner need to compose (as described in his biographies).

The structure of the Rhapsody is exact. The twenty four variations form a three-part composition. Ten two-beat variations make up the first part and they presumably portray the hostile force of the virtuoso violin (the treble clef used for the piano score in the first five variations is termed ‘violin’ clef in Russian). The theme of the Dies Irae medieval chant occurs in the seventh variation. It is just as simple as Paganini’s and just as full of symbolism. It haunted Rachmaninov the composer for many years, from the First Symphony, as a symbol of inescapable fate and mortality.

The three-beat linking section (cadenza) and the six variations that follow form the middle part of the Rhapsody. The eighteenth variation is the culmination, almost an exact inversion of the theme and written in major key. Tonal colours lighten and in the variation we catch an echo of an earlier Rachmaninov and a return to his ornate piano style and sparkling occasional major keys. Then we come to the last five variations: the finale. Again we meet unceasing movement, and again we hear the Dies Irae. This time the theme epitomises Victory and by the end it has virtually beaten Paganini’s theme from the field of sound (there is almost a mocking sneer as theme refers back to itself in the last two bars).

The piano score of the Rhapsody is unusual. The opening and ending are transparent. Percussiveness and sharp phrases predominate, there is almost no melodiousness. Mesmerising and terrifying, devilish fingers seem to race across the keyboard. The middle part is softer, the sensual charm of the instrumental music is restored (as in the eighteenth variation) and this is particularly attractive, framed by the dry and caustic nuancing of the first and third parts.

Is this really Rachmaninov? Yes—in his late period, it is. Percussive, marching, spare. This is Rachmaninov in 1934. His journey onward from the Third Piano Concerto had taken in the Fourth Concerto with its infernal finale. Still to come was the Third Symphony and the Symphonic Dances with their resounding tragic tones and the direct clash between the past and the future. But Rachmaninov would no longer be writing scores for the piano and orchestra. The Rhapsody, in all its disquieting splendour, remains his last work in this genre. Pianists love this piece, for it is a real masterpiece, even if lacking some of Rachmaninov’s early warmth. A pianist needs spiritual stamina to communicate with the Rhapsody. But then, the later works of the great masters, composed in their sunset years, are always exacting and we must give them what they require from us.