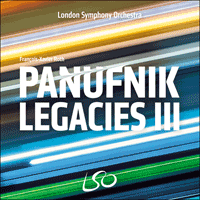 This album contains premiere recordings of works by twelve of the most exciting young composers working in the UK today and has been generously supported by The Boltini Trust. Each work is the fruit of the LSO Panufnik Composers Scheme, offering six composers each year the opportunity to write for a world-class symphony orchestra. The scheme is generously supported by The Helen Hamlyn Trust.

LSO Discovery
Founded in 1990, LSO Discovery is recognised as one of the world’s leading music education and community programmes. It reaches 60,000 people a year, of all ages, backgrounds, and levels of experience, and brings the London Symphony Orchestra into creative contact with a wider public.

In a programme with LSO musicians and orchestral music at its heart, LSO Discovery aims to offer inspirational, participatory and inclusive musical experiences to the widest possible range of people, regardless of prior experience or knowledge of classical music and musicians. It also provides support and training for emerging young instrumentalists and composers, and gives insight into music for members of the public who would like to know more. LSO Discovery’s work is captured and disseminated digitally, enabling music lovers, learners and teachers worldwide to engage with the Orchestra through video masterclasses, live-streamed events and the award-winning interactive application LSO Play.

Ongoing flagship projects include LSO On Track, the hugely successful programme for young instrumentalists across East London; LSO Sing, a choral initiative encompassing the Discovery Choirs for children and young people, the LSO Community Choir and the London Symphony Chorus with its Director Simon Halsey; projects in health and community settings; and regular Schools and Family concerts at the Barbican Centre. For advanced instrumentalists the String Experience and Guildhall School Masters in Orchestral Artistry offer unparalleled training opportunities side-by-side with LSO musicians.

St Luke’s is also the home of LSO Soundhub, a composer-led resource which responds directly to the needs of those using it: a supportive framework for artists to try out new ideas, develop work, benefit from peer-to-peer networking and access to vital resources, as well as support from industry professionals and LSO members and staff.

LSO Discovery has commissioned over 200 works from composers on the Soundhub, Panufnik and Jerwood Composer+ schemes since 2005.

To find out more visit: lso.co.uk/lso-discovery

Panufnik Composers Scheme
Each year since 2006, following on from an earlier pilot project, six composers have been chosen from a long list of applicants to the LSO Panufnik Composers Scheme. Their task is to write an orchestral piece of approximately three minutes’ duration to be workshopped by the LSO in a dedicated session. Throughout the year they are mentored by Christian Mason and myself, and have contact with the orchestra and with individual players, as well as being invited to attend both rehearsals and concerts. A real relationship develops, which continues beyond the scheme itself, so that we feel that an extensive ‘Panufnik family’ has been established.

With the remarkably generous backing of the Helen Hamlyn Trust and the patronage of Camilla Panufnik, whose active participation has been an essential part and after whose husband (the composer Andrzej Panufnik) the project is named, the scheme has grown ever stronger as it has developed. The indispensable contribution of the wonderful François-Xavier Roth has been central to its success from the outset. Including further specific LSO commissions, nearly 100 composers have had the exceptional opportunity of working with one of the world’s great orchestras over the past 14 years: an achievement to be inordinately proud of, and one that sets an example for others to follow.

This third recording of music by composers who have taken part in the scheme includes works written for the annual composers’ workshops over the past several years, as well as a number of pieces from the earlier years of the scheme, thus achieving a wide stylistic perspective. In addition we have continued to include the pieces subsequently commissioned by the LSO from Panufnik composers to be part of the orchestra’s main season (now a regular part of the scheme). The result is a tribute both to the composers involved and to the remarkable faith that the LSO has shown in the Panufnik Scheme.
Colin Matthews

Fairtrade?
The global rise in demand for cheap clothing comes at a high cost: many millions of young people are impeded from receiving formal education, suffer abuse, and in some cases incur fatal injuries. This multi-billion pound industry continues to grow and is both of great interest and concern to me. In response to it, I have chosen to explore some of the basic manufacturing processes involved in this system and interpret them musically through repetitive pounding rhythms and soaring melodies. I hope the piece will encourage us to consider our economic choices and the cost of our convenience at others’ expense.
Ayanna Witter-Johnson

Frail skies
Frail skies takes inspiration from the volatile and fragile weather patterns of the sky. A vast, empty registral space opens: a single stratospheric cello floats above subterranean bass mutterings. Clouds of woodwind gather and disperse. An outburst of bright pizzicato pierces the gloom. Then, as the shrieking high strings and winds accumulate to fill the troposphere, the undulating melodies of the brass surge, and the tempest thunders in a clatter of percussion. Warm harmonies briefly shine through, and shifting textures drift by—but the calm never lasts, and dense storms of chromatic counterpoint are always threatening.
Ewan Campbell

A dancing place 'Scherzo'
A dancing place comes from the meaning of 'orchestra' in Ancient Greek theatre. This scherzo plays with Classical concepts of democracy and comedy. It is inspired by a Marx Brothers sketch in which the conductor taps the music stand and the players tap their stands in response, undermining authority. There are chaotic moments in this piece that are subject to chance according to the society of the orchestra that plays it. These are marked with brackets detailing which group, women or men, is allowed to play. The orchestration you hear now is specific to this recording, and those individuals performing.
Cevanne Horrocks-Hopayian

In this valley of dying stars
In this valley of dying stars is a piece about stars that seem to lose their light at a glance, but still sing and make harmonies in the total darkness. The melodic mixtures of high woodwinds and string harmonics (representing the song of stars) from the beginning of the work are a core in this piece. They derive from the same pitch cell and dominate the whole piece. Throughout the work, the original melody continuously metamorphoses: it becomes a trumpet melody line in the fast sections, and turns into an intense polyphonic conversation between strings and woodwinds. The harmonic structure of this piece is also derived from the melodic lines.
Donghoon Shin

Bone Palace ballet
While writing Bone Palace ballet, I was preoccupied with questions around how and why we document human experience. The title is borrowed from Charles Bukowski, whose eponymous poem seeks to make sense of 'this dusty dream'. In the piece itself I allude to one of the earliest recordings of music known to exist—a performance of Handel’s Israel in Egypt featuring an orchestra of 500 musicians and a 4,000-strong choir, captured on wax cylinder inside Crystal Palace in 1888. The music is buried deep underneath considerable surface noise, giving the recording a ghostly quality I find exquisitely poetic.
Alex Roth

But today we collect ads
The title is a quotation from artists/architects Peter and Alison Smithson regarding their 1953 Parallel of Life and Art exhibition, a disparate array of quasi-random objects and images presented without written explanation:

Gropius wrote a book on grain silos,
Le Corbusier one on aeroplanes,
And Charlotte Perriand brought a new object to the office every morning;
But today we collect ads.

But today we collect ads is cast in seven tiny vignettes. How these episodes are connected is sometimes enigmatic, but each somehow refers to the material of another, twisted or distorted like a conversation misheard.
Matthew Sergeant

Revealing
‘Fragile, yet determined’: the first words in Giguère’s score tell us much about what the work has in store. This is music about exposure and disclosure, of layers being gradually stripped away and of the determination and confidence that this process demands. ‘The piece is not about 'revealing' in the most basic sense’, says Giguère, ‘but about 'revealing' in a more personal, intimate sense.’ In other words, what is unravelled within Revealing is not the musical material but Giguère himself.

Ojos del cielo
Ojos del cielo ('Sky eyes')—'the eyes of a person who is absent or no longer here'. A background melody is repressed and rendered ‘numb’ by its mechanised dissection in the foreground as well as the abrupt choking of its persistent attempts to ‘break free’. In addition, the potential power of the symphony orchestra is denied by an overall throttling of natural resonance.
Sasha Siem

Scoot
Scoot was inspired by the LSO’s versatile clarinet section who, Bethan says, 'have always brought a smile to my face'. It centres on short rising motifs, underpinned by mechanically clacking and chiming percussion and celesta to keep the music grounded. A climax after about two minutes or so changes the mood completely, however, and the rising motifs—which until now had sounded light and innocent—take on a more yearning feel, as though searching for something to complete them. Short but energetic, this piece is packed with incident and humour, including a very brief comic turn for the bassoons and a pair of false endings. Beware!
Tim Rutherford Johnson

Ebbing tides
The title Ebbing tides refers to the gently breathing motif (presented at the opening of the piece), which features prominently. I was inspired by waves advancing and receding when touching the shore line. The gentle, yet unpredictable, rhythm of the tide was something I was keen to encapsulate in the music. Furthermore, the mesmeric nature of such natural phenomena informed the harmony of the piece. Priority, both in terms of register and timbre, is given to intervals that I believe possess this transfixing quality (e.g. augmented triads, minor 6ths and 7ths) throughout Ebbing tides.
Michael Taplin

Desires
The reconciling of opposites has long been a preoccupation for composers, but in Desires Ashby explores one of the most fundamental juxtapositions within human nature. It is, he says, a ‘deeply personal work’, one that delves into instinctive, abstract ideas in a truly visceral way. At odds here are ‘the desires of the flesh’ and the ‘desires of the spirit’, which push and pull against each other in a struggle for reconciliation.

Brixton briefcase
'Brixton briefcase' is a slang term for a large, portable cassette player. Popular in the 1980s, these ‘briefcases’ were often carried on a person’s shoulder as they walked around urban areas, with dance music played at loud volume. Brixton briefcase is based on a tone-row lifted from an R&B song, which, focusing on the percussive and rhythmic qualities of the orchestra, develops into a dance-inspired piece.
Joanna Lee