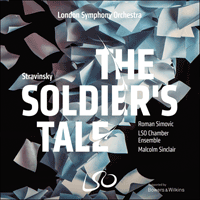 ‘Given its rhythmic complexity, performing the work without a conductor can be tricky, but the ensemble is superbly taut here, exacting yet fierce in its precision and clarity. None of the players attempts to hog the limelight and their bravura solos, all impeccably done, are seamlessly integrated into the whole … it all adds up to a wholly admirable interpretation, serious, hard-hitting and provocative’ (Gramophone)

In 1918, some five years after having gained notoriety with his ballet The Rite of Spring, Stravinsky composed a very different yet almost equally seminal work, The soldier’s tale (L'histoire du soldat). Unlike the grandiose orchestral forces required for his earlier revolutionary ballet, the new work was intended for a small group of musicians accompanying a story 'to be read, played and danced' by a few performers. To a large degree the restricted resources were imposed by the economic stringencies of post-First World War Europe, made all the more acute in Stravinsky’s case by the October Revolution and his subsequent loss of what means he had in Russia. Yet those restrictions inspired one of the most inventive and evocative suite of pieces for chamber ensemble ever composed.

His collaborator was the Swiss writer and poet Charles-Ferdinand Ramuz, a close friend Stravinsky had made in 1915 shortly after moving his family to Morges by Lake Geneva. Introduced by the conductor Ernest Ansermet, Ramuz and Stravinsky were soon virtually in constant touch; even before The soldier’s tale Ramuz helped prepare the French libretto for Stravinsky’s opera-ballet Renard, as well as translations of several Russian folk texts Stravinsky set in Berceuses du chat and Pribaoutki. It was, it seems, Ramuz’s idea to create a touring semi-dramatic work 'for only a few instruments and only two or three characters', able to be staged on a trestle stage to enable performances even in villages without a theatre, as a relatively lucrative yet inexpensive way of solving their impecunious state. Stravinsky sourced a Russian folk tale, ‘The deserter and the Devil’, from Alexander Afanasiev’s celebrated anthology: this tells of a soldier, returning home on leave, being waylaid by a devil who persuades him to trade his violin for a magic book which promises to provide material wealth. Ramuz instantly recognised the symbolic (not to mention the musical) potential of the Soldier’s violin, and in creating his performing version of this tale (which he ‘universalised’ by relocating the action in the local Vaudois region) he gave the violin an even more central role: whereas in the Afanasiev version the violin was merely the soldier’s incidental means of entertainment, replaced by purchasing another when he loses his first fiddle to the Devil, in Ramuz’s retelling it becomes the violin, which the soldier wins back from the Devil by playing cards, then plays to cure the Princess. Significantly, the soldier’s fortunes collapse each time the violin falls into the Devil’s clutches, and recover when he claims back his instrument: in short, the violin represents the soldier’s soul (as confirmed by Stravinsky himself), so emphasising the Faustian quality of his pact with the Devil.

The strikingly earthy music Stravinsky created for the soldier’s violin playing was—the renowned scholar of Russian music, Richard Taruskin, has argued—inspired quite appropriately by gypsy verbunkos-style fiddlers, as traditionally used by Austro-Hungarian recruiting parties to entice young men to join the army. Just as appropriately in a story about an ordinary soldier, Stravinsky included cornet, trombone and drums to accompany the several marches. Just as naturally, too, one may hear the influence of popular music of the time—though here we encounter something of a chicken-and-egg question: how much was The soldier’s tale inspired by jazz, and/or how much did it fortuitously tap into a number of seminal influences which subsequently defined the sound of jazz? Stravinsky later claimed that 'my knowledge of jazz was derived exclusively from copies of sheet music [provided by Ansermet], and—I had never actually heard any of the music performed': yet he was certainly acquainted with ragtime and its various imitations being performed in the American bars of Paris and the music halls which he enjoyed visiting. Though equally, as Taruskin plausibly speculates, Stravinsky may also have recalled his times in the Ukrainian town of Ustilug, his regular summer retreat before the First World War, where he composed several of his earlier works, and where he would have heard the itinerant klezmer bands—typically made up of violin, double bass, clarinet and drums, with perhaps a brass instrument or two.

Whatever the provenance, Stravinsky’s ultimate choice of instrumental line-up echoes to a remarkable degree what is now known as Dixieland (that is, early ‘authentic’) jazz, with its prominent parts for cornet, trombone, clarinet, bass and what is effectively a single percussionist with a drum kit. The ‘interlopers’ are the violin—wholly justified as the hero’s instrument—and the bassoon, added according to Stravinsky’s curious insistence that the ensemble should be made up of complementary treble and bass instruments, the bassoon therefore paired with the clarinet. (Stravinsky later admitted he was also inspired by 'a tiny ‘bullfight’ band' he had witnessed in Seville during Holy Week, which consisted 'of a cornet, a trombone, and a bassoon'.) Yet the bassoon adds a distinctively pastoral colour that’s particularly evocative and appropriate in the melancholic ‘Pastorale’, played when the soldier realises the devil has stolen three years from his life, therefore losing his dream of married life with his sweetheart.

For all Stravinsky’s remarkable genius in writing for this apparently jazz-style dance band, the number of highly skilled instrumentalists involved—seven in all, requiring in addition a conductor—was greater than Ramuz had envisaged, and reflected Stravinsky’s own lack of experience in creating an inexpensive work for touring. His demand for so many musicians largely followed from his refusal to consider using a pianist (itself a key point in Taruskin’s argument against Stravinsky’s ensemble being jazz-inspired), claiming that with so few musicians the score would appear 'like an arrangement for the piano, and that would have given evidence of a certain lack of financial means'. Ramuz, equally, appears to have been naïve about the sheer cost and amount of administration involved in putting together such a show: actors had to be auditioned and rehearsed, and scenery and costumes commissioned.

With all the expense involved in preparing the show and recruiting musicians of sufficient calibre, Stravinsky and Ramuz finally abandoned their cherished idea of using a trestle stage, instead needing to sell large numbers of seats at high prices in order to recuperate their costs. Their plan therefore changed to touring in theatres in Lausanne, Winterthur, Zurich, Geneva, and other major cities and centres. The premiere was held at the Théâtre Municipal in Lausanne on 28 September 1918, conducted by Ernest Ansermet. Fears that they might fail to sell sufficient seats were only overcome when Stravinsky approached the grand duchess Helen, the former-Tsar’s cousin now living in exile in Ouchy; he persuaded her to attend—with the result that the local Russian emigrés and the diplomatic corps in Berne all flocked to the performance. However, the planned tour was brought to a halt by the outbreak of Spanish influenza; mercifully Ramuz, Ansermet and Stravinsky were merely confined to bed, but the rest of the population of Switzerland and indeed the entire world was decimated.

For all the disappointment which attended the fulfilment of Ramuz and Stravinsky’s greatest project, it had been a happy collaboration for both men. Stravinsky in his autobiography recalled that it 'was the more precious to me because our friendship, growing closer and closer, helped me to bear the difficult times through which I was living'. The result, notwithstanding its distinct break from the Romantic tradition and its consciously ‘rustic’ style, is one of Stravinsky’s most emotionally candid scores—certainly one of the most exuberant and brilliantly written for its given instrumentation, as was appreciated by the musicians who gave the premiere of the Suite, held in London’s Wigmore Hall on 20 July 1920, once again conducted by Ansermet. Indeed, it was this premiere which appears to have truly launched The soldier’s tale to a wider audience and which has paved the way to a wider appreciation of this unique and unusual ‘story’ as originally envisaged by Ramuz and Stravinsky.