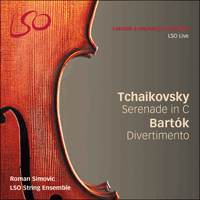 Led from the violin by brilliant virtuoso and LSO leader Roman Simović, the LSO String Ensemble offers its first recording of Tchaikovsky's graceful Serenade and the lively Bartók Divertimento.

'‘The variety and subtlety of the textures make demands not only on performers but on the recording process, and all is well managed here. Simović sets the Serenade off in stately, ceremonial style, drawing great warmth and depth of tone from the orchestra' (Gramophone)
'The bracing folk-music rhythms of Bartók’s Divertimento respond particularly well to Simović's affectionate approach … Simović focuses on its lyricism, culminating in a joyous finale' (BBC Music Magazine)» More

Pyotr Ilyich Tchaikovsky (1840–1893)
Born in Kamsko-Votkinsk in the Vyatka province of Russia on 7 May 1840, Tchaikovsky’s father was a mining engineer, his mother of French extraction. He began to study the piano at five, benefiting also from the musical instruction of his elder brother’s French governess. In 1848 the family moved to the imperial capital, St Petersburg, where Pyotr was enrolled at the School of Jurisprudence. He overcame his grief at his mother’s death in 1854 by composing and performing, although music was to remain a diversion from his job—as a clerk at the Ministry of Justice—until he enrolled as a full-time student at the St Petersburg Conservatory in 1863. His First Symphony was warmly received at its St Petersburg premiere in 1868 and he completed an opera on a melodrama by Ostrovsky, which he later destroyed. Swan Lake, the first of Tchaikovsky’s three great ballet scores, was written in 1876 for Moscow’s Bolshoi Theatre. Between 1869 and the year of his death Tchaikovsky composed over 100 songs, cast mainly in the impassioned Romance style and textually preoccupied with the frustration and despair associated with love—conditions that characterized his personal relationships.

Tchaikovsky’s hasty decision to marry an almost unknown admirer in 1877 proved a disaster, his homosexuality combining strongly with his sense of entrapment. By now he had completed his Fourth Symphony, was about to finish his opera Eugene Onegin, and had attracted the considerable financial and moral support of Nadezhda von Meck, an affluent widow. She helped him through his personal crisis and in 1878 he returned to composition with the Violin Concerto, although his work remained inhibited until the completion in 1885 of the Byron-inspired 'Manfred' Symphony. Tchaikovsky claimed that his Sixth Symphony represented his best work; the mood of crushing despair heard in all but the work’s third movement reflected the composer’s troubled state of mind. He committed suicide nine days after its premiere on 6 November 1893.

Serenade for strings in C major Op 48 (1880)
Tchaikovsky composed his Serenade in the autumn of 1880, at the same time as the ‘1812’ Overture. After several years spent travelling in Europe in the aftermath of his disastrous marriage, he had finally returned to Russia. His mind was very much on a successor to the Fourth Symphony, but the work that emerged in November was scored for strings only. The Serenade—which was dedicated to Karl Albrecht, a cellist and fellow professor of Tchaikovsky’s at the Moscow Conservatory—was first played at a private concert there on 3 December 1880. Its public premiere took place on 30 October 1881 in St Petersburg at a concert sponsored by the Russian Musical Society, conducted by Eduard Nápravník, and it was repeated in Moscow in January the following year.

The Serenade has proved to be one of Tchaikovsky’s most enduringly popular works. It opens with a movement ‘in sonatina form’—i.e. without a development section. A slow introduction returns at the end. Then comes a waltz, one of Tchaikovsky’s favourite dance forms, whose opening theme is cunningly transposed and recast to form the opening theme of the slow third movement, an Elegy. The finale is sub-titled ‘Russian theme’. This theme, which appears after a quiet, slow introduction, turns out to be a transformation of the opening theme of the first movement, which then returns in its original, slow form in the coda to the whole work.

Béla Bartók (1881–1945)
Born in 1881 in Hungary, Bartók began piano lessons with his mother at the age of five. He studied piano and composition at the Royal Academy of Music in Budapest, where he created a number of works that echoed the style of Brahms and Richard Strauss. After graduating, he discovered Austro-Hungarian and Slavic folk music, travelling extensively with his friend Zoltán Kodály and recording countless ethnic songs and dances which began to influence his own compositions. Kodály also introduced him to the works of Debussy in 1907, the year in which he became Professor of Piano at the Budapest Conservatory.

Bartók established his mature style with such scores as the ballet The Miraculous Mandarin and his opera Bluebeard’s Castle. He revived his career as a concert pianist in 1927 when he gave the première of his First Piano Concerto in Mannheim.

Bartók detested the rise of Fascism and in October 1940 he quit Budapest and travelled to the USA. At first he concentrated on ethno-musicological researches, but eventually returned to composition and created a significant group of ‘American’ works, including the Concerto for Orchestra and his Third Piano Concerto.

His character was distinguished by a firm, almost stubborn refusal to compromise or be diverted from his musical instincts by money or position. Throughout his working life, Bartók collected, transcribed and annotated the folk-songs of many countries, a commitment that brought little financial return or recognition but one which he regarded as his most important contribution to music.

Divertimento Sz113 (1939)
Bartók’s Divertimento was one of the last works he wrote before leaving Europe for exile in the US. Like the Music for strings, percussion and celeste, it was written for the influential Swiss conductor and patron of contemporary music Paul Sacher, and his Basle Chamber Orchestra. The list of Sacher’s commissions, apart from Bartók’s pieces, eventually included Strauss’ Metamorphosen and Stravinsky’s Concerto in D major, alongside works by Honegger, Henze, Malipiero, Britten, and Tippett, among others.

Bartók had become a vigorous and vocal opponent of Fascism during the 1930s, and by 1938 he was seriously considering emigration. But he had a frail, elderly mother to look after in Budapest and he was clearly torn between his desire to ‘stay at home and help matters as much as possible’, and his fear that by staying on, he would be perceived as tacitly condoning Nazi cultural and social policies. Then, in November 1938, he received Sacher’s commission, together with the generous offer of the loan of a chalet in the Swiss mountains, where he could compose in peace. After a frenetic round of international concert tours and folk-music collecting in the first half of 1939, Bartók finally accepted Sacher’s invitation. He spent about a month in Switzerland, feeling like ‘a musician of olden times, the invited guest of a patron of the arts’. In mid-August he reported to his family in Budapest that work on the new Divertimento had gone well, and he had finished the piece in just 15 days. Such was his intense concentration that when Sacher went to tell him of the outbreak of war, he found Bartók so utterly absorbed in his work that he was unaware of the momentous political upheaval that would affect his life so dramatically. After the Divertimento’s premiere in Basle on 11 June 1940, a critic wrote: ‘Thinking back to the concert, it now seems unreal and ghostly. Will the creative forces that stirred here be able to survive against the raging forces of annihilation, the violence that leads to total extermination of life?’ Within four months, Bartók had left Europe for the safety of the US. He never returned.

For a piece written in such troubled times, the Divertimento at first seems unusually buoyant and light-hearted. Bartók announced that he was thinking of ‘some kind of concerto grosso’, and the scoring pits a solo string quartet against the broad mass of strings, rather in the 18th-century manner. But there the resemblance ends. The Divertimento is a highly original work in his own unique idiom, and is in no sense a neo-classical pastiche. The first movement is a sonata-form structure in light, carefree mood; the second, a sombre Adagio in four sections (of which the first and last correspond in Bartók’s favourite arch form), while the finale is a playful rondo, which effortlessly incorporates a double fugue at its heart.