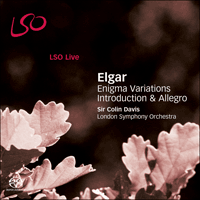 The Variations on an original theme, or ’Enigma’ as they are commonly known, brought Elgar overnight fame when they appeared in 1899. The music is glorious from start to finish, especially in the serene 'Nimrod'. Each variation is given a cryptic title referring to one of Elgar’s friends although the overall enigma behind the original theme has never been deciphered.

‘‘Of all the issues to mark the 150th anniversary of Elgar's birth, few will be more distinguished than these masterful accounts … you have an Enigma Variations as beautifully paced and played as any on disc and a superb Introduction & Allegro by the orchestra that premiered the work under the composer’’ (The Observer)
'Colin Davis's LSO Live recordings of the Elgar symphonies are already jewels in the label's crown, so this release brought with it high expectations. Davis's way with Elgar is always a fairly flexible one … it gives this splendid account of the Enigma Variations a real sense of a living organism. The LSO plays wonderfully' (The Daily Telegraph)
'[Sir Colin Davis] has always been a great Elgarian … their Enigma, captured at the beginning of this year [2007], is one of the most beautifully played I can recall, and certainly one of the most moving accounts of this much-recorded music … this superlative performance is coupled with an equally dazzling account, from 2005, of the Introduction and Allegro for Strings’’ (The Sunday Times)
'There's no sign of ageing in Davis's energetic Enigma interpretation, which enjoys an abundance of characterisation from its well-paced statement of the theme to a series of variations that each carry their own fascination. There is luxurious warmth in every sweeping phrase, but also a driving energy that holds the entire work together' (The Scotsman)

One evening in October 1898, Edward Elgar lit himself a cigar and sat down at the piano. It had been a wearying day, and his playing was aimless – just a kind of improvisatory doodling. Suddenly his wife, Alice, interrupted him:

‘Edward, that’s a good tune.’
I awoke from the dream: ‘Eh! Tune, what tune?’
And she said, ‘Play it again, I like that tune.’
I played and strummed, and played, and then she exclaimed:
‘That’s the tune.’

And that, according to Elgar, is how the theme he was to call ‘Enigma’ came into being. In another version of the story, Alice asks him what he’d been playing: ‘Nothing’, says Elgar, ‘but something might be made of it’. That comment is of more than musical significance, because it seems that for Elgar that theme represented something important about himself. At first he was cagey about this: ‘The Enigma I will not explain – its “dark saying” must be left unguessed’. But 13 years after the hugely successful premiere of the ‘Enigma’ Variations, he told the critic Ernest Newman that ‘it expressed when written (in 1898) my sense of the loneliness of the artist … and to me, it still embodies that sense’.

Loneliness, a sense of nothingness yet combined with great idealism and ambition – all that was true of Elgar. Since the ‘Enigma’ Variations first appeared there has been endless speculation as to whether some musical riddle is contained in that ‘Enigma’ theme: cryptogram perhaps, or a scrambled reference to the well-known tune ‘Auld Lang Syne’ has been suggested. However ingenious or entertaining the results, surely this misses the point. The Variations may begin with ‘nothing’, the lonely, melancholic, self-doubting artist; but they progress to something very different: a depiction of the artist in triumph: in the Finale, ‘EDU’ (‘Edu’ was Alice’s nickname for Elgar), we see the man who has indeed made something of himself. And it is a musical journey through friendship – the 13 vivid musical portraits of his closest friends that build up to the Finale – which has enabled Elgar to reach that longed-for goal. But there is another side to this story. In Elgar’s own words: ‘This work, commenced in a spirit of humour and continued in deep seriousness, contains sketches of the composer’s friends. It may be understood that these personages comment or reflect on the original theme and each one attempts a solution of the Enigma, for so the theme is called.’ So, something of Elgar the Enigma remains unsolved – even the warmest, most understanding friendship cannot completely relieve that ‘sense of the loneliness of the artist’.

After the ‘Enigma’ theme, the first variation depicts Elgar’s wife: ‘CAE’ – Caroline Alice Elgar – ‘a prolongation of the theme with what I wished to be romantic and delicate additions’, was Elgar’s description. No II, ‘HDS-P’ is Hew David Steuart-Powell, a chamber-music partner of Elgar, and clearly a light-fingered keyboardist.

In III, ‘RBT’ mimics Richard Baxter Townsend, eccentric tricyclist with a querulous, reedy voice. IV, ‘WMB’ depicts Squire Baker of Hasfield Court, hurriedly presenting his house guests with the day’s itinerary then slamming the door as he leaves. V, ‘RPA’ reveals two sides of Matthew Arnold’s son Richard, serious in conversation, but with a ‘funny little nervous laugh’ on woodwind. ‘Pensive, and for a moment, romantic’ was Elgar’s description of Isabel Fitton, the subject of No VI, ‘Ysobel’ – a viola player, hence the starring role for this instrument. No VII ‘Troyte’ depicts more music-making, though this time it is the ‘maladroit’ efforts of the architect Arthur Troyte Griffith to play the piano. According to Elgar, No VIII, ‘WN’ is ‘really suggested by an 18th-century house’: Sherridge, near Malvern, home of Winifred Norbury. But Winifred herself appears in ‘a little suggestion of a characteristic laugh’.

Then comes the famous ‘Nimrod’, Variation IX. This is a portrait of one of Elgar’s closest friends, A J Jaeger (‘Jaeger’ is the German for ‘hunter’, and Nimrod is the hunter mentioned in the Biblical book of Genesis). Specifically this music records ‘a long summer evening talk, when my friend discoursed eloquently on the slow movements of Beethoven … It will be noticed that the opening bars are made to suggest the slow movement of the eighth sonata (‘Pathétique’).’ No X, ‘Dorabella’ was Elgar’s nickname for Dora Penny. ‘The movement suggests a dancelike lightness’, Elgar wrote. It does – but it also reveals great tenderness; of all Elgar’s friends Dora was one of the most helpfully responsive to Elgar’s devastating mood-swings. ‘GRS’ (G R Sinclair, organist of Hereford Cathedral), was the owner of the bulldog Dan, who fell into the River Wye, scrambled out and barked in triumph. ‘Set that to music’ said Sinclair. The result was Variation XI. The heartfelt cello melody of XII is a tribute to Basil G Nevinson, whose faith in Elgar sustained him in times of crisis and neglect. The subject of Variation XIII, ‘***’, is more mysterious.

Elgar tells us that he intended it for the ‘most angelic’ Lady Mary Lygon, who was then on a long sea-voyage – hence the clarinet’s quotation from Mendelssohn’s Calm Sea and Prosperous Voyage, and the depiction of a low throbbing ship’s engine. But according to Ernest Newman, there is also the memory of an earlier love lost and still yearned for – there is certainly a strange poignancy here. But it is Elgar the self-made Edwardian gentleman who strides out in the Finale, ‘bold and vigorous in general style’. Memories of earlier friends’ variations are recalled, especially ‘CAE’ and ‘Nimrod’. But the end is a glad, confident apotheosis, culminating in a foretaste of the first phrase of Elgar’s next orchestral masterpiece, the First Symphony – a celebration of the present, and hope for the future.

What makes Elgar’s orchestral music sound like Elgar? What makes an orchestral song with an accompaniment by Elgar, and another orchestrated by someone else, sound so different? One of the most characteristic aspects of Elgar’s orchestral style is the way he writes for the string orchestra, both on its own or in a larger texture, emphasising tone and polyphony. This may particularly be seen in the Introduction and Allegro, which for its virtuosity and sonority is a supreme achievement for the string orchestra, fully reflecting Elgar’s first-hand knowledge as a former violinist himself. Elgar lays his score out for string quartet and string orchestra divisi throughout, though the basses are only divided at a couple of points.

By 1905 Elgar, knighted the previous year, was at the height of his powers and of his reputation. With the advantage of hindsight we know that over the next few years he would produce The Kingdom, the First Symphony and the Violin Concerto; yet at the time, of course, he could have no such foresight or confidence in his muse. He was in one of those depressions that came on him after completing major works and before the next had been started. He was also suffering from indifferent health and under continuing financial pressures.

This is very much a London Symphony Orchestra work. The previous year Elgar had produced In the South, and now his friend A J Jaeger at Novello suggested he might write a brilliant work for strings for the then recently formed LSO. Elgar responded to the suggestion indicating that it would contain ‘a devil of a fugue’. The work was ready quickly and Elgar conducted it in the LSO’s concert at Queen’s Hall on 8 March 1905. The printed score is dedicated ‘To his friend Professor S S Sanford, Yale University, USA’, where Elgar went in the summer of 1905, to receive the award of an honorary degree.

The exhilaration and open-air character of the Introduction and Allegro was probably most deeply etched in the musical mind of the nation by the Ken Russell television film on Elgar, the most notable event which effectively re-launched Elgar as a major figure in the early 1960s. Written at a time when there were not many popular works for string orchestra heard at symphony concerts, the form of the piece is original: Elgar’s personal amalgam of elements from concerto grosso and sonata form with a vigorous fugue to mark the climax. We might imagine that Elgar’s imagination had been sparked by Tchaikovsky’s Serenade for Strings, and he certainly had conducted the Waltz in 1898, but it was then not widely played and on its appearance at Queen’s Hall in 1902 Elgar was ill.

Elgar’s Introduction is built round three main features, the opening ‘crunch’ of all players double-stopping very loudly with a vigorous down bow followed by accented descending triplets, played with as much sound and tone as possible. Then immediately an ascending theme first played by the solo quartet, the rubato (ebb and flow) built in with tempo markings every couple of bars – allegro – moderato – rallentando – a tempo – largamente – allegro etc. A third idea is presented by solo viola and is said to have been suggested to Elgar years before when he heard distant singing of a Welsh folksong when in the Wye Valley. The tune here is Elgar’s own but it is often referred to as his ‘Welsh’ tune. The tune is taken up by the full body of strings and is dramatically worked out with the other ideas of the Introduction. The second idea of the opening becomes the main theme of the Allegro, followed by a contrasting but vigorous new one in repeated semiquavers, first on solo quartet, quickly answered by the upper strings. A brilliant and virile contrapuntal development, Elgar’s fugue, follows before we reach the final coda with the ‘Welsh’ tune, molto sostenuto, nobly leading to a ringing close.