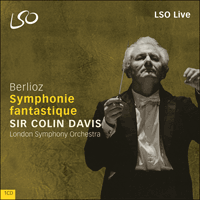 One of the greatest conductors of Berlioz's music, Sir Colin Davis presents a sensational reading of the composer's symphonic masterpiece. The recording captures the breathless exhilaration of the live performances to perfection.

‘‘Berlioz’s greatest interpreter of modern times recorded the Symphonie fantastique three times, but this most recent version is the most gripping and satisfying, deftly treading a fine line between self-revelation and self-indulgence. The volcanic outpourings of feeling are as intense as they should be, yet in the quieter moments—especially in the central ‘Scene in the Country’—Davis achieves a wonderfully expressive pianissimo, in which every detail seems to convey meaning, all caught splendidly by the live recording’’ (BBC Music Magazine)
'This recording brings the trademark LSO Live sound quality and concert atmosphere to the opium-inspired musical love letter … the LSO are on top form … you can almost see the instruments dancing under Davis's command' (The Observer)
'It’s hard to imagine a better live performance of this classical masterpiece' (Classic FM)
'The playing of the LSO for their chief conductor is genuinely world-class … every rhythm is tightly sprung, every climax charged with energy, and the hallucinatory mood of the last two movements grows ever more intense' (The Guardian)
'From the ardent passions and fevered imaginings of the first movement on, all the excitement of these performances is captured' (The Times)
'In this thrilling live recording, the music bristles with the excitement of a first encounter, yet one enriched by long experience' (The Sunday Times)

Hector Berlioz was born in south-east France in 1803, the son of a doctor. At the age of 17 he was sent to Paris to study medicine, but had already conceived the ambition to be a musician and, after a year at the School of Medicine, became a pupil of the composer Jean-François Le Sueur. Within two years he had composed the Messe solennelle, performed in 1825.

In 1826 he entered the Paris Conservatoire, winning the Prix de Rome four years later. Gluck and Spontini were important influences on the formation of his musical style, but it was the discovery of Beethoven at the Conservatoire concerts, inaugurated in 1828, that was the decisive event in his apprenticeship, turning his art in a new direction: towards the dramatic concert work, incarnating a poetic subject or idea that is 'everywhere present' yet subservient to musical logic. His first fully characteristic large-scale work, the autobiographical Symphonie fantastique, followed in 1830.

After a year in Italy he returned to Paris and began what he later called his 'Thirty Years War against the routineers, the professors and the deaf'. The 1830s and early 1840s saw a series of major works: Harold en Italie (1834), Benvenuto Cellini (1836), the Grande Messe des morts (1837), the Shakespearean dramatic symphony Roméo et Juliette (1839), the Symphonie funèbre et triomphale (1840), and Les nuits d'été (1841). Some were well received; but, quite early on, he discovered that he could not rely on his music to earn him a living and support his wife and child. He became a prolific and influential critic – a heavy burden for a composer but one that he could not throw off. In the 1840s he took his music abroad, and established a reputation as one of the leading composers and conductors of the day. He was particularly celebrated in Germany (where Liszt championed him), in Russia (where the receipts from his concerts paid off the debt incurred from the Parisian failure of La damnation de Faust in 1846), in Prague, Vienna, Budapest and London. These years of travel produced much less music: though he wrote the Te Deum (1849) it had to wait six years to be performed. But in 1854 the success of L'enfance du Christ in Paris encouraged him to embark on a project long resisted: the composition of Les Troyens, an epic opera based on the Aeneid, which would assuage a lifelong passion and pay homage to two great idols, Virgil and Shakespeare. Although Béatrice et Bénédict (1860–62), the comic opera after Shakespeare's Much Ado About Nothing, written for Baden-Baden, came later, Les Troyens (1856–8) was the culmination of his career. It was also the cause of his final disillusionment and the reason, together with increasing ill health, why he wrote nothing of consequence in the remaining six years of his life. The work was cut in two, and Part 2 only performed, in 1863, in a theatre too small and poorly equipped. Berlioz died in 1869.

With all its innovations – including the introduction of instruments, textures and rhythms new to symphonic music – the Symphonie fantastique has its roots in the music of the past: first, Gluck and Spontini, whose operas were for several years Berlioz's main diet and whose melodic style he absorbed into his inmost being when he first came to Paris in 1821, a boy of 17 who had never heard an orchestra; then Weber, whose Freischütz enchanted him at the Odéon in 1824–5; and finally Beethoven, discovered at the Conservatoire concerts in 1828. Beethoven, with his revelation of the symphony as a dramatic form par excellence, was the springboard for Berlioz's great leap into unknown territory.

True, no-one had composed symphonic music or used the orchestra quite like this before. As Michael Steinberg says, 'no disrespect to Mahler or Shostakovich, but this is the most remarkable First Symphony ever written'. Certainly, it was typical of Berlioz's boldness and freedom of spirit that his first major orchestral work should comprise a mixture of genres analagous to what the Romantic dramatists were attempting after the example of Shakespeare, and that in doing so he should override the normal categories of symphonic discourse and create his own idiosyncratic version of classical form in response to the demands of the musical drama. Yet the score presented at the Conservatoire in December 1830 was, to him, the logical consequence of the revelation he had had two years earlier in the same hall. It was addressed to the same eager young public and performed by many of the same players, under the same conductor, François Antoine Habeneck.

It might embody autobiographical elements: not just his much publicised, unrequited passion for the Shakespearean actress Harriet Smithson, but his whole emotional and spiritual existence up until then – as he wrote at the front of the manuscript, quoting a poem by Victor Hugo, 'All I have suffered, all I have attempted … The loves, the labours, the bereavements of my youth.' Yet, for Berlioz, all this was not essentially different from what Beethoven had done in his Fifth and Sixth symphonies. Carrying on from Beethoven, he could use intense personal experience, and movement titles, to bring music's inherent expressivity further into the open, and at the same time extend its frame of reference and blur still more the distinction between so-called pure music and music associated with an identifiable human situation (as most music has been since the beginning of time). All sorts of extramusical ideas could go into the composition, yet music remained sovereign – as Beethoven said of the Pastoral Symphony, 'expression of feeling rather than painting' – the whole contained within a disciplined musical structure. The literary programme offered to the Conservatoire audience gave the context of the work; it introduced the 'instrumental drama' (to quote Berlioz's prefatory note) whose 'outline, lacking the assistance of speech, needs to be explained in advance'. It is not this that holds the symphony together and makes it a timeless record of the ardours and torments of the young imagination. The music does that. The five movements may be summed up as follows:

Rêveries – Passions: Slow introduction; sadness and imagined happiness, creating out of the state of yearning an image of the ideal woman (Allegro), represented by the idée fixe, a long, asymmetrically phrased melodic span, first heard virtually unaccompanied, then gradually integrated into the full orchestra. The melody, in its alternate exaltation and dejection, its fevers and calms, forms the main argument. At the end, like a storm that has blown itself out, it comes to rest on a series of solemn chords.

Un bal: At which the beloved is present. Waltz, at first dreamlike, then glittering, finally garish. Middle section with the idée fixe assimilated to the rhythm of the dance.

Scène aux champs: A shepherd pipes a melancholy song, answered from afar by another. Pastoral scene: a long, serene melody, with similarities of outline to the idée fixe and, like it, presented as a single line and then in progressively fuller textures. Agitated climax, precipitated by the idée fixe, which later takes on a more tranquil air. Dusk, distant storm. The first shepherd now pipes alone. Drums and solo horn prepare for:

Marche au supplice: The artist has killed his beloved and is now marched through the streets. The dreams of the first three movements are now intensified into nightmare and the full forces deployed: massive brass and percussion, prominent (and grotesque) bassoons. The idée fixe reappears pianissimo on solo clarinet, cut off by the guillotine stroke of the whole orchestra.

Songe d’une nuit de sabbat: Sabbath Strange mewings, muffled explosions, distant cries. The executed lover witnesses his own funeral. The beloved melody, now a lewd distortion of itself, joins the revels. Dies irae, parody of the church's ritual of the dead. Witches' round dance. The climax, after a long crescendo, combines round dance and Dies irae in a tour de force of rhythmic and orchestral virtuosity.

The opéra-comique Béatrice et Bénédict that Berlioz based on Shakespeare's Much Ado About Nothing was first performed in the summer of 1862, when it inaugurated the newly built theatre at the fashionable spa-town of Baden-Baden. During its composition, Berlioz was often ill and in pain; but the music breathes an air of exuberant gaiety, only momentarily touched with sadness. Its character is summed up by the brilliant overture (woven out of half a dozen different numbers in the score): racy, teasing, sharp-fingered, like the war of words behind which Beatrice and Benedick hide their mutual attraction, but also with warmth of heart and a delicate spirit of fantasy, as we hear in the expressive melody of the slower section and its magical pianissimo conclusion, taken from the Nocturne that closes Act 1.

However, it is the opening theme, a glinting, mercurial figure that dominates the overture. Its nimble triplet rhythm and angular dotted phrase work their way in everywhere and spread their laughter throughout the musical texture of the two allegro sections. This is the music to which Beatrice and Benedick, at the end of the opera, celebrate love as 'a torch, a flame, a will-o'-the-wisp, coming from no-one knows where, gleaming, then vanishing from sight, to the distraction of our souls'.