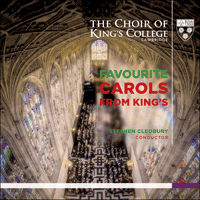 Favourite Carols from King’s is a collection of the most popular carols featured in the Festival of Nine Lessons and Carols over the years. Highlights include Once in Royal David’s City, In the bleak mid-winter, and Hark! the herald angels sing. It provides at once a survey of the King’s Christmas tradition and a snapshot of the choir as it is today.

'The choir's glory remains its boy trebles, whose gleaming descants, vibrato-free production and tonal freshness are invariably the icing on the cake in these typically polished, debonair performances' (BBC Music Magazine)

'King’s Choir is clearly in excellent shape' (The Sunday Times)
'If you want a disc of well-loved carols and one which offers the 'imprimatur' of the King's College Choir then this disc will serve you well. The choir is on fine form, the three Organ Scholars between them provide expert accompaniments to many of the carols and the performances have been well recorded … a generous selection of mostly traditional seasonal fare … satisfyingly performed' (MusicWeb International)

King’s College Choir and Christmas are so closely associated in the public mind that it is sometimes tempting to protest that King’s is not just for Christmas; indeed, the acclaimed Concerts at King’s series, which brings top musicians to the College on a regular basis, and the great success of the annual Easter at King’s festival, from which the BBC regularly broadcasts, has brought attention to the year-round musical life of this unique College.

King’s Choir has been singing services in the College’s Chapel for over 550 years, making it one of the oldest singing ensembles in the world. In all but the dark years of Cromwell’s Commonwealth in the 1650s, when choirs were silenced across the realm, Christmas would have been observed chorally in the glorious Chapel, which itself represents the pinnacle of late Perpendicular architecture.

But it was not until the early 20th century that the strong association with Christmas was forged. Indeed, it seems that in former times, neither Christmas nor Easter were regarded as the most important high day in the College’s year; one chorister of the 1830s recalled in later life that the boys were only given puddings for dinner on two days a year: 6 December and 25 March—the feasts of St Nicholas and the Annunciation—the Chapel being dedicated to St Nicholas and the Virgin Mary. This particular chorister made no mention of Christmas at all in his memoirs.

All was to change in 1918, however, when a former chaplain of King’s, Eric Milner-White, returned from the First World War, where he had acted as an army padre, to become Dean of Chapel. He took up an idea hatched by Bishop E W Benson for use in his cathedral at Truro on Christmas Eve nights and introduced to King’s A Festival of Nine Lessons and Carols as a gift to the city of Cambridge and in memory of the many Kingsmen who had not returned from the War.

Milner-White was only 34, but he clearly managed to convince the then Organist, A H Mann, who had been in his post for over forty years, of the merits of this imaginative liturgical innovation. The Provost of the College, the famous writer of ghost stories, M R James, was also enthusiastic about it, describing it as an event that moved him more than anything he had ever witnessed. In turn, the choristers’ experience of Christmas was transformed from that of their pudding-less predecessors, the Dean describing their day in terms of cake, crackers and half crowns.

Courtesy of the BBC, who began broadcasting it in 1928, the service soon reached audiences both in the UK and beyond, and carols sung from King’s became part of Christmas for people throughout the world. In 1954 a quite separate, televised service, first occasional and now an annual broadcast, was broadcast by the BBC in 1954, reinforcing the strong association of Christmas and King’s with visual images of the Chapel. Meanwhile, Christmas recordings under Boris Ord on ‘78s and, later, in every conceivable format, gave listeners the chance of hearing and re-hearing carols sung at King’s.

The tradition would not have lasted but for the continuously high standards maintained by King’s College Choir, an achievement which, given the high turnover of members of the Choir (the boys spending five years in it and the undergraduate men only three), must largely be attributed to the Organists/Directors of Music who have presided over the Choir since 1876: A H Mann, Boris Ord, David Willcocks, Philip Ledger and Stephen Cleobury. Each has striven to develop the service to ensure that it does not stagnate, with the introduction, for example, of carols in foreign languages in 1978 and, in 1983, the inauguration of the practice of commissioning a new carol annually. David Willcocks’ dual role at King’s, and as editor of the OUP’s hugely influential Carols from Choirs series, served to reinforce the close association of King’s with Christmas carols and to take that tradition to other choirs across the UK and beyond.

The fact that only five musicians have presided over the Choir since the inception of the Christmas Eve service and that their combined tenures cover a period of almost 140 years, together with the enormous respect each has had for his predecessors, has ensured that the Choir has enjoyed a remarkable period of excellence, characterized both by a profound esteem for the traditions of the past, as well as a determination to keep King’s Choir at the forefront of technological innovation, be it the wireless in 1928, television in the 1950s, the remarkable series of recordings made in the 1960s and 70s in the early years of LPs, CDs in the 1980s and 90s, through to webcasting and own-label recordings in the 21st century.

What is it like for the Choir?
A few minutes before 3 o’clock on Christmas Eve, the members of King’s College Choir process through a darkened Chapel to the west end of the building, where they form themselves into two curved lines. Every eye is on the BBC’s flashing red light, while the organ scholar, some distance away in the organ loft, with an identical light in his sights, and a camera focused on Stephen Cleobury, the conductor, prepares to end his improvisation with the first three notes of Once in royal. As the Radio 4 news bulletin comes to a close, a young chorister, on Stephen Cleobury’s signal (he is listening to the news on headphones), steps forward: the light shines a steady glow, the chorister begins to sing, and millions of people across the world listen to the famous opening solo of A Festival of Nine Lessons and Carols.

For those in the Chapel the service feels surprisingly intimate. In the vestry beforehand, it is sometimes hard to be aware that there is so great a number of listeners in so many different places waiting to hear the service. The BBC’s recording equipment is remarkably unobtrusive and, as the service progresses, it is possible to imagine that this is rather like one of the services that take place in the Chapel on a daily basis during the University’s term time. The congregation is made up of the people who have joined a queue (often in the early hours of the morning or even several days before) as well as senior members of the College and families of the members of the Choir, who, sitting in the choir area, well away from the opening solo, can only guess at which of the choristers was chosen to sing Once in royal.

Everything has been done by 24 December to ensure that the Choir is completely familiar with the music that will be sung. Quite intensive rehearsal and various concerts and services during December have given an opportunity to perform most of the music. These include the annual concert at a packed Albert Hall, the Christmas carol service for Cambridgeshire schools, and often a short foreign tour. The televised service, Carols from King’s, pre-recorded in mid-December, is an entirely different service from the live Festival of Nine Lessons and Carols broadcast, with different readings and, for the most part, different music.

For the choristers, the end of school term signals a period of relative relaxation, in which preparation for the Christmas services is punctuated by outings and entertainments of various kinds. For the King’s Men, the choral scholars of the Choir, it is both a busy and an enjoyable time. Their December activities include singing to patients at Addenbrookes Hospital, providing entertainment at corporate functions in Cambridge and elsewhere, not to mention local Cambridge hostelries, and, on Christmas Eve itself, singing sacred music at 9.45a.m. for Radio 4’s Morning Service and offering somewhat lighter fare to those queuing for the Festival at lunchtime.

There is certainly something of a sense of relief and exhilaration after the Festival ends at 4.30pm. Most members of the Choir rush off to watch Carols from King’s on BBC2 and then reassemble for dinner—the choristers and their families at the College School and the choral and organ scholars and theirs in College Hall. After-dinner games have become a tradition for the men, though no lie-in is in prospect the following morning, since a service at 11am, preceded by a rehearsal, is in the offing. The boys wake up on Christmas morning to Father Christmas bearing stockings; they all know that this is the Headmaster and appreciate his going to the trouble of dressing up.