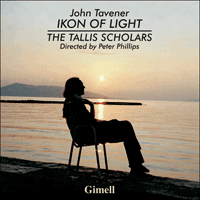 Cover artwork: Photograph of Sir John Tavener on the Greek island of Aegina in January 1981 by Peter Phillips.

'John Tavener created an early reputation as both prodigy and agent provocateur with large-scale unconventional works. Following his conversion to the Orthodox Church his music became inspired by its liturgical and mystical texts. The results of this transition are apparent in all four works on this recording, and are profoundly connected with John Tavener’s extended collaboration with The Tallis Scholars' (Ivan Moody)

'Perhaps the time is right for the musical establishment (and the record industry) to begin to recognize Tavener as one of our most gifted and important composers of choral music. I hope so, for a talent so prodigious and special as his appears all too infrequently in today’s climate of intellectually orientated creativity … Ikon of Light dates from 1984, and is arguably one of his most sublime creations … The Tallis Scholars have a very special affinity and affection for Tavener’s music (he has written a number of works with them in mind) and this is evident from their committed performance of this penetrating and visionary work … superbly recorded in the Gimell tradition … a moving and richly rewarding programme that deserves to win many friends' (Gramophone)
‘‘Ikon of Light comes steeped in the traditional soundscape of Orthodox worship and is timeless in its musical response to the idea of an icon opening a window on eternity. It was commissioned by The Tallis Scholars whose atmospheric early recording is hard to beat’’ (BBC Music Magazine)

The turning towards the spiritual and musical sources of the Orthodox Church that took place in the work of John Tavener (1944–2013) during the late 1970s and early 1980s was to be part of a series of changes in the composer’s stylistic trajectory over the years that, though dramatic, never left the attentive listener in doubt as to the singular purpose of this particular creative imagination.

Born in London in 1944, Tavener had created a reputation for himself as both prodigy and something of an agent provocateur with regard to the status quo in contemporary music with large-scale, unconventional works such as In Alium (1968), Celtic Requiem (1969), Últimos Ritos (1969–72) and the opera Thérèse (1973–76). His conversion to the Orthodox Church (either in 1976 or 1977; the date varies according to source) meant that he ceased in most respects even to operate within the framework of the concert-going avant-garde. Indeed, Tavener wrote:

I’d left the world of Western music altogether during this period. This music was like Ithaka; she had given me a marvellous journey and without her I would not have set out, but now, it seemed, she had nothing left to give me. (John Tavener, The Music of Silence, London: Faber, 1999, 46)

Instead, his concerns came to centre on the liturgical and mystical texts of the millennial Orthodox Christian tradition and the music that corresponded to them.

The results of this transition are apparent in all four of the works on this recording, and are profoundly connected with Tavener’s extended collaboration with The Tallis Scholars at this time. Funeral Ikos and the Great Canon of St Andrew of Crete were both written in 1981, and their first performances by The Tallis Scholars took place in Keble College, Oxford, as part of a programme that also included Russian medieval chant and which would shortly lead to a remarkable recording (‘Russian Orthodox Music’, Gimell CDGIM 002). The Lamb dates from 1982 and Ikon of Light, written specifically for The Tallis Scholars, from 1983.

Funeral Ikos is a setting, both beautiful and austere, of words from the Orthodox service for the burial of priests, in the magnificent translation by Isabel Hapgood. The words are consolatory in tone, though they do not minimize the reality of death, the gateway to Paradise. Tavener’s music has its origins in Russian chant, though the harmonic progression for the ‘Alleluia’ refrain is distinctively his, particularly the penultimate chord.

That chord also appears as an essential part of the harmony of The Lamb, a short carol to the famous poem by William Blake, that was composed in a rush of inspiration and sent immediately to the Choir of King’s College, Cambridge, for inclusion in the annual service of Nine Lessons and Carols, as well as to Martin Neary, the director at the time of the Choir of Winchester Cathedral, who gave the first performance on 22 December 1982. The music is built on a simple melodic idea and its inversion; the simple but ambiguous chord (in ascending order, the notes A, C, G, B), symbolizing for the composer the simultaneity of joy and sorrow, would appear again and again in his later music.

The highly penitential Great Canon of St Andrew of Crete is in fact a setting of only the first ode of the very long Great Canon. The Irmos (the model verse providing the metre for the subsequent verses) is set first as a unison choral chant and then in a harmonized version reflecting the vocabulary of medieval Russian polyphony. The subsequent troparia, or verses, of the ode are set for solo bass chanter, with the full choir responding with the refrain ‘Have mercy upon me, O God, have mercy upon me’ alternating between English, Greek and Slavonic. In fact the piece is a very slow chromatic descent, a musical prostration; Tavener has noted that the work was inspired by his feelings of penitence during the Lenten season.

Ikon of Light was given its premiere by The Tallis Scholars and the Leda String Trio at the Cheltenham Festival in July 1984. It is a work that encapsulates in many ways, and in monumental style, the composer’s espousal of an astounding simplicity to convey highly complex theological concepts. Tavener has recourse in Ikon of Light to the mystical texts of St Symeon the New Theologian (949–1022). It is symmetrically structured, centred on an extended, radiant setting of St Symeon’s Mystic Prayer to the Holy Spirit:

St Symeon’s writings are suffused with the idea of God as light. He received a vision of the Divine Light when aged about twenty, and seven years later became a monk. Tavener’s setting of this invocation allows him to give full rein to his melodic gifts, over a range of four octaves, and the gradual increase in intensity and the sense of movement-within-stasis create an extraordinary and intense luminosity fully expressive of St Symeon’s vision. The melodic material is essentially derived from a descending scalic figure (G to C), with subsequent melodic extensions, passed between each voice and accompanied by a drone. This figure builds to a sustained, luminous full-choir drone on a C major chord (actually ending on a first inversion). There is then an interlude for string trio, and at the choir’s re-entry, the thematic scale returns in inversion, built now on a minor scale and melodically different. As in the first section, the drone builds to a full chord, this time G minor. Another interlude follows, built on the inverted scale, and then choir and trio come radiantly together, with the original melodic continuation of the scale stated in stretto.

The shorter movements on either side are related to each other symmetrically – I to VI, II to VII and III to V. They amplify and comment on the central idea of light: Tavener simply sets, in Greek, the words phos (light), dhoxa (glory) and epiphania (shining forth), and the Trisagion (‘Holy God, Holy mighty, Holy immortal, have mercy upon us’). The four outer movements, ‘Phos I’, ‘Dhoxa’, ‘Phos II’ and ‘Epiphania’, are apparently static sonic blocks, but in fact they have recourse to the composer’s frequently employed techniques of canon and palindrome, often resulting in considerable dissonance, and are organized around very precisely indicated silences (parts of the above discussion are drawn from the chapter on Tavener’s music in my forthcoming book, Modernism and Orthodox Spirituality in Contemporary Music).

Silence is naturally an eminently mystical (pre-)condition. Indeed, Tavener, in interview with Paul Griffiths in 1985, said:

In fact, right up to the moment of his untimely passing in November 2013, a little over two months before his 70th birthday, Sir John Tavener had not fallen silent, even though the remarkable Towards Silence, from 2007, explored this idea very directly. Indeed, the fluidity and still-imperative nature of his creative gifts to the last seemed to contradict the very idea, and it was certainly extremely difficult to imagine such a singular and profoundly creative voice not requiring an outlet in musical composition. That voice will continue to resound in the extraordinary musical legacy he has left behind.

Cover artwork: Photograph of Sir John Tavener on the Greek island of Aegina in January 1981 by Peter Phillips.