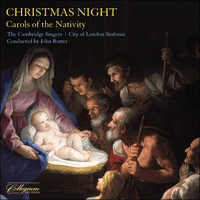 Carols of the Nativity

Twenty-two carols spanning more than six centuries: some of these carols have long been widely known and loved, others have become so thanks to the annual Festival of Nine Lessons and Carols at King’s College, Cambridge, and a few were newly written. But all of them focus on the central event of the Christmas story—the birth at Bethlehem—and on the characters in that story: the angels, the shepherds, the wise men, and the mother with her child. 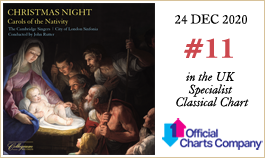 In dulci iubilo
According to legend, angels sang this carol to Heinrich Suso, the fourteenth-century German mystic. It quickly became popular, appearing in many collections including Babst’s Gesangbuch of 1545 (Luther’s hymnal) and Piae Cantiones, the Scandinavian hymnal of 1582 that is the source of a number of fine carols and hymns. R.L. Pearsall, who made this classic choral arrangement in 1838 for the choral society in Karlsruhe, was an amateur composer and antiquarian who lived in Germany and Switzerland for much of his life.

Adam lay ybounden
This striking fifteenth-century lyric has attracted several composers, among them Peter Warlock and Benjamin Britten. Boris Ord, the composer of the setting sung here, was organist of King’s College, Cambridge from 1929 to 1957.

Christmas night
Arbeau’s Orchésographie of 1588 is a French treatise on dancing containing a number of attractive tunes, one of which (the Branle de l’official) has become universally popular as the carol Ding dong! merrily on high. The melody of Christmas Night (the Branle de Poitou in Arbeau's treatise) has also been used in Peter Warlock's Capriol Suite for string orchestra. The words were specially written for this melody.

Once, as I remember
This rare and beautiful carol was first published in an Italian collection of 1689 called Corona di sacre canzoni o laude spirituali, where its melody line was given with an Italian text (Antururù). In 1920 it was included in An Italian Carol Book (one of several important collections edited by Charles Wood and G. R. Woodward) in a four-part version by Wood with a new text by Woodward.

A Spotless Rose
According to its composer, this ‘carol-anthem’ was written at a single sitting, on 22 October 1919. It remains one of the best-loved and most characteristic examples of his style: sensitive, melodically fluent, harmonically rich and subtle, and of an exquisite choral sonority.

In the bleak mid-winter
Harold Darke was a London organist and composer. In the bleak mid-winter, perhaps his best-known composition, was written in 1911 and virtually forgotten until the early 1960s, when it was included in the King’s College Christmas Eve service by Sir David Willcocks. The public response was immediate and unprecedented, and the carol has enjoyed widespread and uninterrupted popularity ever since.

There is a flower
The text of this carol is one of many early English lyrics that have been set to music by recent British composers; its author was a Shropshire monk of the early fifteenth century who was both deaf and blind. The imagery of the poem is of a ‘Jesse tree’, often depicted in medieval painting and stained glass. The music was written at the invitation of Dr George Guest, director of the choir of St John’s College, Cambridge.

The Cherry Tree Carol
This carol was published, in differing versions, in many nineteenth-century English collections. In some of these Joseph responds to Mary’s request with the words ‘Let him pluck thee a cherry / That brought thee now with child.’ After the tree miraculously bows down, Joseph repents of his unkind aspersion. Sir David Willcocks, whose setting of this carol dates from 1969, was organist of King’s College, Cambridge (a post that includes the directorship of the world-famous choir of sixteen boy choristers and fourteen men) from 1957 to 1974.

I wonder as I wander
The musical folklorist and singer John Jacob Niles collected this haunting carol in the Appalachian mountains in the 1930s. It was first published in his collection Songs of the Hill Folk and soon became widely known in North America, both from Niles’s own solo performances and in choral arrangements. More recently it has gained a place in the English carol repertory; the present setting, for unaccompanied choir with baritone solo, dates from 1981.

Candlelight Carol
This was written in response to a commission from the Church of the Assumption, Pittsburgh, in 1984. Originally for organ, the accompaniment was later scored by the composer for flute, oboe, harp and strings, in which version it is performed here.

Tomorrow shall be my dancing day
The age-old relationship between religion and the dance is the source of the unusual and vivid imagery of this carol (which, in its complete from, has eleven verses covering all the events of Christ's life up to the Ascension). The text is believed to date back earlier than the seventeenth-century; it first appeared in print together with its tune in 1833. Sir David Willcocks’s radiant setting, written for King’s College Choir in 1966, has established itself as a classic.

A virgin most pure
One of the most delightful of English folk-carols, A virgin most pure tells the Christmas story with affecting simplicity. Charles Wood (whose settings of many carols including this one have come to be regarded as definitive) was a lecturer and later the Professor of Music at Cambridge University. He is remembered now mainly for his fluent and craftsman-like choral writing.

I sing of a maiden
This, the loveliest of all medieval religious lyrics, has received many musical settings: Patrick Hadley’s, with its magical atmosphere of stillness and peace, remains unsurpassed among them. Like Wood, Hadley was a Cambridge composer and Professor of Music (from 1946-62). He was a pupil of Vaughan Williams and outstandingly gifted, but his life was overshadowed by personal tragedy and his output remained small.

Lute-book lullaby
This was originally a solo song with lute accompaniment—one of a whole collection of them compiled in the early seventeenth century by the lutenist William Ballet, hence the title. Lullabies for the Christ child had become a popular form since the appearance of an especially lovely example by Byrd in 1588. The choral transcription by Geoffrey Shaw was made in the 1920s for The Oxford Book of Carols.

The Three Kings
Peter Cornelius was a German composer, a friend of Liszt, and well respected in his own lifetime for his operas and vocal music. The Three Kings was written in 1856 as a solo song with piano accompaniment, No 3 of a set of six Weihnachtslieder (Christmas songs) to texts by the composer. Following the model of Bach, Cornelius introduces a chorale in the accompaniment: appropriately, it is the great Epiphany hymn Wie schön leuchtet der Morgenstern. In the English-speaking world The Three Kings has become a familiar part of many carol services in the choral transcription by Elgar’s friend Sir Ivor Atkins.

Myn lyking
Sir Richard Runciman Terry is remembered for his achievement in rescuing Tudor church music from near-oblivion: he published numerous editions and conducted pioneering performances at Westminster Cathedral, of which he was organist from 1901 to 1924. Myn lyking is one of his handful of published compositions; its choice of text (taken from the important Sloane manuscript) illustrates his interest—not then widely shared—in the riches of early English poetry.

O little one sweet
This German lullaby-carol first appeared in print in Scheidt’s Tablaturbuch of 1650, though it may have been written before then, either by Scheidt himself or by an unknown author. J. S. Bach’s version (in the form of a melody and figured bass) was included in Schemelli’s Gesangbuch of 1736.

All my heart this night rejoices
The composer Ebeling and hymn-writer Gerhardt worked together in the 1660s as Cantor and Deacon respectively at the church of St Nicolai in Berlin. Ebeling wrote music for more than 100 of Gerhardt’s hymns, which were intended for private devotions rather than congregational use. All my heart this night rejoices is a felicitous translation of one of them.

I saw a maiden
A number of charming folk-carols from the Basque region of Spain were introduced to England in the 1930s by the London organist and composer Edgar Pettman and popularized by inclusion in the King’s College Christmas Eve service. I saw a maiden is one of the best-remembered of them, though only its verse-melody is of folk origin, the lullaby refrain and the arrangement being Pettman’s own work.

Away in a manger
The anonymous text of this much-loved carol first appeared in A Little Children’s Book for Schools and Families, a publication of the Evangelical Lutheran church in North America. The setting sung here, composed by the American church musician W. J. Kirkpatrick, was the first; it remains the only well-known one in England, though a later setting by J. R. Murray is equally popular in the United States.

Nativity Carol
Written in 1963, this was one of its composer’s earliest pieces. It was published in 1967 with organ accompaniment, and later scored for strings by the composer.

The theme of this album is the birth of Christ, reflected in the words and music of twenty-two carols spanning more than six centuries. Some of these carols have long been widely known and loved; others have become so thanks to the annual Christmas Eve Festival of Nine Lessons and Carols at King’s College, Cambridge; a few are newly written. But all of them focus on the central event of the Christmas story—the birth at Bethlehem—and on the characters in that story: the angels, the shepherds, the wise men, and the mother with her child.