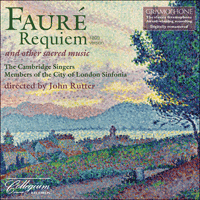 Here is John Rutter’s Gramophone Award-winning 1984 recording of Fauré’s Requiem. The first-ever performance on disc of the work in its intimate original version—famously re-discovered by Rutter in the Bibliothèque Nationale in Paris after a century of neglect—it remains one of the timeless jewels in the crown of the Collegium catologue.

Hailed on release as ‘the Fauré Requiem of the future’ (Music Week), Rutter’s performance with the Cambridge Singers and members of the City of London Sinfonia has transformed the way in which we view one of the great works of European sacred music, and remains definitive.

'Rutter’s chorus is a fine one, immaculate of diction and pure of line; Stephen Varcoe’s light and unforced baritone could well be just what Fauré had in mind and Caroline Ashton’s absolute purity in her brief solo is most moving. The recording is excellent' (Gramophone)
'These works confirm that Faure deserves to be known for more than just his Requiem … [this album] deserves a place in your collection' (Cross Rhythms)» More

‘Hearing Fauré’s Requiem as he intended it to be performed would be a revelation to most people.’ (Robert Orledge, Gabriel Fauré, p. 110)

It is one of musical history’s mischances that the Fauré Requiem was for almost a century known and performed only in a version with full orchestra for which Fauré was very possibly not responsible; the composer’s original version of the work with instrumental ensemble remained unpublished and, until this recording, was unperformed since his lifetime.

Behind this neglect lies a fascinating story. Fauré began work on the Requiem in 1887 purely, in his own words, ‘for the pleasure of it’, though the death of his father in 1885 and of his mother two years later may well have lent impetus to the composition. He was 42 years of age, choirmaster at the fashionable church of the Madeleine in Paris, and gaining a growing reputation as a composer. He completed the work early in 1888 and directed the premiere on 16th January of that year; the occasion was a funeral service at the Madeleine. This ‘first version’ (of which the manuscript of all but the Pie Jesu survives) consisted of five movements: the Introït et Kyrie, Sanctus, Pie Jesu, Agnus Dei and In paradisum—a personal selection of texts laying emphasis on rest and peace with no reference to the Day of Judgement. The instrumentation is restrained and mellow: divided violas and cellos, basses, harp, timpani and organ, with a solo violin in the Sanctus. The strings—probably no more than a handful at the first performance—mostly double the organ, which plays throughout like a Baroque continuo.

Fauré then prepared an expanded version, first given in January 1893. This included two extra movements, the Offertoire (written in 1889) and the Libera me, both calling for baritone solo; the Libera me, dating from 1877, was originally an independent composition for baritone and organ. The instrumentation was also expanded for the 1893 performance: Fauré added horn and trumpet parts to his earlier manuscript, and violins were incorporated in the In paradisum. The trumpet parts are fragmentary and unimportant, but the horns have an essential role in the Libera me and a useful one elsewhere; their fanfare-like figure in the Sanctus is hard to imagine left out, in fact.

The third version of the Requiem—the familiar one with full orchestra—received its premiere in July 1900 at the Trocadéro Palace under the conductor Taffanel; shortly afterwards Hamelle published vocal and orchestral scores. How and why this third version came about is not clear. In 1898 Fauré wrote to Hamelle promising to prepare the Requiem for publication but asking if he could delegate the piano reduction for the vocal score to someone else (his student Roger-Ducasse was entrusted with the task). No question of reorchestration was mentioned at this stage; possibly Hamelle later urged Fauré to rescore the work for full orchestra because it would receive more performances as a concert work than as a liturgical Requiem. Fauré was at the time burdened with teaching and administrative work and may or may not have delegated the rescoring to Roger-Ducasse, who is known to have scored more than one of Fauré’s works. At all events the published score of 1900 (for which the source manuscript is lost) is extraordinarily inaccurate and full of misprints, which suggests that the meticulous Fauré never saw printer’s proofs, at least. There are, moreover, many curious infelicities in the scoring—for example arbitrary recasting of the 1893 horn parts, downward transposition of the ethereal high violin solo in the Sanctus, alterations of string bowing and distortion of the original dynamic markings—which seem to betray an inexperienced hand. Above all, the nature of the Requiem music itself seems to call for the intimacy and clarity of a chamber ensemble rather than full symphonic forces which would swamp a choir such as the modest-sized group of boys and men at the Madeleine for whom the work was written.

The ideal Requiem version seems to me to be that of 1893. The two extra movements in it are surely worth including, and the added horn parts also seem to represent genuine second thoughts on Fauré’s part. At the same time the 1893 Requiem remains a liturgical work for modest forces to perform in church, which is how the composer conceived it. Performing it in this form for the first time in over 80 years was as exciting for me as seeing an old master painting stripped of cloudy varnish and shining forth in all its pristine clarity and splendour.

Like the Requiem, the Messe Basse for sopranos and altos had a complex genesis. It was originally written in 1881 in collaboration with Fauré’s composer-friend Messager for a benefit performance at the fishing village of Villerville here the two men were on holiday: Messager wrote the Kyrie and an O salutaris, Fauré wrote the Gloria, Sanctus and Agnus Dei. The following year it was orchestrated, again in collaboration; then in 1906 Fauré discarded Messager’s Kyrie, substituting one of his own, at the same time discarding his own Gloria but adding a Benedictus based on the Qui tollis section of it. He also recast for organ the original accompaniment of harmonium and violin. In this final form the Messe Basse was published in 1907.

Fauré wrote over a dozen other sacred choral pieces which span the first forty years of his career. The earliest published one was the Cantique de Jean Racine, written in 1865 for a competition at the Ecole Niedermeyer where the 20-year-old Fauré was a student; it won first prize. The later pieces—almost all of them Latin motets—were, like the Messe Basse, essentially simple and practical, well-suited to liturgical use. This simplicity is, however, deceptive: both the Messe Basse and such expertly-wrought miniatures as the four motets here recorded bear Fauré’s unmistakable stamp—in their gentle expressiveness unblemished by the cloying sentimentality of so much nineteenthcentury church music, in their harmonic subtlety, and in their skilful avoidance of the predictably obvious. Above all, Fauré’s instinct for vocal writing ensures melodies that are as grateful for the singer as they are heart-easing for the listener. The popularity of the Requiem and the relative obscurity of Fauré’s other choral music has tended to encourage a view that the Requiem was an isolated miracle in the composer’s choral output; but the fact that so many of Fauré’s fingerprints are also apparent in the Messe Basse and the motets not only sheds valuable light on the Requiem but gives them their own intrinsic interest and appeal. If it remains true that the Requiem is the mountain peak of Fauré’s choral achievement, nevertheless the foothills offer both beauty and refreshment.