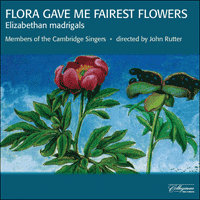 The long reign of Elizabeth I, from 1558 to 1603, was a period of intense musical activity in England. Political and religious conditions were relatively stable; economic prosperity prevailed, with a newly-educated merchant class providing a wider market for music than ever before; music printing was becoming firmly established, spreading the latest compositions among the growing numbers of lay people able to read and perfom music; and a new awareness of Renaissance culture, especially that of Italy, was inspiring a brilliant rising generation of English composers.

The English madrigal reflected all these factors: it was modelled directly on an Italian counterpart, disseminated by printed editions, and performed by amateurs for their own pleasure. The date of its birth is usually given as 1588, the year in which Nicholas Yonge (later a member of the choir of St Paul's Cathedral) published Musica Transalpina, a collection of over fifty Italian madrigals adapted to English texts. Madrigal singing had been going on in England before this, however, as Yonge relates in the preface to his influential volume:

…Since I first began to keepe house in this Citie, it hath been no small comfort unto mee, that a great number of Gentlemen and Merchants of good accompt (as well of this realme as of forreine nations) have taken in good part such entertainment of pleasure, as my poore abilitie was able to affoord them, both by the exercise of Musicke daily used in my house, and by furnishing them with Bookes of that kinde yeerely sent me out of Italy and other places, which beeing for the most part Italian songs, are for sweetness of Aire, verie well liked of all, but most in account with them that understand that language…

Yonge goes on to say that similar English compositions being ‘not many in number’, he was delighted to find ‘certaine Italian Madrigales translated most of them five yeers agoe by a Gentleman for his private delight’; these form the bulk of his 1588 publication—which might well have appeared earlier if there had not been a virtual ban on the publication of secular music in England until then.

Italian madrigals such as those in Musica Transalpina have several clearly recognizable features that define them as madrigals: amorous or pastoral texts, often by considerable poets such as Petrarch, filled with opportunities for the composer to indulge in word-painting; a polyphonic texture of four, five or six equally important voices, with much use of imitation; a continuous but sectional structure, with each new phrase of the text set to new music (as in a motet); sometimes, in the lighter madrigals (known as balletti), dance rhythms, fa la refrains and sectional repetitions resulting in overall ABB or AABB structures.

English composers were not slow to react to the new Italian import. In 1588 William Byrd published his first partly secular vocal collection, Psalmes, Sonets, & Songs of Sadnes and pietie, which consists of adaptions of various of his earlier solo songs. As he explains in the preface ‘heere are divers songs…originally made for instruments to express the harmonie, and one voice to pronounce the dittie…now framed in all parts for voices to sing the same’. Although the fitting of words to all the voices shows Byrd’s awareness of the new vogue for madrigal singing, the pieces in Psalmes, Sonets & Songs (among them the lovely Lullaby and the sprightly Though Amaryllis dance in green) are not madrigals but consort songs, mostly strophic, with the melody in the top voice and the accompaniment—often, admittedly, with touches of imitation—sung by the other voices. The texts are mostly of secondary interest, and word-painting is rare. Byrd was too set in his ways, or too stubbornly independent, ever to adopt the new style; though when he was asked to contribute a piece ‘after the Italian vaine’ to a 1590 collection called Italian Madrigalls Englished, he wrote his only two real madrigals, one of them being the resplendent This sweet and merry month of May, thus proving that he could match any other madrigalist, Italian or English, if he so chose.

Byrd’s younger contemporary and pupil Thomas Morley was the composer who established the English madrigal proper. In the 1590s he began to publish, with great success, madrigal collections of his own and various Italian composers’ work. At times the dividing-line became blurred: his First Booke of Balletts to Five Voyces of 1595 (which includes My bonny lass she smileth, Fyer, fyer!, and Now is the month of maying) consists of altered and improved reworkings of unacknowledged Italian originals by the madrigalist Gastoldi. Doubtless Morley’s enthusiasm for the Italian style was responsible for the borrowing; paradoxically, he also had a streak of chauvinism:

…such be the new-fangled opinions of our countrymen who will highly esteem whatsoever cometh from beyond the seas (and specially from Italy) be it never so simple, condemning that which is done at home though it be never so excellent… (A Plain and Easy Introduction to Practical Music, 1597)

Uncomfortable, perhaps, with the thought that he was actually the musician mainly responsible for popularizing the new form ‘from beyond the seas’, Morley hit on the patriotic and commercially astute idea of linking the English madrigal to the person of Queen Elizabeth (as Byrd had already done in This sweet and merry month of May, with its final section ‘O beauteous Queen of second Troy’). He commissioned twenty-three composers to write madrigals in praise of the Queen, and published the result in a collection called The Triumphs of Oriana in 1601. As a public relations exercise it was a masterstroke: to this day the madrigal is associated with Elizabeth, even though it was essentially a domestic rather than a courtly form.

The last six years of Elizabeth’s reign saw an extraordinary outpouring of madrigal publications by Weelkes and Wilbye, lesser composers such as Kirbye, Farmer and Bennet, and of course by Morley himself. Morley died in 1602 and the Queen the following year; thereafter madrigals began to pass out of fashion, to be replaced by lute songs on the one hand and more ‘popular’ ditties by such composers as Ravenscroft on the other. Post-Elizabethan ‘madrigals’ sometimes embrace one or other of these influences: Gibbons’s The silver swan (published in 1612) is similar to Byrd’s earlier consort songs, with the melody clearly in the top voice; Weelkes’s Ha ha! this world doth pass (1608) is a roistering alehouse song far removed from the cultivated world of the madrigal. The last books of madrigals were published in the 1620s, completing the impressive total of 36 volumes of The English Madrigal School (the name given to it by Edmund Fellowes, the English clergyman who transcribed and republished it all between 1913 and 1924). Fellowes summed up the English madrigal thus:

Nothing is more astonishing in the whole history of music than the story of the English school of madrigal composers. The long delay of its appearance, lagging behind the Italian school by no less than half a century: the suddenness of its development: the extent of the output: the variety and the originality as well as the fine quality of the work: the brevity of its endurance, and the completeness with which it finally collapsed: all these factors combine to distinguish the madrigal school as the strangest phenomenon in the history of English music. (Orlando Gibbons, 1951, p. 74)

For such an apparently familiar form, there is much that is still not known about the English madrigal. No clear evidence exists about performance, though some general conclusions are possible. Unlike the Italian madrigal, which was intended for professional singers to perform at court and so was sometimes quite elaborate and virtuosic, it seems likely that the English madrigalists envisaged domestic amateur performance: rather little overt technical virtuousity is found in the individual voices of the English madrigals, though the musical difficulties of co-ordinating the sometimes complex textures can be considerable. In a domestic environment, music must be adapted (and adaptable) to available resources: the phrase ‘apt for voices or viols’ appears on the title pages of several madrigal publications. The present recording opts for unaccompanied vocal performances, though the instrumental substitution or doubling of voices was no doubt common. The number of singers per part seems unlikely to have been fixed. Some madrigals clearly work best with solo voices on each line; others, such as Draw on, sweet night, seem to call for choral performance. A maximum of ten singers is here used for these items.

The best clue to performance style was given by Morley, in his Plain and Easy Introduction. The English madrigal was never as ‘literary’ as its Italian model, yet texts are all-important—though curiously, hardly any English madrigal texts can be identified, except where they are translations of an Italian original; possibly it was customary for the composers themselves to write them. Morley advises the would-be composer of madrigals (and also, surely, the performer) to ‘possess yourself of an amorous humour (for in no composition shall you prove admirable except you put on and possess yourself wholly with that vein wherein you compose), so that you must in your music be wavering like the wind, sometime wanton, sometime drooping, sometime grave and staid, otherwhile effeminate…and the more variety you show, the better shall you please’.

The sixteenth-century madrigal was an Italian form. The term ‘madrigal’ was loosely applied to a wide variety of music, but generally denoted a polyphonic setting for four or more voices of an amorous or pastoral text which was closely depicted in the music. Thomas Morley transplanted the form into England in the 1590s; this marked the beginning of the brief but brilliant flowering of the English madrigal. Between the 1590s and the early 1620s, twenty composers published a total of 36 books of madrigals, after which the form virtually disappeared. Some of these composers, such as Morley and Weelkes, followed the Italian model closely; others, such as Byrd and Gibbons, mostly stayed with the simpler English form of the consort song, where the tune remains in one voice, wordpainting is not used, and strophic form is preferred to the continuous structure of the madrigal proper. Among the twenty-five items selected for this recording there are examples of several types of piece, ranging from true Italianate madrigals such as Too much I once lamented, via more popular ‘balletts’ such as Fyer, fyer!, to simple part-songs like A little pretty bonny lass. The variety, imagination, and inspired blending of poetry and music characteristic of the best of the ‘English Madrigal School’ (as it was called by Edmund Fellowes, who rescued it from long neglect) afford a particular kind of delight in perfomance, shared equally by singer and listener.