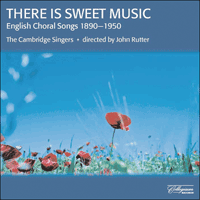 There is sweet music

'These performances are a joy to listen to' (BBC Record Review)
'This is a good introduction to the English Choral Tradition. Although the music was recorded some fifteen years ago it is still fresh' (MusicWeb International)

Enough time has gone by for the school of English music represented on this recording to have become part of history. The chauvinistically exaggerated claims that used to be made on its behalf are now no longer heard; equally, the English composers of the first half of the twentieth century are not now berated or dismissed as often as they once were for their ’provincialism’ and non-membership of the Second Viennese School. Partisan controversy has, thankfully, died down, leaving the music to be enjoyed on its own distinctive merits.

In many ways, of course, it is misleading to speak of a ‘school’ of early twentieth-century English composers: Elgar would have acknowledged little affinity with Stanford, Britten even less with Vaughan Williams—while Delius and Grainger, voluntarily exiled for much of their lives in France and America respectively, worked in relative isolation. Yet there are at least two important threads connecting all these composers (and, arguably, most other English composers down the ages): a love of the human voice, and of the choral medium in particular; and an intuitive responsiveness to poetry.

There are good reasons for both these proclivities. Choral music has always been prominent in English musical life, partly, at least, because of the unique national network of cathedral choirs, which happened to enjoy a significant revival in the later nineteenth century thanks to the Oxford Movement. The amateur choral tradition, established in the cities in the wake of the Industrial Revolution, was also gathering strength at about the time the generation of Elgar and Stanford was coming of age, and it is significant that both the Delius part-songs of 1917 and the Vaughan Williams Shakespeare Songs of 1951 were specifically written for amateur choirs to perform (the Delius pieces for Kennedy Scott’s Oriana Choir, the Shakespeare Songs as test pieces for a competitive festival). Even Benjamin Britten, who outwardly rejected the ‘establishment’ world of English choral music, wrote with the utmost expertise and affection for choir (the Five Flower Songs were written as a silver wedding anniversary present for two friends, a touching revelation of unexpected fondness for the part-song tradition.

Responsiveness to poetry is not, obviously, a trait exclusive to English composers any more than fondness for choral writing is, but it remains undeniable that some of the best English music has been inspired by English poetry—in which category must be included Cranmer’s Book of Common Prayer and the King James Bible. Ever since the time of Chaucer there has been a strong tradition of English lyric poetry lending itself well to musical setting, and, after a period of eclipse, it was enthusiastically rediscovered by the composers of Elgar’s generation. Between 1890 and 1950 there appeared a flood of solo and choral settings of English poetry, unparalleled since the madrigal era three hundred years earlier. Predictably, much of this vast output was of indifferent quality; but it is clear that, for example, Elgar took the writing of partsongs as seriously as he did any of his larger-scale works, and the same could be said, to varying degrees, of his contemporaries and successors. The results achieved were generally, but not always, dependent on the calibre of the poetry set: a fine text such as Shakespeare’s The cloud-capp‘d towers might be expected to call forth fine music (and Vaughan Williams’s setting is described by Michael Kennedy as ‘a perfect miniature masterpiece’)—but possibly more remarkable is Stanford’s transformation of the frankly slight verse of The blue bird into an exquisite jewel. (Andrew Lang, the poet of My Love Dwelt in a Northern Land, was similarly fortunate to have his tiresome piece of Ossianic Gothickry immortalized by Elgar’s gravely beautiful setting.) Britten’s varied and imaginative Five Flower Songs typify his care over choice of words and his uncanny ability to match them to exactly appropriate music; and the same must be said of Elgar’s There is sweet music. Here the other-worldliness of Tennyson’s lotus-eaters’ paradise is symbolized by placing the female voices of the eight-part choir in the key of A flat, a semitone removed from the G major of the male voices. As the piece draws to a close, the music oscillates langorously between chords of A flat and G to the word ‘sleep’, a simple but extraordinarily effective musical evocation.

The rediscovery of English folk-song in the early 1900s by Vaughan Williams, Cecil Sharp and others led to a steady flow of choral folk-song settings by composers great and small, and no survey of English music of the period would be complete without some examples of this charming and often misunderstood genre. To look for ’authenticity’ in such pieces as Grainger’s Brigg Fair or Moeran’s The sailor and young Nancy is to miss the point: the melodies and (no doubt bowdlerized) texts are no more than the points of departure for essentially original compositions which, at their best, display qualities of inventiveness and mastery of choral writing that make them a delight to perform and to listen to.