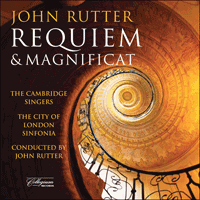 Here are two of John Rutter's most enduring and endearing pieces: the acclaimed Collegium recordings of John Rutter's Requiem and Magnificat conducted by the composer. Since its first appearance in 1985, the Requiem has been performed again and again all over the world. The Magnificat was premièred in New York in 1990 and has similarly enjoyed immense popularity ever since. This, the first recording of each work, is the composer's own definitive recording.

Requiem was written in 1985 and first performed in October of that year. Following the precedent established by Brahms and Fauré, among others, it is not strictly a setting of the Requiem Mass as laid down in Catholic liturgy, but instead is made up of a personal selection of texts, some taken from the Requiem Mass and some from the 1662 Book of Common Prayer. The seven sections of the work form an arch-like meditation on the themes of life and death: the first and last movements are prayers on behalf of all humanity, movements 2 and 6 are psalms, 3 and 5 are personal prayers to Christ, and the central Sanctus is an affirmation of divine glory. The accompaniment to Requiem exists in two versions, one for medium-sized orchestra and the other for organ with six instruments. The orchestral version is the one recorded here.

The passage from St Luke (chapter 1, verses 46-55) known as the Magnificat—a poetic outpouring of praise, joy and trust in God, ascribed by Luke to the Virgin Mary on learning that she was to give birth to Christ—has always been one of the most familiar and well-loved of scriptural texts, not least because of its inclusion as a canticle in the Catholic office of Vespers and in Anglican Evensong. Musical settings of it abound, though surprisingly few of them since J. S. Bach’s give the text extended treatment. I had long wished to write an extended Magnificat, but was not sure how to approach it until I found my starting point in the association of the text with the Virgin Mary. In countries such as Spain, Mexico and Puerto Rico, feast days of the Virgin are joyous opportunities for people to take to the streets and celebrate with singing, dancing and processions. These images of outdoor celebration were, I think, somewhere in my mind as I wrote, though I was not fully conscious of the fact till afterwards. I was conscious of following Bach’s example in adding to the liturgical text—with the lovely old English poem ‘Of a Rose’ and the prayer ‘Sancta Maria’, both of which strengthen the Marian connection, and with the interpolated ‘Sanctus’ (to the Gregorian chant of the Missa cum jubilo) in the third movement, which seems to grow out of the immediately preceding thought ‘et sanctum nomen eius’. The composition of Magnificat occupied several hectic weeks early in 1990, and the première took place in May of that year in Carnegie Hall, New York.