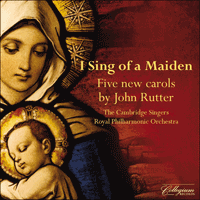 I sing of a maiden & other works

The Christmas music of John Rutter is known and loved across the world, and who better to perform these new works than the composer's own Cambridge Singers?

Es ist ein’ Ros’ entsprungen
Both the melody and text of this lovely German carol date from the late 15th or early 16th century, appearing in print in many versions, of which the best known is the simple harmonization by Michael Praetorius published in 1609. The idea for my arrangement came from the King’s Singers in 2013, to form part of a Christmas album they were making jointly with the renowned German oboist Albrecht Mayer. With only minimal adaptation for the mixed-voice choral forces of The Cambridge Singers, I have been delighted to record my arrangement—inspired by Bach’s extended chorale treatments—with the equally peerless Royal Philharmonic Orchestra oboist John Roberts.

I sing of a maiden
This tender, lyrical fifteenth-century poem on the theme of the Virgin Mary and the coming of Christ has been set to music by many composers. I made a setting for solo voice back in the 1970s that I laid aside, only rediscovering it while clearing my attic in 2020. I decided to rewrite it and revoice it for mixed choir, in which form it is recorded here. The new version is dedicated to Nathan and Marilyn Hayward, generous supporters of music in the United States and in Britain.

Joseph's carol
In 2020, at the height of the Covid pandemic, I was asked by Marios Papadopoulos—founder and conductor of the Oxford Philharmonic Orchestra—to compose a new carol as part of a filmed Christmas tribute to the Oxford vaccine team. In addition to the orchestra, we had at our disposal the choir of Merton College, and Sir Bryn Terfel as star soloist. I immediately pictured him in the role of the steadfast Joseph, and Joseph’s carol is written from his point of view: a weary traveller on his way to Bethlehem with Mary, his doubts and fears turned to awe and wonder as he hears angel voices foretelling the miracle to come.

Christ our Emmanuel
Harpists may recognize this carol as an instrumental piece called Lullaby for Ana Gwen, which I wrote specially for an album project with the renowned harpist Catrin Finch in 2012. It caught the attention of my German choral conductor friend Nicol Matt, who told me ‘you should make a Christmas carol out of that piece’ … so I did.

Suzi's carol
Suzi Digby, choral conductor extraordinaire, has been a major force for good in the choral world (and beyond) for a number of years, and is a personal friend. Among her many projects—some involving her fabulous chamber choir ORA—she has commissioned a wealth of new choral music from a remarkable cross- section of composers. I feel privileged to have been invited in 2017 to be one of them, and at her suggestion I decided to write a carol, with her expert choir in mind. I always return to early English carol texts with pleasure, but in choosing A babe is born all of a may I preferred to avoid such a lengthy title, so Suzi’s carol it is, in recognition of her huge contribution to the world of choral music.