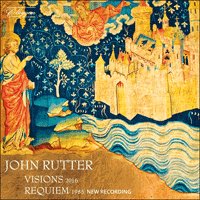 This new album couples John Rutter's most recent work with one of his most popular. Visions celebrates the utopian ideal of heavenly peace in in four movements written specially for the solo violin of Kerson Leong, string ensemble and the boy choristers of the Temple Church choir. The Requiem of 1985 receives a vital new recording under the guidance of its composer. 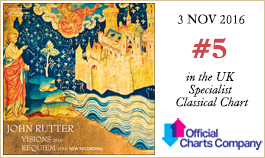 '[This] coupling is a new recording of the Requiem Rutter first took into the studio 30 years ago. Although his timings for individual movements haven't altered a jot across the decades, the new version is preferable—the recording has greater clarity and amplitude, and both the singing and playing have a touch more incisiveness and assurance' (BBC Music Magazine)» More

Visions was the result of a most unusual invitation: to write a piece combining solo violin, string ensemble (to which I added a harp), and the boy choristers of the Temple Church choir. The occasion was a concert at the Temple Church in London forming part of the 2016 Menuhin Competition, at which two past winners of that renowned violin competition were to perform. My assigned soloist was the dazzling 19-year-old Canadian violinist Kerson Leong. Having immediately decided to accept, my thoughts soon turned to the historic associations of the Temple Church with the Knights Templar—the church takes its name from the Temple at Jerusalem, and the round shape of its most ancient part is a deliberate echo of the Church of the Holy Sepulchre. ‘Jerusalem’ is of course more than the name of a middle-eastern city: it stands as a symbol both of God’s people and of a utopian ideal of heavenly peace and seraphic bliss in store for redeemed humanity.

I chose four biblical texts which express different aspects of this vision—(1) an introductory description of the imagined city in the words and Gregorian melody of a medieval hymn familiar in the English version beginning ‘Blessed city, heavenly Salem’; (2) Isaiah’s prophetic vision of the coming of Messiah, followed by a lively section which might be a dance of the daughters of Jerusalem; (3) a lament for the desolation of Sion, using a transmuted fragment of both text and melody line from William Byrd’s anthem Bow thine ear, O Lord; and (4), a beatific vision of the holy city as seen by St John in the Book of Revelation.

Requiem was composed in 1985 and first performed in the United States by the church choir of my musical patron and friend Mel Olson. It was not the result of any commission, but simply something which sprang from studying the manuscript of the Fauré Requiem in Paris (could I too write a Requiem?)—and which was spurred on by a wish to remember in music my late father, who had died in the previous year.

Following the precedent established by Brahms and Fauré, among others, it is not a complete setting of the Missa pro defunctis as laid down in Catholic liturgy, but instead is made up of a personal selection of texts, some taken from the Requiem Mass and some from the 1662 Book of Common Prayer. The seven sections of the work form an arch-like meditation on themes of life and death: the first and last movements are prayers to God the Father on behalf of all humanity, movements two and six are psalms, movements three and five are personal prayers to Christ, and the central Sanctus is an affirmation of divine glory, accompanied by bells as is customary at this point in the Mass. Gregorian chant is used, in fragmentary or disguised form, at several points in the work. Each of the two psalm settings has an instrumental obbligato, a feature inherited from Bach.

In style and scale, Requiem owes more to Fauré and Duruflé than to Berlioz, Verdi or Britten. It is intimate rather than grand, mostly contemplative and lyric rather than dramatic, consolatory rather than grim, approachable rather than exclusive. Would I write the same sort of Requiem today? Perhaps not, but it was what I meant at the time I wrote it, and unlike other genres of composition, a Requiem is something you only write once.

During two busy but blissful days in July this year I had the opportunity to record, side by side, my most recent work Visions (for the first time) and my 30-year-old Requiem (for the second time). The suggestion came from an old friend, Barry Holden—these days a very senior executive for another record label but a supportive and collegial choral music enthusiast—and it was a logistical feat to make the idea a reality. I was determined that the violin soloist in Visions should be Kerson Leong from Canada, the young Menuhin Competition prizewinner for whom I had written the work and who had given the first performance at the Temple Church in London in April. The earliest date he could be in London for the recording was 16 July—but the latest date that the Temple Church Boys’ Choir, also essential for the recording, could be available was also 16 July, since they were due to leave for a tour of Singapore and Australia on 17 July. Schedules had to be juggled to ensure the availability of Aurora Orchestra (the young award-winning chamber orchestra who were my first choice), our producer Raphaël Mouterde, plus myself and the acoustically lovely All Hallows Church, my preferred venue—but somehow it all came together, and this album is the result.

The reason for recording Visions was fairly obvious: to give its original soloist and choir a chance to capture their performance in a more permanent form than the fleeting première—but why re-record Requiem when I had already recorded it soon after it was written in 1985? Truth to tell, the original recording, although in its time a valuable ambassador for what was then a new work, was beginning to show its age—as digital technology has advanced over thirty years, new high-resolution formats are expected. I also felt it would be interesting to give a new generation of the Cambridge Singers—most of whom were not born at the time of the original recording—an opportunity to see what they could do with what is now a familiar choral work. I have not listened to the original recording for many years, so I must leave comparisons to others, but I can say that the pleasure of being able to record the music twice in a lifetime was real, and equal on both occasions.