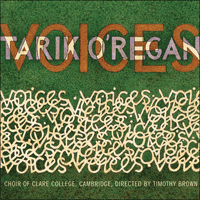 Voices, a collection of 14 premiere recordings, ushers in a major new talent, Tarik O'Regan, one of the most exciting choral composers to emerge in years. His music is tonal although edgy and definably contemporary.

'Whatever the future course of O’Regan’s career, he will be able to look back on this debut album with well merited satisfaction' (Gramophone)

Voices, a collection including thirteen première recordings, forms a corpus of work composed over six years. Looking back to the earliest of these pieces, Locus iste, the idea of writing for choir seemed quite a novelty to me, an occasion which I thought I might never get the opportunity to repeat. I was aware that much contemporary choral music sat easily, but often exclusively, within the confines of liturgy or surrounded by the walls of a concert hall. Although transcending the mutual limitations of both environments in one work was a challenging goal, the struggle heralded a stylistic transition and came to define much of my output. That attitudinal shift, back then, is echoed in the most recent composition heard here, Dorchester Canticles, marking the onset of a new phase; it was begun in Oxford and completed shortly after I moved to New York, a city renowned for its own plurality of voices.

Three Motets from Sequence for St Wulfstan
The three motets which open this recording are taken from a collection of compositions which form part of an ongoing project called Sequence for St Wulfstan. Each work in the Sequence (currently comprising six individual a cappella settings) is conceived to be performed alone or in the company of any number of its siblings. The text of each motet is taken from the 723-page Portiforium of St Wulfstan, an eleventh-century liturgical almanac housed as Manuscript 391 in the Parker Library at Corpus Christi College, Cambridge. The Portiforium carries the name of the then Bishop of Worcester, St Wulfstan, who likely commissioned his scribes to copy and collate the volume in 1065.

Beatus auctor saeculi, a gentle carol with its intertwining opening melody for upper-voices only, lilts throughout between dense chordal writing and moments of sparse openness. It was first performed in December 2003 at the Spitalfields Winter Festival in Shoreditch Church by the Choir of Clare College, conducted by Timothy Brown by whom the work was commissioned. I specifically chose to set only two of the eight extant stanzas in the manuscript as I was aware that these were the most ecumenical in their reading, referring in metaphor only to a ‘blest author’.

O vera digna hostia was the first work in the Sequence to be completed, the result of a commission by The Vaulkhard Choral Trust for the Choir Schools’ Association. In many ways this piece, first performed in Winchester Cathedral in May 2003 by Winchester Cathedral Choir directed by Andrew Lumsden, laid the stylistic foundation upon which the remaining motets have been built. With its modality rooted in that of Balinese gamelan, this Eastertide motet is mainly reliant on interlaced, repetitive rhythmic patterns for its momentum.

Tu claustra stirpe regia was composed to celebrate the accession of Her Majesty the Queen, Elizabeth II, to the position of Patroness of Queens’ College, Cambridge, receiving its première by the College Choir under the direction of Samuel Hayes in June 2003. Using only two verses of the seven-stanza Ambrosian hymn Nunc tibi, virgo virginum, this Marian text links liturgy with the regal theme of the commission (‘O Thou, from regal ancestry’).

Magnificat & Nunc dimittis
The Magnificat and Nunc dimittis were both commissioned, separately, by Timothy Brown for the Choir of Clare College, Cambridge. The former was premièred at the 2000 Spitalfields Winter Festival in London, while the latter was composed for a BBC broadcast in 2001. Both are large-scale settings, designed to stand as concert works in their own right or to be paired together for liturgical purposes. The work is scored for double choir with soprano, alto, tenor and bass soloists and a solo cello. The dedicatee, Christopher Rutter, who sang in the first performance of the Magnificat, had his life tragically cut short in a road accident three months later, shortly before the Nunc dimittis was due to have been premièred. In each movement I have tried to recreate the Renaissance practice of alternating chant and polyphony, the latter developing texturally, rather than harmonically (herein lying the ‘variations’ of the subtitle). The cello uses material from both choirs, accompanying, rising above and playing against the ongoing variations, but always reverting to fragments, if not entire quotations, of the chant melody.

Bring rest, sweet dreaming child takes its title from the first stanza of a poem by the Anglican priest-poet, Mark Pryce, which, in his own words, ‘reflects on the birth of the Christ-child who comes into the anxiety, noise and loneliness of the contemporary city, with its varied threats and fear of neighbour.’ Originally written in 2003 for Midnight Mass in the heart of the city, there is an ecumenical sentiment of stillness that pervades the poem; something which I have tried to bring out in my musical setting, commissioned by the Elysian Singers of London and first performed by them in December 2004 in St Paul’s Church, Covent Garden. Scored here in a version for upper-voice choir, the words are sparsely accompanied by a solo harp. I have deliberately avoided the more conventional use of the instrument, thus there are no glissandi and it does not double the vocal line; instead it casts a soft light, quietly highlighting particular resonances. Each verse, based on the opening monody, is altered and extended very slightly until we see a window upon the inherent radiance of the words.

The primary material in Columba aspexit is taken from the sequence of the same name ascribed to Hildegard von Bingen (1089–1178). By shifting tonal centre several times, the work plays on the modal ambiguity of the original sequence with its contrasting B flats and B naturals. The text utilised here, merely the first verse of nine, is not as peaceful in intent as may be first assumed from the translation of the title, ‘the dove peered in’. Hildegard uses the dove as a symbol of the Holy Ghost, hovering in the presence of St Maximin, a celebrant at Mass. The music develops at a flighty pace from the quiet quotation of the opening phrase. Columba aspexit was first performed in December 2000 by The Hildegard Choir of Oxford, conducted by Lucy Haigh.

Dorchester Canticles
Commissioned by the Bournemouth Sinfonietta Choir, Dorchester Canticles was first performed in St Mary’s Church, Dorchester (Dorset) in a May 2004 concert conducted by David Gostick. Although the two movements share some musical material, each is conceived as an independent entity and can be performed separately. The optional harp and percussion, heard here, are written with concert performances in mind (primarily for partnering the unusual reduced-orchestration version of Leonard Bernstein’s Chichester Psalms). This incarnation of the Cantate Domino grew organically from an earlier 2002 setting for Queens’ College, Cambridge, written in response to a commission to celebrate the restoration of the College’s historic 1892 Binns organ. I was mid-way through completing this work, when I moved to New York from the UK in March 2004. There is a sense that the fast toccata that closes the Deus misereatur, being the first thing I wrote in my new environs, owes more to Manhattan’s rhythm than Dorchester’s.

The final four choral pieces on this recording are the earliest to be composed. Gratias tibi was premièred in a BBC broadcast performance by the Choir of New College, Oxford directed by Edward Higginbottom in June 2000. This motet, for divided choir, takes for its text the final two sentences of St Augustine’s Confessions (book I). Written in the final years of the fourth century, the Confessions reflect on St Augustine’s own life and, more importantly, the autobiographical evolution of thought. The music explores St Augustine’s dual emotions of praise and recollection by using two constantly shifting modalities which only unify in their evaporation at the very end.

Ave Maria, also scored for divided choir, was joint winner of the Concours Européen pour Chœurs et Maîtrises de Cathédrales 1999. Underpinned with a taut, tripartite motivic construction, I have tried to use sparingly the richness available with a divided chorus to give the work an air of sensitive restraint.

Written in 1999, Care charminge sleepe is the only piece on this album scored for double choir. As the protagonist of John Fletcher’s 1614 stage work, Valentinian III, lies poisoned on stage, a song is performed (originally composed for lute and voice by Fletcher’s contemporary, Robert Johnson) luring him to sleep, the ‘easer of all woes’. Without wishing to allude to Johnson’s music in any way, I was interested in emphasizing the juxtaposition of Valentinian’s violent death and the peaceful beauty of Fletcher’s words. The opening section, fanning out from a single pitch, leads into a quasi-fugal passage before returning again in a higher, more urgent tessitura as the moment of death occurs (‘kiss him into slumbers like a bride’). This work represents my first collaboration with the Choir of Clare College, Cambridge.

Locus iste, a simple four-part setting, is the earliest composition on this disc, dating from 1998. The melody here forms the basis of the canonic section at the heart of Care charminge sleepe.

Colimaçon
The title is French for the spiral form of a snail’s shell and is most commonly found in the form escalier en colimaçon, meaning a spiral staircase. Having first come across the expression in the work of Jacques Prévert, the word obviously remained in my subconscious and I was reminded of its meaning when composing Colimaçon for David Titterington in 1999, with its meandering circular form. Gratias tibi evolved as a choral ‘transcription’ of this work at a later date, the voice of the organ fragmented into a multitude of its human counterparts.