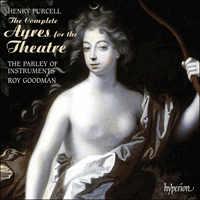 The Complete Ayres for the Theatre

‘Ayres for the Theatre is a wonderful collection of rich and varied, tuneful music and has been marvellously well recorded by engineer Tony Faulkner … the players set out in almost holographic detail between, beyond, between and in front of the loudspeakers. You could almost be there’ (Gramophone)
‘Highly enjoyable!’ (Early Music Review)
‘Strongly recommended’ (Fanfare, USA)
‘The Parley of Instruments up to their usual stellar form’ (Stereophile)
«Goodman pilote sa troupe avec une science, une fraîcheur, une addresse, une élégance, qui signale le parfait purcellien» (Diapason, France)

When Henry Purcell died suddenly on 21 November 1695 he left a good deal of unpublished music. The music publishing industry was still relatively undeveloped in England during his lifetime and by and large only those pieces that could easily be performed in the home—songs, catches, trio sonatas and keyboard pieces—got into print. In fact, Purcell’s death stimulated a burst of unprecedented activity: his keyboard suites were published in A Choice Collection of Lessons for the Harpsichord or Spinnet (1696), a second set of trio sonatas was issued as Ten Sonata’s in Four Parts (1697), one of his most popular concerted works, the Te Deum and Jubilate in D major, was published in score in 1697, and a large collection of his songs appeared in the two volumes of Orpheus Britannicus (1698 and 1706).

The most unexpected of these memorial volumes was A Collection of Ayres, Compos’d for the Theatre, and upon other Occasions (1697). Ayres for the Theatre, as it was known for short, was the first printed collection devoted entirely to the incidental music used in the London theatres. It marked the point at which this repertory, hitherto largely confined to theatrical circles, was taken up in public concerts and in the home, and it was the model for a series of more than fifty theatre suites published by Walsh and Hare in the first decade of the eighteenth century. The four part-books of Ayres for the Theatre contain thirteen suites written by Purcell for the London theatres between June 1690 (Dioclesian) and the autumn of 1695 (Bonduca). Despite the mention of ‘other occasions’, the collection only seems to contain theatre music, and it includes all his known theatre suites: the ones for The Double Marriage, Timon of Athens and The Rival Sisters, included in earlier lists of Purcell’s works, are now thought to be by Louis Grabu, James Paisible and John Ridgley.

Ayres for the Theatre does not present the suites as they would have been heard in the theatre. Originally, the overtures would have come half-way through the sequences of movements, between the movements that warned the audience that the play was about to begin (the ‘first music’ and the ‘second music’), and those that marked the division of the play into acts (the ‘act tunes’). It is unlikely that the composer was responsible for devising their present order, but by and large the job was done with skill and discrimination. The editor (possibly the composer’s younger brother Daniel) was evidently concerned to vary the mood while preserving satisfactory key relationships; the movements of theatre suites were usually written in several keys, for they were not originally heard in a continuous sequence, and traditional key associations were sometimes used to reflect the changing moods of the parent plays. Nevertheless, there is little sign that Purcell tried to convey the mood of the play in his suites beyond a tendency to preface tragedies such as Abdelazar and Distress’d Innocence with overtures in the minor, though Curtis Price has argued that the Bonduca overture prefigures the defeat of the heroine (Boadicea or Boudicca to us) at the hands of the Romans by turning from a lively C major fugue to a wild chromatic close in C minor.

In the suites for Purcell’s semi-operas, Dioclesian, King Arthur, The Fairy Queen and The Indian Queen, the editor did not restrict himself to the incidental music but also made use of some of the theatrical dances and ‘song tunes’, the instrumental versions of vocal numbers. In some cases it is not clear whether the latter were used in the original productions as preludes or ritornelli, or were devised later and included in the suites as ‘hit songs’ from the show. But it is clear that the four-part song tunes were made by the composer, for they are beautifully conceived and often have piquant dissonances not present in the original two-part versions of the parent songs. However, Purcell’s semi-operas also presented the editor with a problem, since some of the best instrumental movements have obbligato wind parts that could not have been fitted into the collection without creating extra part-books. Some were left out but others, such as the overtures to The Fairy Queen and Bonduca, were printed without their trumpet parts; the Bonduca trumpet part only survives in a large manuscript of theatre suites in the library of Magdalene College, Cambridge, and is still unpublished.

The overtures to Purcell’s suites are mostly cast in the two-section form established by Lully and other French composers in the 1660s and ’70s. The first sections are propelled forward by strong dissonances and are mostly taken up with patterns of dotted notes, though those in the Abdelazar and Virtuous Wife overtures have interlocking patterns of semiquavers, while the ones in Distress’d Innocence and Amphitryon are closer in style to almands. The fugue in the Amphitryon overture is an example of a type common in French music: the subject consists of simple patterns of flowing quavers and enters in sequence from treble to bass. It is less complex than most of Purcell’s later fugues but is already organized like them with two ideas presented successively, the second arriving just as the ear tires of the first. Purcell preferred this pattern to the standard one of the eighteenth-century fugue, which alternates entries of the theme with freer episodes, presumably because it enabled him to expand the dimensions of his fugues without diluting their contrapuntal energy. He mostly followed French tradition by writing triple-time fugues, but the energetic duple-time one in Abdelazar, with its striding chromatic theme, would not be out of place in an Italian sonata.

The rest of the movements in Purcell’s suites are, if anything, less French than the overtures and do not conform to our expectation of what suites should contain. There are no examples of almands or corants, and only one saraband. There is no shortage of elegant minuets and minuet-like airs, but hornpipes are equally common, and throughout there is a preponderance of breezy, tuneful airs, some of which achieved the status of popular tunes. Surprisingly, the movement in Abdelazar that was best known in Purcell’s time was not the rondeau in hornpipe rhythm, made famous by Benjamin Britten, but the true hornpipe: it appeared in successive editions of The Dancing Master under the title of ‘The hole in the wall’, in company with hornpipes from Bonduca (‘Westminster Hall’) and Dioclesian (‘The siege of Limerick’). Nevertheless, there are also many beautiful, soulful airs, distinguished by Purcell’s unfailing ear for string sonority, and his acute harmonic invention. Sometimes, this leads Purcell to use strong dissonances that later copyists and editors took to be printing errors. Ayres for the Theatre has its fair share of wrong notes but wherever possible we have followed the readings it gives since it is the primary source for most of Purcell’s suites.

The aim of this recording is to present Ayres for the Theatre complete as a publication and to produce the effect of a concert performance of its suites under Purcell’s direction, or a member of his circle. We have used an orchestra of twenty-four strings for Dioclesian, the nominal size of the Twenty-four Violins at court, and a band half that size for the King Arthur, Fairy Queen and Indian Queen suites. Twelve seems to have been a common number for strings in the Restoration theatre, dating from the period in the 1660s and 1670s when the Twenty-four Violins served regularly in the two playhouses, divided into two for the purpose. Following well-established orchestral practice in England and France, we have allocated more instruments to the outer parts than to the inner ones and have used only 8' pitch instruments on the bass line—which is quite low enough as it stands in Purcell. We have also used oboes and bassoons in some of the movements of Dioclesian and King Arthur.

It is likely that the suites for the ordinary spoken plays would originally have been performed in a small gallery, without a keyboard instrument. They certainly work extremely well one-to-a-part and we have chosen to record them in this form, though they doubtless would also have been played by orchestras at the time. There is no continuo part in Ayres for the Theatre, nor any figures in the bass part. Nevertheless, keyboard instruments would have been present in the pit when plays with concerted vocal music were performed, and they probably would have been used in concert performances, so we have included them in this recording together with baroque guitars and theorbos.

At the end of the sequence of the thirteen suites we have included an appendix of pieces that, for one reason or another, did not get into Ayres for the Theatre. The wonderful symphony in Act III of The Indian Queen was presumably thought to be unusable without its trumpet part; similarly, the trumpet and timpani parts are essential to the ‘Sonata while the sun rises’ from The Fairy Queen, Act IV. Both are examples of the more Italianate form of overture that Purcell and his contemporaries turned to in the 1690s. The pieces from Timon of Athens and Sir Anthony Love were presumably left out of Ayres for the Theatre because Purcell did not write complete suites for the plays. James Paisible wrote the incidental music for Timon of Athens, and it is likely that the lost incidental music for Sir Anthony Love was also not by Purcell. The powerful ‘Curtain Tune on a Ground’ apparently duplicates the overture (overtures were often called ‘curtain tunes’ in Restoration England), but Curtis Price has argued that it is mislabelled and was actually played in Act IV, Scene 3 while Timon throws stones at his tormentors.

The G minor Overture Z626/1 is something of a puzzle. It survives only in a manuscript from about 1700 at the Royal College of Music in London, where it is labelled ‘Overture in Mr P Opera’. Edward Dent included it in the Purcell Society edition of The Tempest on the grounds that it was the only operatic work by Purcell without an overture. However, The Tempest music is now thought to be largely by John Weldon, and Curtis Price has proposed that it was actually written for the lost prologue of Dido and Aeneas. It certainly comes from the right period of Purcell’s career, and is in the right key: Price has argued that the Dido prologue must have been in G minor to complete the key scheme of the overall work.