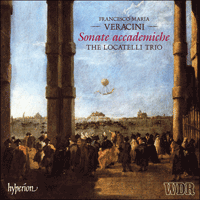 ‘The performances by the Locatelli Trio respond with spontaneity and expressive warmth to the wide-ranging effects, sometimes playful, at others sober and idiosyncratic of these fascinating pieces. Violinist Elizabeth Wallfisch articulates Veracini's melodic line with clarity and communicative charm … a welcome return to the catalogue’ (BBC Music Magazine)
‘Fascinatingly inventive works, showing their little-known composer as a great deal more than a historical figure. The recording is vividly real and immediate’ (The Penguin Guide to Compact Discs)
‘Clearly a must for collectors of Baroque music … this ambitious and beautifully realized set is certainly going to be met with the same enthusiasm as has their previous work’ (Fanfare, USA)
‘This is wonderfully lusty, celestial music, and it is thanks to Wallfisch that we hear both of these seldom associated qualities … this is a great musical treasure at a bargain price. Do not miss it’ (Positive Feedback)

Francesco Maria Veracini was born in Florence on 1 February 1690 into a family of musicians, and was taught by his uncle, the violinist and composer Antonio Veracini, among others. The young Francesco Maria worked in Florence until 1711 when he began to appear in Venice, and in 1714 he travelled north of the Alps for the first time, visiting London and Düsseldorf before eventually settling in Dresden. Veracini worked as a highly paid member of the Italian musical establishment at the Dresden court between 1717 and 1723, when he returned to his home city. Shortly before he left Dresden, on 13 August 1722, he threw himself from an upstairs window. Johann Mattheson claimed that the cause was a fit of madness brought on by excessive musical and alchemical studies, but Veracini suggested in later life that jealous colleagues had conspired to murder him. Be that as it may, Veracini survived and remained in Italy until 1733, when he once more travelled to London. He worked there on and off until 1745 when he returned to Italy for the last time; according to Charles Burney he was shipwrecked in the Channel, and lost his treasured Stainer violins ‘St Peter’ and ‘St Paul’. Veracini’s relatively uneventful last years were taken up with directing the music in two Florentine churches, and with writing a treatise, Il trionfo della practica musicale. He died in Florence on 31 October 1768.

Burney wrote that Veracini and Tartini were regarded by their contemporaries as ‘the greatest masters of their instrument that had ever appeared; and their abilities were not merely confined to the excellence of their performance, but extended to composition, in which they both manifested great genius and science’. He added that it was ‘impossible for any two men to be more dissimilar in disposition: … Tartini was so humble and timid, that he was never happy but in obscurity; while Veracini was so foolishly vainglorious as frequently to boast that there was but one God, and one Veracini’. Veracini certainly seems to have been arrogant and eccentric, but Burney, who heard him play in London shortly before he left for the last time, realized that ‘he built his freaks on a good foundation, being an excellent contrapuntist: … the peculiarities in his performance were his bow-hand, his shake, his learned arpeggios, and a tone so loud and clear, that it could be distinctly heard through the most numerous band of a church or theatre’.

We have four complete sets of solo violin sonatas by Veracini, two of which were published in his lifetime. The first two, the twelve Sonate a Violino, o Flauto solo, e Basso in a Dresden manuscript, and the twelve Sonate a violino solo, e basso, Op 1 (Dresden, 1721), are relatively simple, and may have been partly composed before he left Italy. The same may be true of the manuscript set of Dissertazioni that Veracini based on Corelli’s Op 5. It has conventionally been thought that these radical recompositions of Corelli’s famous sonatas were an act of homage, but John Walter Hill has argued that they ‘imply a criticism of the original, not a homage’, which makes sense in view of Veracini’s reputation for ‘foolishly vainglorious’ behaviour. Veracini’s last set of sonatas, the twelve Sonate accademiche Op 2, was published by the author in 1744, and was sold in Florence as well as London. They are dedicated to Augustus III, the Elector of Saxony, possibly in hope of a renewed appointment at the Dresden court. The description ‘accademiche’ probably means that Veracini thought them suitable for performance in an accademia di musica or private concert, though they are also unusually ‘academic’ for solo violin sonatas, with a number of elaborately contrapuntal capriccio movements.

Part of the reason that Veracini was regarded as eccentric by his contemporaries was that he was exceptionally conservative as a player and as a composer. The loud, clear tone mentioned by Burney would have been thought old-fashioned in the 1730s and ’40s, when a refined tone with careful dynamic shading was becoming fashionable. To judge from his music, his technique was closer to late seventeenth-century German violinists such as Biber and Walther than his Italian contemporaries. Veracini’s sonatas are taken up largely with double stops and rapid passagework. High positions are used, but not to the same extent as in the sonatas and concertos of his pupil Locatelli, and never to project cantabile lines—as in galant violin music.

Similarly, Veracini’s musical style mostly looks backwards rather than forwards. His sonatas tend to be in four or five movements rather than the more modern two or three, and freely mix dance movements in a number of styles with ‘abstract’ movements, in the manner of mid-seventeenth-century sonatas. In this respect, they are more old-fashioned even than Corelli’s Op 5 sonatas, which divide into da chiesa and da camera sets. Mention has already been made of the contrapuntal capriccio movements; these often discuss and combine two or three subjects, and the last sonata combines variations on the early seventeenth-century passacaglia and ciaccona ground basses. It was not uncommon at the time for Italian composers to end a set of sonatas with a traditional ground bass—witness Corelli’s Op 5 No 12, the variations on ‘La Folia’. The passacaglia was properly a set of variations in the minor on four notes descending from tonic to dominant by diatonic or chromatic steps, while the ciaccona traditionally outlined a cadential progression in the major, though composers had begun to confuse them even before the end of the seventeenth century. Veracini must have been by far the youngest composer to identify them correctly.

To some extent, Veracini seems to have treated his Sonate accademiche as an autobiographical record of his life as travelling virtuoso. One of the movements, the Menuet in Sonata No 4, is dated 1711 in the edition, while Sonata No 2 clearly recalls his time at Dresden, for it begins with a Polonese (the electors of Saxony were also kings of Poland), and also includes an Aria schiavona or ‘Slavonic air’. Sonatas Nos 3, 8 and 10 have movements entitled Ritornello that use the idiom of the operatic aria and seem to reflect Veracini’s experience as an opera composer. Two movements, the Cotillion of Sonata No 4 and the Scozzesse of Sonata No 9, seem to reflect his time in England. The Cotillion was a lively ballroom dance, particularly popular in England (though Veracini’s movement is contrapuntal rather than balletic), while his Scozzesse is a ornamented setting of the popular Scots tune ‘Tweedside’. Horace Mann, the British ambassador in Florence, heard Veracini play it there in May 1750 and wrote to Horace Walpole that: ‘Veracini shone much, and particularly in a sonata in which he brings in Tweed’s side, which he always plays when I am present.’ Indeed, by combining a conservative style with brilliant virtuosity, Veracini made his music particularly attractive to the English. An obituary in a Florentine newspaper remarked that ‘he acquired, especially beyond the mountains, a reputation as a player that no one, perhaps, has equalled’, and added that ‘in England he was applauded extraordinarily’. It is therefore particularly appropriate that this first complete recording is the work of an English group.