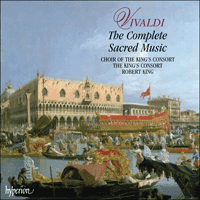 ‘For King's sterling service to the Vivaldian cause, one of his most important recording and satisfying projects to date, I am thankful’ (Gramophone)
‘If you're waiting for the perfect collection of Vivaldi's sacred music, this is it. It was a happy day when this beautiful boxed set arrived in my mailbox as one of those landmarks in the history of recorded music that are farther between than one might think’ (American Record Guide)
‘The series has been one of the most significant ventures in the Baroque firmament, rediscovering the Red Priest as a church composer both of searing intellect and burning convictions’ (Classic FM Magazine)
‘King has given us the ultimate Vivaldi anthology, abundant in energy, rich with emotion, animation, and color, and enshrined in Hyperion's fabled, warm, and incomparable sound’ (Fanfare, USA)

Near the end of his career, in 1739, Vivaldi once again supplied sacred vocal compositions to the Pietà during an interregnum between choirmasters – this time for payment, since he was no longer its employee. Five of these works are extant in complete form today. They exemplify very clearly Vivaldi’s turn, in his last years, to the fashionable galant style cultivated by younger Neapolitan composers, among them Vinci, Leo and Porpora.