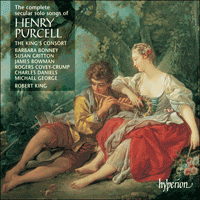 Cover artwork: Shepherd Piping to a Shepherdess (1747/50) by Francois Boucher (1703-1770)
Reproduced by permission of The Wallace Collection, London / Bridgeman Images

Among all his remarkable and varied compositional talents, Purcell was the supreme craftsman when it came to setting his native language to music. Addison wrote of Purcell’s ‘Tunes so wonderfully adapted to his Words’ and Playford, in his introduction to the first volume of Orpheus Britannicus (1706) commented that ‘The Author’s extraordinary Tallent in all sorts of music, is sufficiently known; but he was particularly admir’d for his Vocal, having a peculiar Genius to express the Energy of English Words, whereby he mov’d the Passions as well as caused Admiration in all his Auditors’. Purcell combined an innate sense of the natural rhythms of speech and a wonderful melodic flair with a richness of harmonic language that few composers have ever matched.

For many of his commissions, Purcell had no choice of librettist. When he was required, as a royal employee, to set an ode or welcome song to music, a text would be supplied and Purcell was required to produce the goods: often he made a proverbial silk purse out of a sow’s ear. Sometimes it is much to the author’s benefit that anonymity has been bestowed on his second-rate, sycophantic efforts. In the forty plays for which he provided music, Purcell was presented with texts of all standards. The poet John Dryden summed up the contemporary attitude to such textual inadequacies with his 1697 paraphrase of Virgil: ‘The tune I still retain, but not the words’. The literary world had, however, survived Cromwell’s reign better than the musical community, and composers in the last three decades of the seventeenth century who were free to choose their own text were able to select from a wide range of contemporary and older material. When presented with fine poetry whose emotional content or subject matter inspired him, Purcell’s musical response could be devastating.

Songs enjoyed a wider audience than any other musical form: they were performed by professional musicians for royal entertainment at court, sung by amateur musicians at home, or simply heard in the streets. Pepys’s diary is full of references to performances by amateur musicians, and the music historian Sir John Hawkins tells an amusing story which, whether true or not, gives an idea of the difficulties of working for royalty. Demanding musical entertainment one day, Queen Mary sent for the soprano Mrs Hunt, the bass John Gostling and Purcell. They performed several of Purcell’s songs, but the Queen was not satisfied with such sophisticated music, eventually requesting that Mrs Hunt sing the Scots ballad ‘Cold and Raw’. Mrs Hunt complied, and accompanied herself on the lute. Purcell meantime sat at the harpsichord ‘unemployed and not a little nettled at the queen’s preference for a vulgar ballad to his music’. His tongue-in-cheek response was to include the melody in a section of his next birthday ode, Love’s Goddess sure was blind.

Almost all of Purcell’s eighty-five secular solo songs are fine works. A good number are masterpieces. Predictably, the majority present wistful or sad sentiments, and Purcell produces ravishing music. The variety of styles and forms is astonishing, ranging from songs whose influence can be traced back to the Elizabethan strophic lute-song, through highly charged works created from florid semi-recitative, to songs on ground basses and substantial Italianate cantatas. This set does not include any of the 150 songs – nor the wonderful instrumental music – that were written by Purcell for the stage. Similarly, a number of songs now thought to have been misattributed to Purcell are also omitted. Everywhere in the eighty-seven songs presented in this series variety abounds, and everywhere shines the brilliant inventiveness of a unique composer of whom Roger North said: ‘A greater musical genius England never had’.

The song texts
To an educated seventeenth-century listener, Purcell’s song texts were full of subtle references. A twentieth-century listener who may lack a detailed classical education can miss much of this undercurrent. To comment on every angle and allusion in Purcell’s songs would fill a book. Instead, in the song commentaries, a few points are exemplified and expanded. Grateful thanks are due to Dr Richard Luckett, Pepys Librarian at Magdalene College, Cambridge, for sharing, in his typically generous fashion, his huge and scholarly knowledge of Restoration literature and poetry. He writes:

It is all too easy to miss the point of Restoration song-texts. Some, of course, are feeble, invoking pastoral names unthinkingly and reorganizing stock material to no apparent purpose. Others use classical names with a great deal of point, often recalling specific poems by Anacreon, Theocritus, Catullus, Propertius and Horace. They are not remarkable for imagery or vocabulary, which is why they respond well to setting. But they do explore all kinds of complexities and ironies of amatory experience, albeit by means of small variations on a limited number of themes. And they repeatedly conjure up that small but significant body of Greek and, on a much greater scale, Latin poetry which educated men of the age were likely to have known by heart.

Cover artwork: Shepherd Piping to a Shepherdess (1747/50) by Francois Boucher (1703-1770)
Reproduced by permission of The Wallace Collection, London / Bridgeman Images