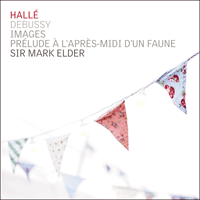 After the first performance of La mer in October 1905 Debussy spent no fewer than seven years wrestling with what were to become the three Images for orchestra: ‘Gigues’, ‘Ibéria’ (which is itself divided into three movements) and ‘Rondes de printemps’. As early as July 1906 he told his publisher that ‘if an ironical fate doesn’t come and jumble up my manuscripts, I should have “Ibéria” finished next week’. Fate, in the usual form of second and third thoughts, did indeed intervene and the score of this central panel of the triptych finally bore the date 25 December 1908. He finished ‘Rondes de printemps’ in May 1909, ‘Gigues’ in October 1912, and the complete Images were first performed on 26 January 1913 under the composer’s baton. Some critics were puzzled by the work and decided that Debussy’s talent had run its course. They were answered by a splendidly combative article from Ravel, accusing the malcontents of ‘slowly closing their eyelids before the rising sun amid loud protestations that night is falling’.

‘Gigues’—the first of the three Images, although the last to be completed—originally bore the title ‘Gigues tristes’ (Sad Jigs). British audiences probably hear it differently from anyone else, as the piece contains snatches of the Northumbrian tune ‘The Keel Row’, in a secondary role as foil to a haunting lament on oboe d’amore (an instrument Debussy used nowhere else); and they are no more than snatches—we never hear the tune complete, the nearest being a xylophone version leading up to the main climax, but stopping short of the last four notes of the final cadence. The composer’s compositional mastery is nowhere more apparent than in the way he explodes the climax into scattered fragments before returning us to the C natural with which the piece began.

The earliest form of ‘Ibéria’ was as a work for two pianos, but Debussy seems to have realised quite soon that his ideas called for orchestral colouring. He was keen to get away from anything that could be dubbed ‘Impressionism’ (a term he never liked) and certainly from any reruns of La mer or Pelléas et Mélisande. So it is that the opening of ‘Par les rues et par les chemins’ (Through the Streets and Lanes), the first movement of ‘Ibéria’, has an impact and stridency new in Debussy’s music. This opening and much of what follows validate the composer’s claim to be dealing in ‘realities’ and, at the first rehearsals under Gabriel Pierné in 1910, he was pleased with the way it was eventually coming to life, ‘with people and things waking up … there’s a man selling watermelons and urchins whistling, I can see them quite clearly.’ More than that, he was happy with the naturalness of the transition between the second movement, ‘Les parfums de la nuit’ (Night Scents)—a masterpiece of pre-Hollywood lushness—and the vigorous clarity of the final ‘Le matin d’un jour de fête’ (On the Morning of a Fiesta): ‘it sounds as though it’s improvised’.

Like ‘Gigues’, and unlike ‘Ibéria’, ‘Rondes de printemps’ (Spring Dances) begins with a single note, but here made to shimmer with tremolandos and harmonics. ‘The thing about this piece’, wrote Debussy, ‘is that it is immaterial and that, as a result, one cannot treat it like a robust symphony, marching along on its four feet (or sometimes three, but marching anyway).’ The epigraph on the score, ‘Welcome May and its woodland banner’, comes from a French book on Dante and is a translation of lines from a canzona by the 15th-century Italian writer Politian. Other evidence, though, suggests that Debussy also had in mind lines by Cavalcanti: ‘Because I think not ever to return … to Tuscany’. This may be the link with the French folk song ‘Nous n’irons plus au bois’ (‘We’ll to the woods no more’), which Debussy here uses for the fourth and last time in his music and gives, after any number of fragmented pre-echoes, as a long line to solo clarinet, marked ‘doux et expressif (en dehors)’—‘sweetly and expressively (to the fore)’. So perhaps not too much should be made of the Frenchness of this movement, as against the Britishness of ‘Gigues’ and the Spanishness of ‘Ibéria’, and rather more of the sense of loss and alienation that rises fitfully through the immateriality of Debussy’s orchestra.

Stéphane Mallarmé wrote his original version of L’après-midi d’un faune (‘The Afternoon of a Faun’) in June 1865, calling it ‘a heroic intermezzo whose hero is a faun’. He had in mind a dramatic production—this first version ran to nearly 400 lines in three scenes—but failed to find a producer. The text we know, reduced to 110 lines, was published in 1876 with four woodcuts by Manet, and again in 1887 in the Symbolist journal La revue indépendante. This undoubtedly was where Debussy first read it.

He and Mallarmé shared tastes in literature—Baudelaire, Poe, Banville—and it was the publication in 1889 of Debussy’s Cinq poèmes de Charles Baudelaire that brought him to Mallarmé’s notice. He was impressed, and asked a mutual friend, ‘Do you think Debussy would write music for my poem?’ The next week Debussy was taken to Mallarmé’s famous Tuesday gathering. Plans in 1891 for a recitation of the poem with his music came to nothing, and Debussy lamented to a friend in a letter of 1893: ‘Here I am, already 31, still not sure of where I’m going and still with things to learn (like how to write masterpieces …)’. But after the first performance on 22 December 1894 Mallarmé wrote to Debussy, deeply moved ‘that your illustration of L’après-midi d’un faune should present no dissonance with my text, other than to venture further, truly, into nostalgia and light, with finesse, with uneasiness, with generosity …’

The poem charts the progress of the Faun’s erotic fantasies in the afternoon heat. Though Debussy insisted that his work gave only ‘a general impression’ of the poem, he admitted to a correspondence between the last five bars and the last line—‘Couple, adieu; je vais voir l’ombre que tu devins’ (‘Couple, farewell! I go to see the shadow you became’). The opening flute solo may credibly be related to a line in the middle of the poem, ‘Une sonore, vaine et monotone ligne’ (‘A sonorous, empty and monotonous line’): ‘sonore’ because the opening C sharp on the flute, although the instrument’s open note, was always naturally out of tune on French flutes of the period, and rectifying this produced a peculiarly veiled and distant colouring; ‘vaine et monotone’ because of the repetition of the opening phrase and the feeling, common to the whole piece and indeed to much of Debussy’s music, that movement from one idea to another is dictated not by stern logic but merely by a passing whim—‘mon plaisir’, as he once called it.

As to the music’s stature, we may choose for ourselves between Saint-Saëns’s pontification that it ‘contains not the slightest musical idea in the true sense of the word’ and Pierre Boulez’s claim that ‘modern music was awoken by it’.

The two pieces that make up this disc belong to those years when Debussy was mulling over the orchestral Images. ‘Et la lune descend sur le temple qui fut’ (And the moon descends over the temple that was), the second piece in the second set of piano Images of 1907, leads on from ‘Pagodes’ (Pagodas) in the earlier set of Estampes (‘Prints’) in its exploitation, not so much of oriental sounds such as those of the gamelan (though these are certainly present) as of an oriental stillness and stasis. The first chord belongs, in the Western tradition, as part of a 16th-century cadence, achieved through part-writing. Debussy gives it a quite new feeling by treating it as a sound in itself, containing no clear forward impetus. Following on from his orchestration of all 24 Préludes for the Hallé, Colin Matthews has orchestrated both sets of piano Images. This is the first to be recorded from the second set.

The waltz for piano La plus que lente (‘The Slower than Slow’) of 1910 seems to have been inspired by a fiddler at the New Carlton Hotel in Paris, a Signor Leoni, to whom Debussy gave the autograph score. But he was unhappy with the trombone, timpani and triangle used by an arranger and so made his own more delicate version for flute, clarinet, piano, strings and cimbalom, which plays a short introduction. It is marked ‘Molto rubato, con morbidezza’ (Rhythmically very free, with tenderness), a feeling of slight unease furthered by the constantly changing tempo. The piece, nonetheless, shows Debussy at his most unchallenging and delightful.