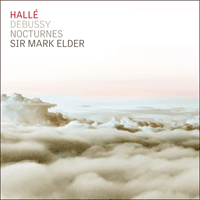 An evocative all-Debussy programme—from a team whose affinity to the composer is undisputed—which includes a fascinating first recording.

In their final form, the three Nocturnes date from 1897-9, but it is at least possible that Debussy began them in 1892-3, concurrently with the Prélude à l’après-midi d’un faune. In a letter of September 1892 he announced he was working on Trois Scènes au crépuscule (‘Three Twilight Scenes’); exactly two years later he told the violinist Eugène Ysaÿe that he was writing for him three Nocturnes for violin and orchestra. The connections between these and the Nocturnes we know today remain obscure, as to some extent do the sources of Debussy’s inspiration. He did write brief descriptions of what the three Nocturnes were supposed to represent but, given his general reluctance to commit himself on such topics, we should perhaps not take his remarks as gospel. Of ‘Nuages’ (Clouds), the first of the three pieces, he said that it depicts ‘the slow, melancholy procession of the clouds, ending in a grey agony gently tinged with white’. Nowhere in this description does he suggest that this scene takes place in darkness, but elsewhere he claims to have been on the Pont de Solférino ‘very late at night. Total silence. The Seine without a ripple, like a tarnished mirror.’ According to a third report, the horn call near the start is really a barge’s hooter.

The predominant sound in ‘Nuages’ is of a background of much-divided strings against which oboe and horns intone essentially non-developing lines. Flute, harp and a solo violin provide the middle section with something more like a traditional theme, so that the overall shape is of coalescence followed by disintegration. This is also the shape of the second piece, ‘Fêtes’ (Festivities), as articulated by the arrival and departure of the brass band (unambiguously identified by Debussy as that of the Garde républicaine). The sense of the lonely observer of mankind and nature, as in Berlioz’s Harold in Italy, is strong throughout these three pieces, and in the last, ‘Sirènes’ (Sirens), it is tempting for the listener to imagine the sirens singing to him alone. Being daughters of nature, they have not learnt how to develop their song on classical, academic principles and are content to work their magic through gently varied repetition; so it is no surprise to find Ravel, that master of monotony, declaring ‘Sirènes’ to be the finest movement of the three.

Although Debussy never wanted a teaching post, he retained a relationship with the Paris Conservatoire and in 1910 wrote a test piece for the clarinet competitions held that summer, for which he also sat on the jury. The Première rapsodie still taxes solo clarinettists, one professional performer claiming it takes artists to all those places they don’t want to go. The soloist has also to express widely differing emotions, ranging from the dreamy legato of the opening through the succeeding playful chromaticisms, reminiscent of the piano piece ‘Poissons d’or’ (Goldfish) from Debussy’s second book of Images; and all the time managing breath control and tempo—in less than 10 minutes, the piece goes through around 20 different tempi.

As a young man with no great family money behind him, Debussy had eked out a living by giving piano lessons (he was, it seems, not the most patient of teachers), making arrangements for publishers (mostly piano-duet versions of music by Saint-Saëns, but also of The Flying Dutchman overture) and picking up any commissions he could. One of these came from the American diplomat Meredith Read, who served as consulgeneral for France and Algeria over the period of the Franco-Prussian War. Read was proud of his ancestry, which included the Earls of Ross in northern Scotland. In 1890 he supplied Debussy with what he thought was a family bagpipe tune, though recent research by the American scholar Marie Rolf has found that it was in fact called ‘Meggerny Castle’ and had no family associations. Debussy duly produced a Marche écossaise (‘Scottish March’), based on this tune, for piano duet. Read wasn’t keen on the result, and Debussy too later felt it wasn’t up to his usual standard. But at some point he made an orchestration of it, published in 1911; and, on hearing a rehearsal of this version in 1913, pronounced, ‘Mais, c’est joli!’ He himself then conducted it in Rome, Moscow and with the Royal Concertgebouw Orchestra in Amsterdam. He allotted the first hearing of the tune to oboe and muted trumpet, perhaps in imitation of the Breton small bagpipe called a binioù, since there is no evidence that he ever heard a Scottish one. The slow central section is Russian in flavour (in the early 1880s Debussy had spent two summers in Russia as pianist to Tchaikovsky’s patron Nadezhda von Meck), while the final fast one expands the rather short-winded piano version.

In November 2001 a hitherto unknown piano piece by Debussy came to light. The winter of 1916-17 was particularly severe and, because of the war, coal in Paris was in short supply. However, Debussy’s coal merchant, Monsieur Tronquin, managed to find some for the composer and, in return, was given the manuscript of a short piece aptly entitled Les soirs illuminés par l’ardeur du charbon (‘Evenings Lit by Burning Coals’)—aptly, not only for the obvious reason, but because the title is a line from Baudelaire’s poem ‘Le Balcon’, set by Debussy along with ‘Harmonie du soir’ in his Cinq poèmes de Charles Baudelaire. From this latter poem Debussy had extracted the line ‘Les sons et les parfums tournent dans l’air du soir’ (‘Sounds and scents swirl through the evening air’) as the title of the fourth piece in his first book of Préludes, and he quotes the opening of this prelude at the start of Les soirs illuminés. We also hear faint, disembodied snatches of the middle section of ‘Feux d’artifice’ (the last piece in the second book of Préludes), recalling the fireworks of France’s traditional 14 July celebrations: in 1917 those festivities must have seemed to belong to another, more innocent world.

In 1884 the 21-year-old Debussy won the Prix de Rome, a state composition prize that entitled him to several years’ stay in the Eternal City on a (not particularly generous) government grant. Four years later, as one of the statutory exercises or ‘envois’ required from holders of the prize, he completed his setting of verses (in French translation) from Dante Gabriel Rossetti’s The Blessed Damozel. The Académie des Beaux-Arts, the official jury to whom it was submitted for approval, commented that the text was fairly obscure, as well as being in prose, which was not what they were used to. They were kind enough, in their report of January 1889, to find the music ‘not devoid either of poetry or of charm’, but also noted sourly that it was ‘redolent of those fashionable systematic tendencies with which the Académie has already had occasion to reproach the composer’, and which they went on to specify as consisting of a certain ‘indeterminacy’.

We, with benefit of hindsight, can see that La damoiselle élue is a good deal more ‘determinate’ than much of Debussy’s later music, but at the same time we can appreciate that the French Establishment of the day was not ready for such a work. Only with the beginning of the 1880s did the paintings of Burne-Jones and the Pre-Raphaelites start to make an impression on Parisian critics and artists, and still by 1884 no Rossetti painting had been exhibited in the city.

On the musical front, Debussy’s conjunction of old church modes and (despite his disclaimer) Parsifal likewise found the artistic great and good unprepared: Palestrina and Lassus were little more than names, and few of Debussy’s judges had, like him, travelled to Bayreuth in the summer of 1888 to hear Wagner’s final opera, nor would Paris see a production of the work until 1914. Finally, La damoiselle élue exudes a precarious and rather unsettling sensuality—in part, no doubt, to Debussy the art-lover’s response to Rossetti’s painting The Blessed Damozel, to ‘the curve of her protruding upper lip, her copper-coloured tresses and the line of her swan-like neck’.