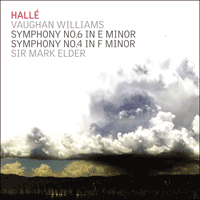 Two more symphonies in the Hallé's glorious series. No 4 takes the structure of Beethoven's 'fifth' and slams it against Vaughan Williams's newly discovered penchant for boisterous dissonance, while No 6, composed a decade later in the later 1940s, became an immediate favourite with players and audiences alike.

Symphony No 6 in E minor
Vaughan Williams’s sixth symphony was composed between 1944 and 1947 and first performed at the Royal Albert Hall in London on 21 April 1948, conducted by Adrian Boult. Its starting-point was a theme composed for, but not used in, the wartime film Flemish Farm (1943), while another of its themes was intended for some incidental music for Shakespeare’s Richard II. This is significant because Vaughan Williams had begun to write film music in 1940. He enjoyed it and found it had a liberating effect on his imagination and encouraged him to make more extravagant use of the orchestra.

The sixth caused a sensation at its premiere and was performed 100 times in two years. Nothing like that had occurred in English music since Elgar’s first symphony in 1908. Its beginning explodes in our ears like an avalanche. It has a slow movement in which an insistent Shostakovich-like three-note motif grows menacingly louder, as if describing the relentless approach of some monstrous apparition. The scherzo is like a hell’s kitchen of jazz and wailing saxophones; then it suddenly fizzles out into little fragments of sound and moves into a finale that never rises above a whisper, a ‘Waste Land’, yet with an oboe projecting a ghostly ray of hope (perhaps?) before the music dwindles away into oblivion.

Surely there was an external programme here? It’s a war symphony, some critics said, the first post-Hiroshima symphony, depicting a world laid waste by atomic warfare. Malcolm Sargent said the scherzo described the night during the war when a bomb hit the Café de Paris in London, killing the band and dozens of dancers. The composer angrily denied it. ‘Can’t a man just write a piece of music?’ All he would say was that the finale could best be summed up in Prospero’s words from The Tempest: ‘We are such stuff as dreams are made on, and our little life is rounded with a sleep’. He liked the description of it as ‘an agnostic’s Paradiso’. So where does that leave us? Most safely with the music itself, undoubtedly one of VW’s most masterly creations from every point of view. As a musical argument, it is taut and technically fascinating. The first movement contains one of the richest and most romantic melodies he ever wrote, an extraordinary contrast to the violence around it. The orchestration throughout is expansive, virtuosic, magniloquently expressive.

The sixth symphony inaugurated the prolific and fruitful 15-year creative spell that ended in the year of Vaughan Williams’s death with another symphony in E minor, his ninth, yet it is a transition work in that it links his pre-1939 and post-1945 music. It is a kind of personal retrospective, acknowledging the influence of Holst, particularly ‘Mars’ and ‘Neptune’ from The Planets, and harking back (almost by way of thematic quotation) to VW’s one-act opera Riders to the Sea, composed in the 1920s and another study in tragic desolation. When the sixth appeared, audiences just released from the anxieties of war into the anxieties of peace, recognised its reflection of a deep spiritual struggle.

The music
The symphony is constructed from the opposition of major and minor thirds, the interval of the augmented fourth and a conflict of tonalities. The allegro opens precipitately and dramatically with a clash of E minor and F minor. The music then becomes restless and jaunty, with prominent saxophone and side-drum. A ‘close-harmony’ type of tune lends a jazzy flavour. The ‘official’ second subject, in a modal B minor, is concerned, as are other themes, with the augmented fourth in alternations of major and minor. The development section maps this lyrical melody’s efforts to gain ascendancy, culminating in its enunciation by the full brass, and later in its romantic transformation to E major for strings over chords for harps and trombones. Back comes the ferocity of the opening, but this subsides to an emphatic chord on the lower strings that merges into the beginning of the second movement on trumpets …

Here, the argument is between themes a semitone apart. A tense expectancy is heightened by the emergence of a three-note rhythmic figure, ominously reiterated on trumpets and drums. Four times this builds up to a furious climax. When its passion is spent, the cor anglais utters a lament and the drums rumble quietly before the Scherzo erupts in a noisy display of fugal energy …

The clatter of xylophones adds to the scherzo’s exhilarating frenzy. The trio brings little respite, its saxophone tune later becoming a sarcastic march. The way to the scherzo repeat is found by a succession of descending augmented fourths, accompanied by tremolando violins. The movement loses its momentum and disintegrates; then the epilogue begins …

This is directed to be played sempre pianissimo e senza crescendo (‘always very quietly, without any crescendo’). The composer described it as ‘whiffs of theme drifting about’. Tonality veers between E and F. There is a sighing phrase for brass and strings and an oboe elegy. Finally, violins and violas alternate chords of E minor and E major, while pizzicato cellos and basses recall the movement’s main theme. The music drifts from our hearing toward an unknown region.

Symphony No 4 in F minor
The dissonance and harshness of Vaughan Williams’s fourth symphony took many listeners by surprise when Adrian Boult conducted the BBC Symphony Orchestra in the first performance in Queen’s Hall, London, on 10 April 1935. Yet they should not have done. A tougher harmonic idiom had been detectable in his oratorio Sancta Civitas (1923-5), in the piano concerto composed between 1926 and 1931 and in the masque for dancing Job (1930). Vaughan Williams began to write the symphony in 1931 and completed it in 1934. As early as 6 January 1932 enough was ready to be played through on two pianos to Holst, as was Vaughan Williams’s custom. While Holst was in America in April of that year, he wrote to RVW: ‘How’s the new Sym.? When I get home in July, I want a 2-piano field day of both old and new versions’, so we can deduce that he had made various suggestions which had been acted upon. He did not live to hear the finished work.

Inevitably, the symphony’s boisterous mood and its grinding opening discord led commentators to interpret it as a reflection of the increasingly dangerous international situation, especially in Germany. But writing to a friend in 1937, Vaughan Williams emphatically denied this. ‘I wrote it’, he said, ‘not as a definite picture of anything external—e.g. the state of Europe—but simply because it occurred to me like that’. The only clue he gave was when he told friends that he began the symphony after he had read an account in The Times of a festival of contemporary music. A present-day critic, Geoff Brown, writing in the RVW Society Journal (No 21, June 2001) plausibly traced this article to 1 August 1931 when H C Colles wrote a retrospect of the previous week’s festival of the International Society of Contemporary Music.

Discussing trends in modern symphonic writing, Colles wrote: ‘They all rely on the same order of stimuli. The hearer is prodded into activity by dissonance, soothed by sentiment, overwhelmed by the power of a battering climax. The appeal is primarily sensuous, even though the composer makes play with formal processes of thematic development, such as fugato, basso ostinato or variations … Perhaps there is no new principle to be discovered and the only thing to do is to make good music on an old principle …’

Reading that, Vaughan Williams may well have said to himself: ‘Just like Beethoven in his fifth symphony’, because VW’s fourth symphony in several respects emulates the ground-plan of Beethoven’s fifth as well as ‘playing with the formal processes’ of fugato and ostinato and relying on ‘the same order of stimuli’ that Colles cited. It is remarkable, and Mr Brown’s detective work struck oil. Like so much music, the symphony contains an element of self-portraiture and perhaps of personal frustration. Many of his friends recognised VW’s outbursts of temper in his music, his gusty humour and ribaldry. Perhaps that is why he said at a rehearsal: ‘I don’t know if I like it, but it’s what I meant’.

The music
The first movement begins with two four-note phrases which run through the symphony as unifying motifs. The second subject is an ardent melody for strings (‘soothed by sentiment’). This is elbowed aside by a march-like theme for horns and strings which, transferred to strings in D flat, brings the movement to a sombre close.

The slow movement is based on the second motto-theme, now heard on trumpets and trombones, then woodwind. Muted violins have a dirge-like theme over a plucked bass which leads to a long and bleak flute solo.

The scherzo is rumbustious, with a trio in which VW seems almost to parody his folk-dance style.

As in Beethoven, a bridge passage erupts into the finale’s march-theme over an ‘oompah’ bass (VW’s term). There are reminiscences of the first movement before a fugal epilogue reaches ‘a battering climax’ with the return of the work’s grinding opening bars. The end is a chord in F, slammed in our face.