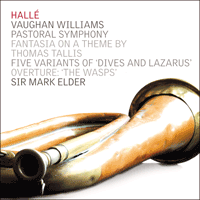 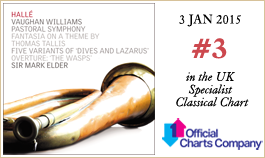 ‘The sound consistently displays commendable transparency, warmth, depth and antiphonal spread. A marvellous disc’ (Gramophone)
‘The troubled, sullied world that the music explores is recreated by Elder and the Hallé without ever becoming overwrought or maudlin, and bringing out unexpected resonances along the way’ (The Guardian)» More

‘Mark Elder and the Hallé Orchestra play the symphony from the heart and the music soars. A glowing performance of the much-loved 'Fantasia on a Theme by Thomas Tallis' also raises the spirits’ (Financial Times)» More

Fantasia on a theme by Thomas Tallis
The Tallis Fantasia has become one of Vaughan Williams’s most frequently played works and is acknowledged as one of the greatest examples of writing for strings. The composer conducted the first performance of the Fantasia in Gloucester Cathedral during the 1910 Three Choirs Festival, not long after he had returned from a period of intensive study in Paris with Maurice Ravel.

The music critic of The Times, writing about the premiere, remarked that ‘Debussy is somewhere in the picture and it is hard to tell how much of the complete freedom of tonality comes from the new French school and how much from the old English one’. Yet he went on to put his finger on why the work sounds so ‘English’: ‘We can recall no piece of instrumental music produced at a Three Choirs Festival which has seemed to belong to its surroundings so entirely as does this Fantasia.’ The work, in which a great English composer of the 20th century links hands with one of his predecessors over a gap of 350 years, was cut and revised twice—before its first London performance in 1913 and again before its publication in 1921.

In The English Hymnal, which he edited, Vaughan Williams revived Tallis’s 16th‑century tune to the words ‘When rising from the bed of death’. It became associated in his mind with Bunyan’s Christian allegory, The Pilgrim’s Progress, providing an emotional and thematic link with the operatic subject with which he remained obsessed throughout his life. His first use of the theme in this connection was in 1906 in some incidental music he supplied for a dramatisation of Bunyan’s book by amateurs. Although Vaughan Williams’s treatment of Tallis’s theme is mainly contemplative, there are dramatic and passionate moments in the Fantasia, which is scored for two string orchestras (the second orchestra comprising only nine players) with solo quartet.

The theme is first hinted at on pizzicato lower strings in a hauntingly poetic introduction before we hear its first full statement in Tallis’s four-part harmonisation. The spacious and sonorous use of spread chords, the majestic cadences and extreme range of dynamics, along with the antiphony between the two string bodies (playing alternately, the one answering the other, often like an echo), the contrast with the string quartet, and the passages for solo violin and solo viola combine to create a luminous effect.

Pastoral Symphony
Why did Vaughan Williams call his Symphony No 3 Pastoral Symphony? Certainly not to provide a comparison with Beethoven. There are no imitation bird-calls, no thunderstorms and no ‘awakening of happy feelings on arriving in the countryside’.

Vaughan Williams’s Pastoral—which I tend to think is his greatest and most original symphony—begins with flutes and bassoons playing oscillating triads in quavers, followed by a solo violin accompanied by tremolando chords. The mood is gently elegiac and dark, and there lies the clue. The symphony is directly related to the First World War of 1914-18. Vaughan Williams, although forty-one when war was declared, enlisted as a private in the Royal Army Medical Corps and served as a wagon orderly in France. Like many others, he never spoke afterwards of the horrors he had witnessed there, but they left their mark. He began this symphony shortly after his return to civilian life and completed it by June 1921 (the scoring was slightly revised in 1950‑51 for a performance by the Hallé).

The composer never publicly gave any clues as to what lay behind the music, leaving its title to mislead most commentators into portraying it as a kind of Cotswold rhapsody or a distillation of English folksong (partly true) and into making silly remarks about cows looking over gates or ‘V.W. rolling over and over in a ploughed field’. Although it was first performed only three years after the end of that terrible war, no one made the connection despite the Last Post clue.

To his future wife, Ursula, he confided in 1939: ‘It’s not really lambkins frisking at all, as most people take for granted … It’s really wartime music—a great deal of it incubated when I used to go up night after night with the ambulance wagon at Écoivres and we went up a steep hill and there was a wonderful Corot‑like landscape in the sunset.’ So the Pastoral label is explained: not the Cotswolds, but battle-scarred France, a peaceful landscape defiled by man-made war. Ironic, perhaps. It is characteristic of Vaughan Williams that what might be called his ‘war requiem’ is not full of trumpets and drums, nor of angry harmonic dissonances, but looks above the battle to the transcendence of sunsets and Corot.

Undulating woodwind chords and consecutive triads on lower strings establish a contemplative mood such as one hears in the finale of Ravel’s Ma mère l’Oye. The rich scoring of Vaughan Williams’s A London Symphony has been left behind. The second movement’s use of natural notes was inspired by the wartime memory of a bugler sounding a seventh in mistake for an octave; the cadenza for E flat trumpet creates the effect of an ethereal Last Post and it provokes an anguished heart-cry before it returns on the horn.

Vaughan Williams described the scherzo as ‘of the nature of a slow dance’ although it ends with some fast and mysteriously quiet music. Some of the material was sketched before 1914 when Vaughan Williams was music director at Stratford-upon-Avon and was contemplating a setting involving Falstaff and the fairies in the Windsor Forest scene of Shakespeare’s The Merry Wives of Windsor. The most overtly emotional movement of the symphony is its finale. Its unrestrainedly impassioned central outburst might be the Écoivres sunset, but it seems to me to represent the composer’s reaction to the loss of friends—the musical counterpart to the words he wrote to Gustav Holst in 1916:

‘I sometimes dread coming back to normal life with so many gaps, especially of course George Butterworth … Out of those seven who joined up together in August 1914 only three are left’.

The finale begins and ends with a wordless vocalise for solo soprano, first heard over a very soft drumroll but unaccompanied when it returns. So the human voice intrudes upon the landscape, but it is an ethereal, transcendental voice. Is it a girl singing over the killing-fields, or something more mystical? Elgar, in the second of his wartime recitations with orchestra, Une voix dans le désert (1915), hit upon the same poignant device of a girl’s song. It is unlikely that Vaughan Williams ever heard Elgar’s piece, but it is nevertheless a curious coincidence that two of the greatest English composers should have used a similar method of conveying wartime emotion recollected in a kind of tranquillity.

The first performance of the Pastoral Symphony was in the Queen’s Hall, London, on 26 January 1922 at a Royal Philharmonic Society concert conducted by Adrian Boult. He remembered that afterwards Vaughan Williams gently rebuked him for his slow tempi. Some time later he attended a performance which V.W. conducted in which the tempi were just as slow. He challenged him about this and received the reply: ‘Well, you see, I’ve conducted it myself several times now and find that it’s not as boring as I feared.’

Five Variants of Dives and Lazarus
Five Variants of Dives and Lazarus, for strings and harps was written for the New York World Fair in 1939, when Sir Adrian Boult conducted the first performance in Carnegie Hall. Vaughan Williams first encountered the folksong Dives and Lazarus in 1893, when he was 21, and he described its effect thus: ‘I had the sense of recognition—here’s something which I have known all my life, only I didn’t know it!’ Later he collected several versions, and in this mature work he displays his affection for the melody in variants which are not exact replicas but reminiscences of various versions in several folksong collections, including his own.

The tune is stated in rich harmonies. Variant one is in triple time, with harps providing a ‘running commentary’ on an outline of the tune; the second is quicker, a sketch in three‑bar phrases; the third variant has a new modal version in D minor (solo violin and harp) followed by a slower F minor variation; the fourth is in a stately 2/4 time; and the final variant is the version collected by the composer in 1905 to words associated with Maria Martin, the Red Barn victim (the early 19th‑century folk tale of fact and fiction inspiring words and music in various genres). The grand re-statement ends with a cello solo, a gentle resolution on the strings and rising arpeggios for harp.

The Wasps
In 1908 Vaughan Williams was invited by his old university, Cambridge, to provide the incidental music for the following year’s production of The Wasps by Aristophanes, an ancient Greek satire on the Athenians’ penchant for litigation. And, in the winter of 1908-09, he composed an ambitious score (comprising an overture and 17 other musical numbers, ranging in length from just a few seconds to over 20 minutes), which was first performed in November 1909, with Charles Wood conducting. It was Vaughan Williams’s first large composition since his studies with Ravel early in 1908 and the influence is often apparent. The composer later extracted a five-movement orchestral suite, premiered at the Queen’s Hall in London in 1912, since when the Overture has become one of his most popular works.

The Overture begins with the buzzing of a swarm of wasps, culminating in a fortissimo sting. A jolly folk-like tune then takes over, followed by a brisk march. The tempo slackens, horns call and a broad stately melody sweeps in on the strings, one of English music’s great tunes. After the material has been recapitulated in a slightly different form, this splendid piece ends with a bang. There is no attempt at pseudo-Greek scales. If I may quote myself: ‘Vaughan Williams’s Athens is Edwardian Cambridge, with the folk songs blowing in from the fens.’