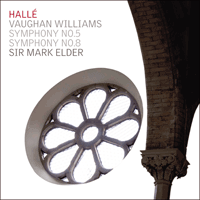 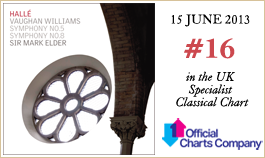 ‘The Scherzo shows the Hallé winds and brass to excellent effect and I was warmed by Elder's well-aimed use of string portamentos in the 'Cavatina' … I would recommend it unreservedly’ (Gramophone)
‘Elder's way with Vaughan Williams' Fifth Symphony is one of those interpretations that grows with repeated hearings. As expected from the current Hallé vintage, it's finely played in every department, with true live-recording atmosphere’ (BBC Music Magazine)

‘Vaughan Williams’s outwardly serene Symphony No 5 is a difficult work to get right … which is why Sir Mark Elder’s recording does succeed; he manages to inject a hint of drama into the static opening movement and brings the Scherzo to life’ (TheArtsDesk.com)
‘The playing on this live recording is superb throughout … for me, though, the stars of this recording are definitely the horns: their sound is consistently glorious … all in all this is a splendid recording from Elder and the Hallé’ (Presto Classical)

Symphony No 5 in D major
The year 1937 saw a hiatus in Vaughan Williams’s creative work. He had no big project in hand except the ongoing plan for an opera based on Bunyan’s The Pilgrim’s Progress, an ambition that had obsessed him since 1906, when he wrote some incidental music for an amateur production. In 1921 he wrote an ‘episode’ in one act, The Shepherds of the Delectable Mountains. Over the next 15 years he composed three operas, the Fourth Symphony, the Piano Concerto, the ballet Job and other works, but the Bunyan opera was always in his mind. To a friend he wrote in July 1937 that ‘my private opinion is that I have dried up’. In the same month he asked his friend, the composer Gerald Finzi, to send him a list of available recordings of the works of Sibelius. But sometime in 1938 he was asked for two items to be performed by military band as part of a pageant—England’s Pleasant Land—to be held at Westcott in Surrey. We now know that these items contained music that later appeared in the first movement of what was to become the Fifth Symphony and were written years earlier and intended for the Pilgrim opera.

Vaughan Williams knew now that he had not dried up. What was the cause of the return of his creativity? Perhaps it was the immersion in Sibelius’s music. Or perhaps the entry into his life in the autumn of 1937 of an army officer’s wife nearly 40 years his junior, Ursula Wood. Their friendship led directly to the composition of the idyllic Serenade to Music during 1938 and to rumours of a new symphony. Evidently the composer had decided that the Bunyan opera might never materialise (although it was eventually completed and produced at Covent Garden in 1951), so he diverted some of its themes to a symphony on which he worked from 1938 until early in 1943. It was played through by the BBC Symphony Orchestra conducted by Sir Adrian Boult at Bedford (the orchestra’s wartime home) on 25 May. The first public performance was given by the London Philharmonic Orchestra at the Proms in London on 24 June. Vaughan Williams conducted in place of Sir Henry Wood, who had been taken ill. The symphony was dedicated to Sibelius ‘without permission’. (The Finnish composer wrote in his diary after he heard the symphony: ‘Yesterday a great moment like a caress from a summer world. Heard the symphony that Vaughan Williams has dedicated to me.’)

Most of the reaction to such a generally tranquil work in 1943 in the midst of the Second World War was that it was a valedictory benediction. Vaughan Williams was 70 and this brought his work full circle. Who could have guessed that four more symphonies and many other works were to follow and that the peaceful end of the Fifth would be followed by the cataclysmic opening of the Sixth? Although the serene tranquillity makes a predominant impact, there are harmonic tensions and dissonances which indicate that all is not quite as it might seem. The links with the Pilgrim’s Progress opera were concealed except in the third-movement ‘Romanza’, which was originally headed by a quotation from Bunyan. Its beautiful cor anglais theme is sung in the opera to the words: ‘He hath given me rest by His sorrow and life by His death.’ The symphony is scored for a conventional orchestra, with no exotic instruments and timpani the only percussion. There is no harp. ‘English’ though the work’s background may be, the music is often influenced by Ravel, with whom Vaughan Williams had studied in 1908.

In spite of the work’s dedication to Sibelius, the listener who seeks resemblances in Vaughan Williams’s Fifth Symphony to the style and method of the Finnish composer will not find much to justify his zeal. One obvious similarity, though, is that each man began his fifth symphony with a horn‑call. Played in D major by two horns above low Cs on cellos and basses, this call dominates a movement in which Vaughan Williams is at pains to emphasise the vagueness, one might say instability, of its tonality. D major is established only by (in Frank Howes’s graphic phrase) ‘gravitational pull’. A thrilling change into E major for the second subject affirms the aspiring mood of the symphony, which to some degree resembles the ‘Alleluia’ motif from his hymn-tune ‘For all the saints’. An allegro middle section is dominated by a three‑note figure containing a flattened second that is repeated like a warning by one woodwind instrument after another. The music becomes suddenly tempestuous, with tremolando strings—I suppose this passage is really rather Sibelian—and subsides into a return of the horn‑call and a recapitulation of the principal material.

The fleeting ‘Scherzo’ begins with a pentatonic figure on the lower strings but is notable for the explosive brass and croaking woodwind. It is built from several short themes, irregular in rhythm and contrasting in mood. The general atmosphere is one of uneasiness.

The slow ‘Romanza’ movement is closest in spirit and substance to the music of the Pilgrim’s Progress opera. Triads on the strings introduce the tranquil cor anglais theme in C. An agitated episode is calmed by a solo horn playing the cor anglais melody. This material is repeated but in a varied form culminating in an impassioned ‘Alleluia’. Thenceforward all is calm.

The finale, a ‘Passacaglia’, begins in D major. The theme is played by cellos and is followed by a counter-theme that again sounds like ‘Alleluia’. In the variations that follow, this motif is a dominant feature, contrasted with a scherzando and really quite jolly version of the passacaglia theme. A fragment of this tune is repeated several times to herald the inevitable return of the horn-calls from the start of the symphony, a climactic moment that may recall a similar passage in Ravel’s Daphnis et Chloé. Another motif from the first movement inaugurates the symphony’s epilogue. Henceforward the composer uses no accidentals and the music achieves an other-worldly calm, the basses ending in the depths of D, the upper strings climbing to some celestial A.

Symphony No 8 in D minor
This is the shortest and least serious of Vaughan Williams’s symphonies; one hesitates to say ‘lightest’ since it is not without moments of vision of a more sombre character, but generally it is optimistic in mood. It was composed between 1953 and 1955 when Vaughan Williams was in his eighties. It was one of a series of late works in which he seemed to be making a point of enjoying the exotic instrumental combinations and extravagances that he had eschewed in earlier years. In this case it is the percussion section, with vibraphone, xylophone, tubular bells, glockenspiel and three tuned gongs that dominate the sound in the first and last movements—‘all the ‘phones and ‘spiels known to the composer’, he said. The symphony is dedicated to Sir John Barbirolli, who conducted the first performance at a Hallé concert in Manchester on 2 May 1956.

It would, however, be a mistake to regard the symphony as wholly or merely a jeu d’esprit of freakish scoring. The first movement is among the most highly and skilfully organised he wrote, with rich and diverse thematic material. Vaughan Williams called it ‘seven variations in search of a theme’, declaring that ‘there is no definite theme’—and variations 2 and 5 were the first part of the work to be composed. In fact there are three principal closely related motifs: two rising fourths for trumpet, answered by vibraphone; a phrase for flute; and another for strings. The variations illustrate facets of this composer’s style. The second, presto, plays around with all three motifs; the third is a chorale-like tune in A minor for strings and harp with a subsidiary theme for oboe and cello. Both these themes are derived from the initial trumpet motif, as is variation 4, an allegretto in 6/8 for oboe and clarinet. In the fifth variation, the trumpet figure is lengthened out by cellos and harp, joined by other instruments; No 6 is in quicker tempo and develops the flute motif in bassoons, cellos and basses. For the seventh variation the chorale tune of the third is presented largamente. The movement ends with the opening motif returning on the trumpet, with a final shimmer on vibraphone and strings.

The Hindemithian scherzo is scored for wind instruments alone. It too has three themes, or motifs—one (very perky) for bassoons, the second for trumpet and the third for flutes and other high woodwind. A fugato section develops, followed by a short trio (mock-pastoral?) and a brief return of the scherzo. In the slow movement it is now the strings’ turn to hold the stage alone. Cellos play the long and sinuous principal theme in E minor, ‘a mix-up in my mind’ (to quote the composer) with the theme of the Passion chorale ‘O sacred head’. The second subject in A flat is given to the first violins. A rhapsodic middle section, with violin solo, does duty for development; and a solo cello dominates the coda when first and second subjects are combined. If Delius had not appropriated the title ‘Late Swallows’, it would have been a good choice for this beautiful old-age reverie of farewell to Tallis and larks ascending.

Vaughan Williams described the opening of the finale as ‘rather sinister’ and although much of it is joyfully exuberant its opening theme, as Oliver Neighbour has pointed out, resembles Holst’s melody for the Remembrance Day hymn ‘O valiant heart’. Perhaps, therefore, this masks another tribute to human heroism. Another important theme is given to strings and horns. Four episodes follow in which the percussion—chiming, glissando or vibrating—is to the fore, but there is time for a moment or two of repose before the first subject is emphatically re-stated. This is the only Vaughan Williams symphony besides the Fourth to end loudly.