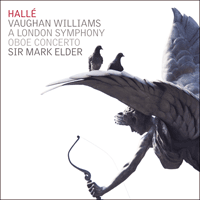 ‘Both the introduction to the first movement and the introspective slow movement are beautifully judged by Elder and the Hallé string, while the deftness with which he touches the detail of the rather discursive scherzo shows masterly tact’ (The Guardian)

‘Rancourt makes the strongest case I have heard for the attractively tuneful Oboe Concerto with his powerful, almost trumpet-like tone’ (The Sunday Times)
‘Sir Mark Elder’s live reading is polished to perfection, affectionate but never indulgent, and with a satisfying warmth to the Hallé’s string sound’ (TheArtsDesk.com)

Concerto in A minor for oboe and strings
Sketches which Vaughan Williams considered using for the Scherzo of his Fifth Symphony, were later commandeered for the first version of his Oboe Concerto, completed in 1942. After heavy revision in 1942 43, he offered the concerto to Sir Henry Wood for the 1944 Proms season. ‘I am so sorry for the delay’, he wrote, ‘which is due to the fact that when I had, as I thought, finished it, I began to re-write it’. Wood refused it as unsuitable for the Albert Hall, but changed his mind. As it happened, the season was cancelled because of the flying bomb attacks on London. The first performance was given at a Liverpool Philharmonic concert on 30 September 1944 conducted by Malcolm Sargent with the dedicatee Léon Goossens as soloist. Though generally regarded as one of Vaughan Williams’s minor works, the musical content is of a high order. From a conversation I had with him, I know that this concerto meant a lot to the composer.

The first movement, in A minor, is marked allegro moderato. The oboe enters in the second bar with the cantabile first subject, a slightly melancholy, or at any rate wistful, tune which is rapidly followed by a short agile cadenza over a held note by the cellos. The strings launch the second subject of the Rondo in a G major episode. This is taken up by the oboe (which is silent for only 17 bars of the movement). When this has run its course the strings introduce a lighter episode in C minor, a skippy folk-song-like theme which proves much to the oboe’s liking when it takes it up. It provides a variant which serves as a subject for intensive discussion, or development, between oboe and strings. As expected, the first subject returns and its vein of melancholy affects the end of the movement, an accompanied cadenza (some of the accompaniment being merely held chords). In a mood of gently impassioned lyricism the movement ends with the soloist’s long E natural pianissimo.

Allegro moderato is also the tempo direction for the second movement, which is in C minor. The oboe plays the rather deliberate Minuet theme, with pizzicato accompaniment at first. The strings elaborate this theme. The Musette section opens, as the form requires, with a drone, played by the oboe for three bars followed by an ornamental cadenza. The Minuet returns and this movement ends quietly.

The Finale is the most elaborate and weighty movement, a scherzo with two trios—as far as any kind of strict form is observed. Flourishes for strings and the oboe eventually settle down into a theme announced by the strings and decorated by the soloist. What may be described as the first trio is in waltz rhythm and becomes a graceful dialogue between oboe and strings swept by little gusts of passion. (Throughout this Finale in particular, the composer makes virtuoso demands of the soloist.) A cadenza sends the strings into a calm reverie and the oboe plays a new and fervent melody on which it muses gently with rich string harmonies as background. The lighter mood of the opening returns but is still autumnal and the oboe insists on resuming its lyrical outpouring. If we are reminded of the last rose of summer, that is consonant with the longing being expressed so movingly. There is a final presto cadenza for the oboe before the movement, which began in E minor, end in a tranquil G major.

A London Symphony
The first mention of A London Symphony is in a letter from Vaughan Williams to the folk-song collector Cecil Sharp in July 1911. ‘I am in the middle of a great work’, he wrote, ‘& unless I get stuck in it I don’t want to leave it’. This suggests he may even have begun to compose it as early as 1910. His friend the composer George Butterworth had urged him to write a symphony, so some sketches for a symphonic poem about London were looked out and ‘thrown into symphonic form’. The day after the first performance on 27 March 1914, Butterworth wrote to VW that he was ‘frightfully glad’ that ‘you have at last achieved something worthy of your gifts … I really advise you not to alter a note of the Symph. Until after its second performance (which is bound to come soon)—the passages I kicked at didn’t bother me at all, because the music as a whole is so definite that a little occasional meandering is pleasant rather than otherwise. As to the scoring, I frankly don’t understand how it all comes off so well, but it does all sound right, so there’s nothing more to be said’.

The general critical reception of the symphony was favourable but the composer himself—according to the critic A.H. Fox Strangways—went about ‘asking friends to tell him what to cut out’. So it is clear that he was dissatisfied with it from the start. Within a week of the first performance, he had an inquiry from Paris about a projected performance at the Théâtre du Châtelet. There was also mention of an Edinburgh performance. Neither materialised. At some point in this period, the manuscript full score was sent to Germany, whence it never returned. Butterworth organised a reconstruction from the original parts with the help of Vaughan Williams, E. J. Dent, and Geoffrey Toye (who had conducted the first performance).

This score was used on 18 February 1918, when Adrian Boult conducted and the composer, on leave from the army, was present. After this the long process of revision began. Boult planned a repeat performance for 18 March and Vaughan Williams wrote to him late in February: ‘I agree with you that the last movement & possibly the scherzo … are too long—but it is re-writing they want—I do not think that mechanical cutting, however skilfully done, wd. Be satisfactory’. More revisions were made for a performance conducted by Albert Coates on 4 May 1920. This was followed by publication of the score in the same year. It carried a dedication to the memory of Butterworth who had been killed in action in 1916. Further revisions were made in 1933 (‘some of the bad bits were cut out’, V.W. said) and a few more in 1934. The revised full score appeared in 1936. Performance and recording of the original 1913 score were authorised not long before her death in 2007 by Vaughan Williams’s widow Ursula. The restored cuts amounted to 20 minutes of music, some of it very fine.

Vaughan Williams said that the Symphony ‘must stand or fall as “absolute” music’ and that a better title might have been ‘Symphony by a Londoner’ (he composed most of it in his home in Cheyne Walk, Chelsea, with its superb view of the river). In an article written in 1912 while he was working on the symphony, he asked: ‘Is it not possible that the English composer has something to say to his own countrymen that no-one of any other age and any other country can say? Have we not all about us forms of musical expression which we can purify and raise to the level of great art?’ In this symphony street cries, the Abbey chimes, the Cockney’s mouth-organ and accordion, are raised to the level of great art. Mahler would have approved. The influence of Debussy and Stravinsky can be detected, also—though less obviously—that of Elgar, whose evocation of late-Victorian London in Cockaigne (1901) is celebratory where Vaughan Williams is generally tragic and sombre although his orchestration is as vivid. When in 1951 he revised the scoring of his then existing six symphonies, he omitted the London, telling Sir John Barbirolli that it was ‘past mending though indeed with all its faults I love it still—indeed it is my favourite of my family of six’.

The slow, quiet introduction to the first movement depicts dawn, with London ‘lying still’, as Wordsworth saw it. Harp and clarinet sound the half-hour of the Westminster chimes, the music wakes to busy life and the main allegro section begins with one tune after another scurrying along. A declamatory second subject (woodwind and brass) leads into a high-spirited episode and this is followed, after a brief return to the material of the first subject group, by a quiet, delicately scored passage which perhaps depicts a church or one of London’s parks. The movement ends with a grandiose restatement of the second subject.

Vaughan Williams likened the slow movement to ‘Bloomsbury Square on a November afternoon’. Against a background of wide spaced chords on the strings, the cor anglais plays a melancholy tune marked misterioso. This opening passage is repeated in E major scored for harps and trombones and with a horn taking over from the cor anglais and sounding the rising fourth which is a thematic feature of the introduction to the first movement. Viola and woodwind have a dialogue which quotes a lavender-seller’s cry and the jingle of hansom cabs is heard. The music now becomes restless and eerie and rises twice to a passionate climax. As this subsides, the main themes of the movement are heard again and the solo viola closes the movement poetically.

The scherzo is perhaps the most picturesque movement and is the most heavily revised. It begins vivaciously with fragments of themes tossed about in the orchestra. A fugato section is more portentous. The scherzo section is repeated and a bassoon links it with the trio (in C major) in which a convivial Cockney scene, centred on a mouth-organ (muted horns) and piano accordion, is vividly evoked. The high spirits yield to a more sombre and almost sinister treatment of the principal themes. Horn and violin solo continue this elegiac vein and the movement ends in reflective mood.

The finale opens with a tragic appassionato theme like a cry of despair. Cellos introduce a slow march theme which leads directly into an animated allegro section dominated by a solemn theme for strings and horns. Undoubtedly some grimmer aspect of city life—the hunger marches, the slums—is the inspiration of this part of the symphony. The march theme is worked up to an impassioned climax, its final statement being crowned by a stroke on the gong. The Westminster Chimes sound the third quarter and the Epilogue begins with a rippling figure which tells us that the Thames is its subject. The composer said that this Epilogue was suggested by a passage in H. G. Wells’s novel Tono-Bungay where London is described as seen from a warship sailing down the river towards the sea: ‘To run down the Thames so is to run one’s hand over the pages in the book of England from end to end. The old cries and the old devotions glide abeam, astern, sink down upon the horizon, pass—pass. The river passes—London passes, England passes …’ Fragments of earlier themes are recalled and, after a final elegiac violin solo and solemn chords, the music swells to a quiet end—and a prophetic one, too. Six months after the first performance England was at war with Germany and the 42-year-old composer of A London Symphony had enlisted in the army.