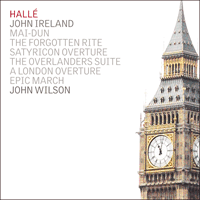 ‘New recordings of such strongly appealing repertoire are always welcome, especially when they demonstrate such palpable conviction, joyous sense of new discovery and tingling enthusiasm … superbly detailed and vivid’ (Gramophone)
‘This attractive compilation, sparkily performed by John Wilson and the Hallé, is exactly the kind of push Ireland's reputation needs’ (The Guardian)

John Ireland, composer, organist and pianist, was born in Bowdon, Cheshire, the youngest of five children of Alexander Ireland (1809-94), an influential Manchester writer and publisher, and Annie Elizabeth Nicholson (1839-93), his mother also a published author and critic. In 1893 Ireland enrolled at the Royal College of Music, where he studied with Stanford.

Though he led a life that was in many ways uneventful, Ireland’s distinctive musical style reveals a highly expressive and often contradictory personality. He could frequently be gloomy but at other times exuberant and witty, passionate yet taciturn. Ireland was a practising Anglican for most of his life, though as he grew older his faith was increasingly tinged with doubt, cynicism and an attraction to paganism. He loved the English countryside, in both its most rosy and rugged aspects, but also had a strong attachment to London, the city in which he lived for sixty years. Ireland’s compositions are nearly always closely linked to a specific individual, place or event, and personal musical symbols, connections and images fill his music.

Although Chelsea was his permanent home for most of his life, Ireland was drawn to countryside sites of historic significance such as burial sites and hill forts. With their many long barrows, tumuli and dolmens, the Channel Islands and the South Downs exerted a particular fascination, and Ireland was a frequent visitor to Sussex and Dorset from early in his life. The symphonic rhapsody Mai-Dun (1921) was inspired by Maiden Castle, the prehistoric fortification near Dorchester. Like many of the composer’s works it also has literary connections, in this case the writings of Thomas Hardy. The piece is an evocation of the strife and determination of the ancient Briton community at Maiden Castle, invaded by the Romans under Emperor Vespasian in AD 43, this event constructed in sound by Ireland through a sequence of contrasting and alternating musical sections representing the fort at war and the fort at peace.

In 1913 Ireland produced the first of his significant orchestral tone poems, The forgotten rite. He made regular and lengthy visits to Jersey from 1908 until 1914, and this island, with its many pagan locations, in part inspired the piece. Two spectacular ancient sites associated with ancient rituals, some sacrificial, some concerned with fairy magic or witchcraft, were being excavated while Ireland was on the island. The forgotten rite is also a vision of Pan the goat-God, close in spirit to contemporary music on the same theme by Bax, Debussy and Ravel. It opens with an ambiguous, hovering chord sequence marked ‘lento e mistico’. The symbolic flute call that follows is an archetypal panpipe melody, which is transferred after several bars to the trumpet for the revelation of Pan’s presence. This first section of the work leads to a central pastoral idyll with an expansive oboe solo. For the departure of Pan, Ireland creates subtle changes. He returns to the original flute motif, though now played by the piccolo. Just as the bright trumpet timbre and the use of the full orchestra signified the bold arrival of Pan, his disappearance is marked by a final, other-worldly celesta motif over sustained string chords.

In the early 1940s Ireland was drawn to the works of the Roman writer Petronius, and specifically to the character of the boy Giton featured in the Satyricon, ‘a recital of lecherous happenings’. In 1944 he began work on an orchestral overture with the material of this book at its heart. Satyricon was completed in 1946, and performed in the Promenade season that summer, dedicated as a wedding present to Julian Herbage and Anna Instone. These two were responsible for the BBC programme ‘Music Magazine’ for nearly thirty years. It echoes the sentiments of a number of Ireland’s works of the 1940s, entwining history, literature and images of beautiful youths. The overture is in seven major sections using three main ideas. The first captures the joyous side of the Satyricon, with bouncy rhythms, prominent brass and percussion, the use of the whip surely a witty reference on the composer’s part to the whipping scenes in Petronius’s book. This alternates with a soaring, affirmative melody. The centre of the work has a third new tune, a rhapsodic clarinet solo (perhaps, as hinted at in letters from Ireland to friends, a reference to the boy Giton) over shimmering strings and rippling harp. The overture closes with great vivacity, the tone entirely joyous.

In that same year (1946) Ireland was asked to provide the music for a patriotic film, The Overlanders, and despite no previous experience of writing for film he became engrossed in the project. Produced by Michael Balcon and directed by Harry Watt (who had worked on the renowned 1936 Britten-Auden collaboration, Night Mail), the film’s story tells of an epic journey in which tens of thousands of cattle were ‘overlanded’ from the Northern Territory to Cairns in order to save them from Japanese aerial attack or invasion. Ireland was asked by the music director of Ealing Studios, Ernest Irving (1878-1953), to write a series of short musical episodes to accompany key moments in the film. Even at the time of writing Ireland felt that his music would make an excellent concert piece, and the best moments are brought together into an effective five-movement Overlanders suite within which are passages of the fluctuating musical episodes that the composer created for love, war and pastoral inland Australia. At one point the drovers have to catch wild horses, or ‘brumbies’, and Ireland wrote two vivid sequences of music associated with this event, a brilliant whirl, ‘Catching the brumbies’, and the short sequence, ‘Breaking the brumbies’, featuring a wayward and widely-ranging solo melody line designed with the eminent clarinettist Frederick Thurston in mind.

Ireland knew London as the city in which he lived for most of his life. But for him it was also a literary and pictorial landscape that influenced many of his compositions, an amalgam of myriad images of the city from Dickens to Eliot and Whistler. Ireland’s musical London might be a journey around the capital through a succession of different sections of music, or a tiny sketch of a corporate character. His 1936 London Overture was a reworking of an earlier Comedy Overture for brass band, but also has much in common with London works by other composers, notably with Elgar’s Cockaigne. A London Overture opens with one of the thumbprints of Ireland’s music, a pithy but arresting upward flourish. The sprightly main tune, which outlines the word ‘Piccadilly’, dominates the piece, and uses some of the classic hallmarks of British light music in the manner of Eric Coates, such as bowed offbeats, twinkling woodwind interjections and prominent percussion. The overture’s second theme, by contrast with the jauntiness of the first, is an expansive outpouring, a nostalgic reminder of a bygone Edwardian city. The central section of the work moves to an entirely different landscape, quoting from Schumann’s song ‘Widmung’ and featuring a sorrowful French horn solo. There are complex, personal associations at play here. The piece is not just about the place of London, but also about its people, in part an elegy for Ireland’s sculptor friend Percy Bentham, who had died earlier that year. At the same time A London Overture has elusive musical references to the composer’s recent series of close, tempestuous relationships, which included a former choirboy, Arthur Miller (1905-86), and a beautiful young pianist, Helen Perkin (1909-96), for whom he wrote his Piano Concerto in 1930, in addition to a disastrously short-lived marriage to a much younger woman, Dorothy Phillips, in 1926.

In July 1939 Ireland moved to Guernsey, but by May 1940 was forced to leave the island due to the imminent German invasion. On his return to London he produced a number of war-related works, including the patriotic Epic March (1942). This orchestral work was commissioned by the Ministry of Information, whose aim was to foster community spirit and a national, democratic aspiration for peace. In conjunction with Adrian Boult and the BBC, the Ministry contracted a number of composers to write musical works for propaganda purposes. In September 1940 Boult approached Vaughan Williams to produce a song or hymn on a patriotic theme, the outcome of which was England, my England, and in November he then proposed to Ireland that he should consider writing a patriotic march. Epic March is prefaced with this definition of the word ‘epic’: ‘Concerning some heroic action or series of actions and events of deep and lasting significance in the history of a nation or race’. It has two principal musical ideas, one a grim, driving theme in C minor, dominated by brass, the second a more ponderous theme in C major. The central section of this anti-fascist march introduces a new lyrical melody in E flat major, its broad lyricism in contrast to the brittle opening. The march ends with its opening music transformed into the tonic major key.