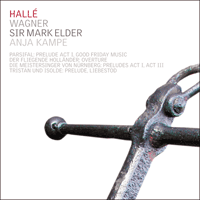 ‘Anja Kampe is a clear, word-conscious, passionate Isolde, closely in tune with the 'house style' of these interpretations, while the final pages of this Liebestod (after the voice finishes) are attended to with a Boulez-like detail and fascination’ (Gramophone)
‘Admirers of Hallé or Mark Elder or Wagner, or all three, shouldn’t hesitate. This is an excellent disc in splendid sound’ (MusicWeb International)

By 1882 Wagner had fulfilled his meticulous long-term plans for his other works, writing his own librettos and designing, at Bayreuth, his own progressive theatre, complete with hooded orchestra pit and—as part of his search for aural perfection—punitively unpadded seating. From passion and politics as his subject matter, underpinned by psychology and philosophy and the grand unhurried flow of his music, Wagner turned finally to religion and the story of the Knights of the Holy Grail. Yet his abiding preoccupation with the inner life of his characters, and with redemption by love and self-sacrifice, was as strong as ever, laced in Parsifal with suffering, atonement, and, above all, compassion. The title-role has links with Lohengrin (who, it should be remembered, was Parsifal’s son) and even with the dying Tristan, though Wagner’s intention to have Parsifal visit Tristan as a pilgrim was never realised. His ‘sacred festival drama’, as he chose to call it, was quite death-conscious enough in its emphasis on the unhealing wound from which Amfortas, ruler of the knights, appears to be slowly dying; on the death and graphic funeral of Amfortas’s aged father Titurel; and on the symbolic shooting of the wounded swan, killed by Parsifal as it flies overhead.

Death-consciousness pervades the Prelude to Act I, although, as Wagner insisted, its poetic content is summed up in three words: ‘Love—Faith—Hope’. The music is a tissue of themes from the opera itself, the atmosphere curiously redolent of the similarly death-conscious prelude to Elgar’s The Dream of Gerontius, completed seven years later and soaked in what has been hailed as the ‘Parsifal sound’. In the context of all that precedes it, the cool Good Friday Music steals into Act III of Parsifal like a breath of fresh air. Written in Wagner’s most delicately pastoral vein, it evokes the serenity of a Good Friday morning in the course of which Parsifal returns from his long quest and is anointed King of the Grail. Though the music incorporates as many as seven of the opera’s most meaningful themes, or what in Wagnerian parlance are called leitmotifs (‘leading motifs’), it can be heard simply as a beautiful benediction, without reference to the specific message of each of its component parts.

Written soon after Rienzi and just before Tannhäuser, Der fliegende Holländer (The Flying Dutchman) transformed Wagner from a composer of no great consequence into one who mattered very much indeed. Completed in 1841, it was the first of his works to address with maturity the idea of death and human redemption, a theme he would pursue relentlessly to the end of his career. It was also the first to reveal his flair for scene-painting, the overture standing out as a sensational example. The immediate inspiration behind it was a traumatically rough sea-voyage during which he made some brief jottings. It was the lusty tune of the sailors’ chorus (heard about halfway through the overture) which came to him as he listened to the voices of the crew of the ship carrying him, on a three-week voyage, from the Baltic coast to London, with Paris as his ultimate destination.

At one point, during a storm, the ship sheltered in Sandwike, a Norwegian harbour. The incident etched itself in Wagner’s memory and when, two years later, he wrote his libretto for the Dutchman, he opened the action with the phantom vessel seeking refuge in that very same haven. Whatever psychological superstructure he later built on the legend of the sailor fated to remain on board his ship for ever, the orchestral part—as the overture immediately proclaims—is steeped in the moods of the sea. Not for nothing did Franz Lachner, one of the work’s first conductors, declare that whenever he opened the score ‘a wind seemed to blow out of it’. The music evokes the lash of spray, the whistle of gales in the rigging, visions of masts and shrouds, heaving waves, misty spectres.

But the opera’s psychology is equally important, for it marks a major turning-point in Wagner’s career, taking him away from the brash world of 19th-century grand opera, as represented by Rienzi, and into the more metaphysical subject matter of Tristan and Parsifal, both of them also represented on this disc. Gradually the stormy sea came to symbolise for him the torments in the minds of his two main characters: Senta, the brooding Norwegian girl, and the doomed Dutchman who is saved by her. A familiar ghost story and a battle with the elements had transformed themselves into a drama about Jungian dreams and yearnings for death.

Yet the overture, at the same time, is a cogent compression of material from the opera itself, starting with the sound of the storm through which the Dutchman’s ship comes sailing. Senta’s message of hope, in contrast, is slow and tender, its promise fulfilled in the glow of the overture’s closing bars. Whether it was the sailors’ foot-stamping chorus, which intrudes upon the storm, or (as Wagner also claimed) the voice of Senta that triggered his imagination, is of no great consequence. The two themes share so many notes that the one is clearly a metamorphosis of the other.

Comedy, as exemplified by Die Meistersinger (1868), was even less Wagner’s operatic forte than it was that of his exact contemporary Verdi. The four long portions of the Ring cycle, it is often remarked, possess between them only a single joke. Yet just as Verdi ended his career with the fun of Falstaff, so Wagner, in the midst of writing Tristan and the Ring, tackled Die Meistersinger, whose humanity and humour are enough to make you wish he had turned to such things more often. Its characters are real: the townsfolk caught in the act of deciding who should win the local song contest. The story of the 12 judgmental mastersingers, and of the young lovers and the apprentices, drew from the composer an intricate web of dramatic and musical counterpoint vividly outlined in the overture. Buttressed at its start and close by the monumental mastersingers’ march, this incorporates a further march (with a stamping Beethovenian rhythm) and, in contrast, the golden, fine-spun music of the young lovers, Eva and Walther, and the ardent song with which Walther eventually wins the contest. These add an air of romance to the overture’s grand, imperturbable flow, and further contrast comes with the merry arrival of the apprentices, denoted by a quick-moving, irreverent version of the opening march.

The Prelude to the vast final act of Die Meistersinger is slower, darker, more philosophical. The rich, broad theme on the strings with which it opens is associated with Hans Sachs, the good-hearted cobbler around whom Wagner builds his glowing portrait of life in medieval Nuremberg. The sonorous chorale for horns and bassoons that follows anticipates the ode of homage to Sachs voiced at the close of the opera. By then the various human relationships and confrontations have been resolved, the song contest (which powers so much of the action) has at last been won by Walther, and Sachs has been fully honoured for his devoted upholding of sacred German art.

If, as is said, Parsifal is all about ritual—‘the action’, according to one authority, ‘has all happened before, is happening now, and will happen again’—Tristan und Isolde is all about promise but evaded fulfilment. And, by 1859, Wagner as usual had found exactly the right musical language with which to express it. Different from that of Der Ring des Nibelungen, which he temporarily discarded in order to write Tristan, and from the grand comedy of Die Meistersinger, it was also quite different from what followed in Parsifal. Yet it is unmistakably a masterpiece by Wagner, perhaps the greatest of them all. More than anything, it is an operatic expression of yearning, audible in the very first, and very famous, note or notes of the prelude, which reputedly made the French composer Chabrier weep when he heard it in the darkness of Bayreuth’s Festival Theatre, not built until 17 years after the work was composed. The opening ‘Tristan chord’, as it is familiarly known, is never fully resolved until Isolde’s Liebestod, or ‘love-death’, several hours later. Between first note and last, the two principal characters, Tristan the Cornish knight and Isolde the Irish princess, forced into each other’s company on board a ship, move from hatred to love and from love to death.

Though the ship is conveying Isolde, with Tristan as escort, to her wedding to the ageing King Marke of Cornwall, she initially shows nothing but contempt for the insolent young knight—he had, after all, killed her former betrothed in a fight and is now taking her towards a marriage she does not desire. Yet contempt conceals Isolde’s real problem. She is in love with him, though it needs the symbolic love potion, which she drinks on the assumption that it is poison, to make her wholly aware of the fact. This, in its own terms, is what the orchestral prelude tells us and what the Liebestod, sung by Isolde to the dying Tristan, finally confirms. Wagner’s enlarged orchestra is fundamental to a work almost exclusively about love and passion. Plusher and more eloquent than ever before, it sometimes—in fact quite often and surely deliberately—obscures the words of the singers in music more flowingly integrated and more sensuously chromatic than anything else Wagner wrote. More perhaps than in any other music drama, the orchestra in Tristan is the engine that drives the story and conveys the emotions of the characters.