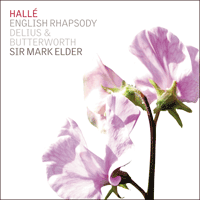 ‘Emotions run deep in this haunting music … Elder’s communicative approach, allied to his sophisticated control of texture and probing harmonic sense, lend Butterworth a decidedly contemporary resonance and cosmopolitan outlook’ (Gramophone)
‘Mark Elder has been working wonders at the rejuvenated Hallé with a silky string sound that is ideally suited to this music’ (Classical.net)» More

George Butterworth (1885-1916) was perhaps the most gifted of the British composers who were killed in the First World War. The Two English Idylls of 1910-1911 is his first surviving orchestral work and was first performed in Oxford in 1912. The delicacy and skill of his orchestration distinguish these folk song-based rhapsodies. In the first, three tunes are used, Dabbling in the dew, Just as the tide was flowing and the lively Henry Martin. All were collected by Butterworth in Sussex. Woodwind features predominantly in this score. In the second idyll only one folk song is used, Phoebe and her dark-eyed sailor (also collected in Sussex). Solo oboe plays the theme, with two bassoons accompanying. This is a slower, quieter and more meditative idyll, but with a strong climax before solo violin and solo clarinet in canon lead the piece to a gentle close.

Butterworth set eleven of A. E. Housman’s A Shropshire Lad poems in two cycles in 1909-1911. In 1911 he composed an orchestral rhapsody which he first called The Land of Lost Content and then The Cherry Tree before settling on A Shropshire Lad. It is an epilogue to his two sets of songs, the intention being ‘to express the homethoughts of the exiled Lad’. The chief theme is taken from his setting of ‘Loveliest of Trees’. This is heard on solo clarinet after an evocative quiet introduction in which a four-note figure in thirds, alternating between clarinets and violas, is heard above a quiet A minor chord for muted strings. Thereafter other vocal lines of the song are quoted instrumentally and a passionate climax is reached. The coda re-states the introduction and a solo flute quotes from his setting of ‘With rue my heart is laden’. A Shropshire Lad was first performed at the Leeds Festival on 2 October 1913 conducted by Arthur Nikisch. It is now almost impossible to hear this potently nostalgic work without thinking of ‘the lads that will die in their glory and never be old’, like Butterworth himself.

His last completed work was a third folk song idyll, The Banks of Green Willow. He collected two versions of the tune in Sussex. We hear it first on clarinet. A maestoso section is followed by Green Bushes on solo oboe. Again, the delicacy and clarity of the scoring are outstanding. The first performance was on 27 February 1914 at West Kirby, Cheshire, conducted by Adrian Boult, his first concert with a professional orchestra. The first London performance on 20 March 1914 was the last time Butterworth heard his own music.

The first music by Delius—his Sea Drift—to be heard in Manchester was not played by the Hallé but by Thomas Beecham’s New Symphony Orchestra which gave a concert in the Free Trade Hall in December 1908 the night after Hans Richter and the Hallé had given the first performance of Elgar’s First Symphony. Yet it was not Beecham who conducted the Hallé’s first Delius in November 1911 but the German Oskar Fried, a distinguished Mahlerian. He conducted Brigg Fair, which had been shown a few years earlier to Richter, who glanced through a few pages of the score and flung it away exclaiming, ‘That is no music!’ Subtitled ‘An English Rhapsody’, Brigg Fair is a set of variations on an English folk song which Delius’s friend the Australian composer and pianist Percy Grainger had collected in Lincolnshire in 1905. The song tells of a country youth ‘for love inclined’ who sets out for the fair on an August morning to meet his sweetheart.

Delius wrote his rhapsody—which he dedicated to Grainger—in 1907 for a large orchestra including six horns and bass clarinet. It begins with a slow introduction which conjures up a lazy, hazy August morning. Flute, harp and strings hint at the theme, which is then played in full by oboe and repeated by flute. After the strings have taken up the theme, the variations begin, some blithe and carefree, others more passionate. The bass clarinet has a solo in a quicker variation. Bells begin to chime as the music flares to a climax. Over a drum-beat and the return of some of the woodwind sounds from the introduction, the music seems to be gradually receding but some quicker variations follow before a climax depicts the noise and excitement of the fair, with the theme treated grandly. Slowly the excitement subsides and the oboe imbues the theme with a nostalgic melancholy.

Grainger’s haunting setting of the folk song is for tenor and unaccompanied chorus. It was first performed at the Brigg Festival on 7 May 1906 when the soloist was the great English tenor Gervase Elwes.

Irmelin, a love-story based on Scandinavian legend, was Delius’s first opera, composed in 1890-1892 but not performed until 1953, nineteen years after his death. The Irmelin Prelude is not the overture but a separate miniature tone poem. In 1931, blind and paralysed and working with his young amanuensis Eric Fenby, Delius wanted to salvage something from his youthful opera. He took four themes from the original preludes to Acts 1 and 3 and composed this exquisite piece, a distillation of Delius the poet of the bloom that once was on the hour. A similar mood prevails in The walk to the Paradise Garden, an entracte from his opera A Village Romeo and Juliet, first performed in Berlin in 1907. Delius had expanded the piece before the premiere when it was found that more time was needed for a scene-change. The Paradise Garden is a riverside inn, setting for the opera’s final scene. The village lovers, children of rival farmers, decide that happiness is unlikely to be theirs on earth. After a walk together, they take a boat moored near the inn, drift to the centre of the river and sink it, drowning in each other’s arms. The music of the intermezzo is a summary of the spirit of the opera, pastoral, impassioned and tragic. The scoring is sheer magic.

It was at a music festival in Brigg, Lincolnshire, in 1905 that the 23-year-old Grainger first heard the voice of a 72-year-old farm bailiff Joseph Taylor. A new class had been included called simply ‘Folk Songs’ and Grainger was captivated by the songs and the singing of the four old men who entered. He immediately grasped the importance of preserving this precious material and began noting down words and music at once. Taylor also sang him the only two verses he could remember of a haunting song he had learnt as a boy from a gypsy woman—Brigg Fair.

Grainger returned for the 1906 Festival armed with some of his arrangements and a phonograph with which he recorded Taylor singing Brigg Fair and many other songs, culminating in an invitation to the London studio of the Gramophone Company to record him singing, the first time a folk singer had ever done this. The recordings were made over three sessions in June and July 1908 and nine of the songs, including Brigg Fair, were released. Grainger described Taylor at the time: ‘Though his age was 75 his looks were those of middle age, while his flowing, ringing tenor voice was well nigh as fresh as that of his son … nothing could be more refreshing than his hale countrified looks and the happy lilt of his cheery voice’.