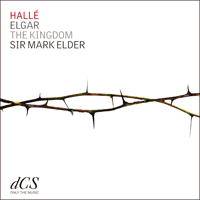 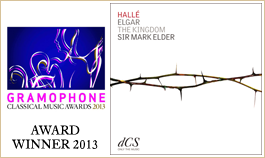 ‘Elder clearly believes in every note of this noble edifice and his unforced, coherent conception has a thrilling ring of conviction about it’ (Gramophone)
‘The choral and orchestral writing, especially as delivered here, have rousing climaxes that compensate for more routine Elgariana padding. Worth discovering even if it's not his top work’ (The Observer)
‘Elder carries off the remarkable feat of binding the loose episodic structure of the oratorio into a convincing whole; his choir and orchestra respond magnificently to his inspired direction’ (The Sunday Times)

The Kingdom, the last of Elgar’s oratorios, is the sequel to The Apostles (first performed in 1903) and shares several themes with it. A projected third part, The Last Judgement, intended to make a trilogy, was abandoned. Work began on The Kingdom in 1901-02 when it and The Apostles were conceived as one work, but most of the oratorio as we know it was composed in 1905-06, a period during which Elgar came close to suffering a nervous breakdown. It was performed for the first time at the Birmingham Festival on 3 October 1906, with Elgar conducting.

Elgar compiled his own texts for both The Apostles and The Kingdom, with Bach’s Passions as his model. The former deals with the choosing of the disciples by Christ and their reactions to his death while The Kingdom is concerned with their work for the Church in Jerusalem. ‘The whole thing is intentionally less mystic than The Apostles’, Elgar wrote to his friend A.J. Jaeger (‘Nimrod’). ‘The men are alive and working and the atmosphere is meant to be more direct and simple.’ The music is less complex and more consistent in style than that of its predecessor with much use made of representative themes or leitmotifs. There are signs in The Kingdom of growing personal introspection, of the autobiographical clamour which was to find musical expression in the outpourings of the two symphonies and the Violin Concerto.

The Kingdom is episodic, by design or intention, and its impact is inevitably less sensational than that of The Dream of Gerontius because its subject-matter is less dramatic. But the choral writing is even finer than in the earlier work, playing a more significant role in the design of the oratorio. The expressive range of Elgar’s writing for voices in The Kingdom is perhaps its greatest glory even to the extent of overshadowing the marvellously apt orchestral writing which is so good as to be unobtrusive. The choral passages have the strength and sweetness which were Elgar’s hallmark and which lift him above his contemporaries. Only the most die-hard anti-Elgarian could be unmoved by the Mystic Chorus’s ‘When the great Lord will’, by the splendour of ‘O ye priests!’ and its unexpected and effective dying fall, by the brilliance of the opening scene in the Pentecost section, with the grand striding theme ‘He, Who walketh upon the wings of the wind’ and the later agitated questionings of the people ‘What meaneth this? … These men are full of new wine’.

The duet for the two Marys which occupies the whole of the second section, At the beautiful gate, is a passage of exquisite sensitivity with a superb orchestral accompaniment, while the noble solo for the bass (Peter) in the third part contains the unforgettable passage ‘Your young men shall see visions and your old men shall dream dreams’, a passage as deeply moving as a comparable one in The Music Makers. The soprano’s famous ‘The Sun goeth down’, after the arrest of the Apostles, which begins as a self-communing of peculiar intimacy and rises to a passionate declamation of faith, is a tremendous dramatic scena on an operatic scale.

‘Jerusalem’ Prelude
The Kingdom begins with an extensive prelude, opening vigorously (allegro maestoso) with a combination of two themes which, in The Apostles, represented the Gospel and its Preachers. This is immediately followed by the Apostles’ theme itself. Trumpets insist upon a three-chord motif associated with Peter. This theme is repeated six times, leading into a section in which music from The Apostles depicting Peter’s denial of Christ and his consequent remorse is recapitulated. (Listen for the four horns introducing the ‘remorse’ passage.) As this episode ends, the Apostles’ motif modulates into D flat for a striking new melody for strings, consolatory and aspiring (andante, dolce e solenne). This is the theme of the ‘New Faith’ and it has a tender subsidiary theme. Both are repeated by full orchestra. Following their climax, and a pause, two new melodic fragments are heard, giving way to yet another theme, devout and prayerful, which will be heard again towards the end of the oratorio.

In the upper room
The mood of contemplation is continued in the unaccompanied chorus’s ‘Seek first the Kingdom of God’. The Gospel and Church motifs respectively introduce and follow the greeting by Peter (bass) to John (tenor) and their fellow Apostles: ‘Peace be multiplied unto you’. The orchestra then elaborates the plainsong theme, O sacrum convivium, which symbolises, throughout The Kingdom, the Real Presence of Christ. Another of the work’s memorable leitmotifs is heard when Peter sings ‘Where two or three are gathered together in My Name’. The words ‘in My Name’ are accompanied (cor anglais and two cellos) by the progression which represents Christ, the Man of Sorrow.

The disciples and the two holy women, Mary (soprano) and Mary Magdalene (mezzo-soprano), reminisce about Jesus in an intimate section based almost wholly on themes familiar from The Apostles. But the ‘Real Presence’ theme is heard again when Peter describes Christ’s breaking of bread at the Last Supper. This part of the scene ends with an enchanting orchestral postlude before Peter abruptly declaims ‘Men and brethren’, reminding the Apostles that they must now cast lots to choose a successor to Judas. Matthias is selected and a long contrapuntal ensemble for soloists and chorus leads into the choral set-piece ‘O ye priests!’

At the beautiful gate (The morn of Pentecost)
The two Marys sing of the miracles which Jesus worked. Most of the themes are from The Apostles but are treated in a fresh and appealing manner.

Pentecost (In the upper room—Solomon’s porch)
This is the most complex and impressive movement. The unaccompanied male chorus ‘When the great Lord will’, is answered by the Mystic Chorus’s comments illustrated by a richly coloured orchestral accompaniment and by contributions from the male soloists. The ‘rushing of a mighty wind’ and the ‘tongues of fire’ are graphically illustrated; and next comes the majestic tune for the male chorus (representing the disciples): ‘He, Who walketh upon the wings of the wind’. The bewilderment of all present in the upper room is symbolised by syncopations and agitated rhythms, through which the ‘wings of the wind’ melody marches undeterred.

Peter’s great solo aria follows. He begins by quoting Christ’s words, the orchestra thunders a majestic version of the ‘Peter theme’ from the Prelude, and he declaims: ‘Ye men of Judea … give ear unto my words’. To music that is successively dramatic, moving, dignified and devout—with effective use of the ‘New Faith’ theme as he speaks of the Prophet’s visions ‘Your young men shall see visions and your old men shall dream dreams’—Peter declares his faith in the divinity of Christ. The people’s contrite acknowledgment that they killed the Prince of Life and their tremulous pleas for guidance are answered by Peter with a new melody in D major containing the important phrase ‘In the Name of Jesus Christ’. This launches an elaborate and powerful ensemble.

The sign of healing (At the beautiful gate—The arrest)
After an exquisite orchestral introduction, the mezzo-soprano (who is designated as Mary Magdalene only in Parts I and II, and not in the remaining parts) sings of the Apostles’ teaching and of their ‘many wonders and signs’. We then ‘witness’ one of these acts, the healing of the lame man by Peter ‘in the Name of Jesus Christ’. A menacing phrase on the orchestra changes the mood as the mezzo-soprano tells of the arrest of John and Peter because they proclaimed resurrection after death. As she sings ‘for now it was eventide’, the music takes on a rapt nocturnal character, with solo violin, divided strings, and soft chords from horns and harp. This is the introduction to the haunting soliloquy for the Virgin Mary (soprano), ‘The sun goeth down’. It is in three sections, the first quiet and self-communing; the second ecstatic and exultant as she proclaims that ‘the Gospel of the Kingdom shall be preached in the whole world’; the third a return to the calm of the opening. This aria is not merely the emotional highlight of The Kingdom, it is one of Elgar’s finest inspirations.

The upper room (In fellowship—The breaking of bread—The prayers)
After a brief introductory choral section, the finale begins with a description by Peter and John of their interrogation and release. This is constructed from most of the significant leitmotifs. It is followed by a vigorous allegro maestoso chorus which gives way to a more sustained and elevated episode describing the Apostles’ eucharist. The ‘Real Presence’ theme returns as the foundation of this section.

The oratorio ends with a setting of the Lord’s Prayer. This rises to a fervent climax and, after the gentle ‘Amen’, the ‘New Faith’ theme returns while John sings of the spirit of adoption. After the words ‘Abba, Father’, the devout, prayer-like theme from the Prelude returns, with the ‘New Faith’ theme floating like a benediction.