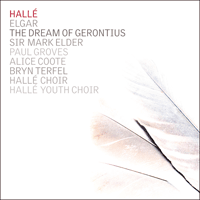 The Dream of Gerontius

‘It is, by a mile, the best-sounding Gerontius we have had, handsome in its depth and breadth with great spatial perspectives and a wonderful sense of how the score is layered’ (Gramophone)
‘The orchestra and chorus are wonderfully imposing, and Elder's performance never lets you forget this is a work built out of quasi-operatic dialogues … Coote's performance is a marvel’ (The Guardian)

Elgar’s setting of Cardinal Newman’s 1865 poem The Dream of Gerontius occupied a central place in his life and work. Its genesis brought him pain and anguish even though, throughout its composition, he was in a state of exultation. The first performance—at the Birmingham Festival in 1900—was wretched and Elgar became despondent. Yet at Düsseldorf, in the following two years, and later in Manchester, Sheffield, Worcester and Hanley, it was revived in glory and within the first decade of its existence it had established itself with choral societies on a par with Handel’s Messiah and Mendelssohn’s Elijah. A succession of famous singers have made the solo parts of Gerontius, Angel and Priest and Angel of the Agony very much their own.

When Elgar completed the full score in August 1900, he added at the end a quotation from John Ruskin’s Sesame and Lilies: ‘This is the best of me … this I saw and knew: this, if anything of mine, is worth your memory’. It echoes what he wrote privately to a friend after completing the ‘Praise to the Holiest’ chorus: ‘I think you will find Gerontius far beyond anything I’ve yet done—I like it—I am not suggesting that I have risen to the heights of the poem for one moment—but on our hillside night after night … I’ve seen in thought the Soul go up, and have written my own heart’s blood into the score’. As so often, Elgar linked his music and its inspiration to the landscape of his Worcestershire home.

A lot of the blame for the failure of the first performance must be apportioned to Elgar. He was still correcting the score three weeks before the performance. The choir had little time to learn it properly and had several other works to rehearse too. The choirmaster died suddenly in June and his temporary successor, called out of retirement, could not cope. The conductor, Hans Richter, had only three weeks to learn the score and only one preliminary rehearsal in London and one in Birmingham. He had not realised it would be so complex and difficult. Failure was inevitable and duly happened. Elgar returned home and wrote to A.J. Jaeger (‘Nimrod’ of the Enigma Variations) who saw the score through the press: ‘Providence denies me a decent hearing of my work—so I submit. I always said God was against art and I still believe it. My heart is now shut against every religious feeling and every soft, gentle impulse for ever.’

Yet he claimed he was not unduly upset by the bad performance—after all, he was musician enough to know that these things happen. His biographer Jerrold Northrop Moore suggests that Gerontius was a wager with himself against the insecurity of the Christian faith—it was ‘the best’ of him. So if it was a triumph, it would be God’s reward. Soon it was a triumph and by 1903 Elgar was composing the oratorio The Apostles. But in 1906, after completing The Kingdom, his religious faith seems to have crumbled. He attended Mass infrequently and wrote no more religious music on a big scale. In his last years he told his doctor: ‘I have no faith whatever in an afterlife. I believe there is nothing but complete oblivion.’

Yet we may accept Gerontius as an expression of a religious faith that, however personally unorthodox, was alive within Elgar. Or we may think that the subject immediately suggested music to a composer who had spent the previous decade writing sagas about heroes and heroics. In Gerontius he found the saga to end all sagas, about a man like himself, ‘no end of a worldly man in his life and now brought to book. Therefore I’ve not filled his part with church tunes and rubbish but a good healthy full-blooded romantic remembered worldliness.’ Moreover, a man about to journey into the unknown which lies beyond life was something Elgar ‘saw and knew’, for he often spoke of wishing he were dead.

The musical idiom of Gerontius is familiar to us today, but imagine how revolutionary it must have seemed to that first audience. Yet Elgar was not an avant-garde composer. He was fortunate in having a particularly individual tone of voice but he belongs to the world of Brahms, Wagner, Saint-Saëns, Gounod and, among his contemporaries, Richard Strauss. But no English religious choral work had sounded so operatic, so much like a tone-poem, as the first part of Gerontius; and never had the orchestra played such a prominent role.

Point after point is etched into our minds by vivid instrumental detail (the oboe solo which accompanies the words ‘Manhood crucified’, for example) and it is the marvellous scoring—hollow, solemn, mystical—of the opening bars of the Prelude which takes us into the dying man’s room and into the intensely spiritual atmosphere of the music. But the choral writing is equally fine, designed specifically for the acoustics of the great West Country cathedrals Elgar knew so well. The first entry of the unaccompanied semi-chorus with ‘Kyrie eleison’ is an experience that constantly surprises and thrills the listener. In the ‘Go forth’ chorus at the end of Part One, the sound is ‘layered’, passing effortlessly from the full-throated majestic melody to the thinned-out ethereal voices which precede the bass soloist’s final quiet prayer. In Part Two there is the ecstatic hymn of the Angelicals, ‘Praise to the Holiest in the height’, and the snarling, dissonant Demons’ Chorus which gave the Birmingham choir such trouble in 1900. Nothing like that had been heard in British choral music.

Part One
The themes we hear in the Prelude recur throughout the work. They represent Judgement, Fear, Prayer, Sleep and Pain. The Prayer theme is built to a grand climax and is followed by a broad march-like melody later to be associated with the Priest. The Prelude leads into a long monologue in which Gerontius expresses his fear of death and of what may follow. His friends offer prayers and Gerontius now sings his great (almost Verdian) ‘Sanctus fortis’, with rich chromatic effects in the orchestra. The effort exhausts him and his fears return of a ‘sense of ruin, which is worse than pain’. The chorus beseech his rescue and, in plainchant, recite the names of those to whose aid God had come. Gerontius sings the exquisite phrase ‘Novissima hora est’ (The final hour is here) and dies without completing his last prayer. A strong chord in wind and brass introduces the Priest’s solo: ‘Go forth upon thy journey, Christian soul’. As the chorus joins in, the music becomes increasingly exalted and incandescent.

Part Two
A new and rarefied atmosphere is established at the start of Part Two. The beautiful short prelude for strings tells us that we have now left earthly things behind. Gerontius, having made his transition to the afterlife and now described as the Soul, hears no more the ‘busy beat of time’ and feels ‘an inexpressive lightness’. He is also conscious of another presence: ‘Someone has me fast within his ample palm’. The orchestra hints at an alleluia motif, so that when the Angel enters we seem, like Gerontius, to have already experienced this moment, an uncanny effect. Gerontius’s questions and the replies of his guardian angel, taking the Soul to heaven, are accompanied by most of the leading themes, but his state of ‘serenest joy’ is disrupted by the violent, percussive and fugal music of the Demons’ Chorus.

This chorus provides the first contrast to the prevailing tranquillity and as it dies away into sullen muttering Gerontius asks if he will see his God. Yes, for one moment, the Angel replies, but warns him that the experience will ‘pierce’ him and tells him of St. Francis’s and Christ’s stigmata. As the Angel’s solo ends, we hear, borne as if by a breeze, the Angelicals’ voices singing ‘Praise to the Holiest in the height’ in the work’s most elaborate choral episode. Elgar spaces it out, following its first stanza with another dialogue between the Soul and the Angel before embarking on the glorious extended setting.

The Soul is now in ecstasy: ‘The sound is like the rushing of the wind … among the lofty pines’. The hymn attains its mighty climax, its last note leaving the organ and timpani throbbing in the depths. The Soul of Gerontius hears the voices he left on earth and the Angel tells him that the Angel of the Agony (who was with Jesus in the Garden of Gethsemane) will plead for him before the Judgement Throne. After this magnificent bass solo, as Gerontius prepares for judgement, the voices of his friends implore mercy and the Angel utters a final triumphant ‘Alleluia’. The Judgement theme is intoned by the orchestra, accelerating to what has been called a ‘blinding flash’ representing the momentary vision of God. At this the Soul cries out ‘Take me away’ and sings resignedly of his forthcoming sojourn in Purgatory. The Souls in Purgatory intone the psalm ‘Lord, Thou hast been our refuge’ and the orchestra introduces a new flowing theme in D major. With the psalm as a countermelody, this beautiful tune becomes the principal refrain of the Angel’s touching ‘Farewell to the Soul’ (‘Softly and gently … in my most loving arms I now enfold thee’) before the work ends with a solemn ‘Amen’.