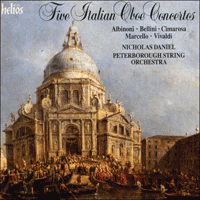 We are forever in the debt of our forebears in the Baroque period for their realization of the possibilities inherent in the concerto principle, and indeed their development of it. As a vehicle for musical composition it presented a fascinating challenge that found its ultimate expression in the solo concerto.

That the oboe should feature in many Baroque concertos is hardly surprising, not least since its penetrating timbre allows its deployment against numerically superior forces to singular effect, and its beauty of tone imparts to the solo line a distinctive and distinguished quality. Since the earliest form of the modern oboe dates from the middle of the seventeenth century, the peculiar—in the nicest sense of the word—sound of the instrument was appreciated throughout the latter half of the Baroque period.

Of the five composers represented in this recording, four were either born or died in Venice, that great North Italian centre of culture where, fittingly, the first public opera house was built in 1637. Music has for generations been an essential part of the allure that Venice has held for its myriad visitors. One of them was Friedrich Nietzsche, who later said: ‘When I search for a word to replace that of music, I can think only of Venice.’

The first two composers represented here, Antonio Vivaldi and Tommaso Albinoni, were almost exact contemporaries in their native Venice and yet, in all probability, hardly knew each other. The great J S Bach certainly knew of both of them since he paid them what in those days was the compliment of using some of their music in the composition of his own. Unlike Vivaldi, Albinoni was not associated with San Marco, nor with any of the ospedali which featured so much in the former’s life. He was of a family made wealthy from the manufacture of paper and, thus financially independent, had no need to look for work in the musical profession.

It was Vivaldi whose thrusting imagination developed the solo concerto from the Corellian concerto grosso with such success, and it was his concern not simply for the virtuoso aspect of the solo line, but also for the orchestral contribution, that led to this success. Vivaldi treated the accompanying orchestral passages in a rondo-like manner so that they returned, after each new flight by the soloist, to provide a logical and clear formal scheme. So significant was this idea that Bach himself happily embraced it.

The combination of grace and strength which informs so much of the music of the late Baroque is reflected in Vivaldi’s C major Concerto. The striding themes are propelled and supported by a buoyant accompaniment that has a significant part to play in the overall effect of the work. The central Larghetto once again illustrates the great Venetian’s sensitivity as a lyric poet, as does the concluding Minuet of his powers of invention. Throughout the work the wonderfully decorated and developed solo line is entrancing. Not the least that could be said of Vivaldi is that no one ever made scales sound more graceful.

Though not quite of the stature of his contemporary Vivaldi, Tommaso Albinoni was, with Vitali, Veracini, Geminiani and Locatelli, among the great virtuoso violinist-composers of the new school of instrumental music. Being brilliant performers, their love for their instruments knew no bounds, and soon the path that led towards the solo violin concerto became a broad avenue which led to the adoption of other instruments in a soloistic capacity.

Albinoni’s D minor Concerto is cast in the by now accepted three-movement fast-slow-fast format. The music exudes confidence and makes skilful use of sequence and judicious repetition to produce a satisfying formal scheme. The Adagio second movement has a Handelian breadth about it which is, perhaps, an indication of how much the great German assimilated in his Italian travels. From such expressive music as this we can appreciate why it was that Italian music and musicians came to cast so wide an influence on the musical world in the eighteenth century. The final Allegro provides an exciting and delightful conclusion to a work brimming with the sheer joy of music-making.

The Oboe Concerto of Vincenzo Bellini is numbered among the works of his student days along with much church music and several symphonies. The symphonies were but in name since at the time of their composition (the early 1820s) Beethoven was virtually unknown in Italy and Bellini was to hear the great master’s symphonies only years later, in Paris. Since Bellini’s fame rests on his operatic works, such early pieces as the Oboe Concerto could easily have been overlooked were it not for their attraction. The Sicilian composer was no pioneer, but he had made a close study of the chamber music of Haydn and Mozart and learned much from it.

The stately opening of Bellini’s E flat Concerto leads to an aria-like oboe line of the type that was to influence Chopin in the lyrical expansion of his own instrumental melodies. The orchestral sections carry Viennese echoes, but the overall spirit of the work is undoubtedly Italian. Bellini’s juxtaposition of lyrical and more rigorous passages gives the little work an expertly managed inner balance.

The noble Marcello brothers were distinguished sons of Venice. Alessandro, two years older than Benedetto, was a philosopher and a mathematician as well as a composer. He died in 1750, the same year as Bach. His D minor Oboe Concerto reflects the familiar and civilized language of the Baroque and thus provides an interesting comparison to the contrasting moods of the later style of Bellini. Marcello maintains a ‘single affection’ within each movement, where contrasts of texture and volume are wrought, but not of senti­ment. The Adagio is notable, apart from its general ambience, for its upwardly-spiralling oboe theme, enhanced by distinctive ornamentation. The final Presto is delightfully light and fleet-footed and provides a felicitous ending to a most engaging piece.

Domenico Cimarosa was born the year before Bach died, and died in the same year in which Bellini was born. He produced the first of a large number of operas in 1772 and his reputation soon gained him performances in London, Paris, Vienna and Dresden. In 1787 he was invited to St Petersburg by Catherine II, and later succeeded Salieri as Kapellmeister to the Austrian court in Vienna. Cimarosa returned to his native Naples in 1793 and was appointed Maestro di Cappella to the king, and teacher to the princesses. His fortunes were to change dramatically, however, when he succumbed to the revolutionary fervour which accompanied the victory march of the French republican army into Naples in 1799. Cimarosa was imprisoned for his pains and sentenced to death, but happily reprieved on condition that he left Naples. He began a return journey to St Petersburg which was never concluded since he died, en route, in Venice.

An appealing Larghetto section introduces the listener to the Cimarosa Oboe Concerto which has been brilliantly arranged for modern performance by the Australian-born composer, Arthur Benjamin. The Larghetto leads into an Allegro which makes a delightful reference to the Italian opera buffa; this is followed by a Siciliano whose lovingly-drawn solo line soars over the insistent dotted rhythm that characterizes that graceful dance form. The Concerto ends with an ‘Allegro giusto’ whose perky repeated notes add to the exuberant mood of the music. Here elegance and style are combined, literally with Baroque echoes, to heart-warming effect.

The oboe as a solo instrument has had a distinctly chequered career. It could be said that it’s popularity peaked during the Baroque era after which it declined and has only recently, in historical terms, come back to being thought of as anything other than an orchestral instrument. Indeed its present popularity with composers rivals the Baroque era and augurs very well indeed for its future.

This seems, therefore, an ideal time to assess how we interpret our wonderfully rich Baroque repertoire on an instrument with an utterly different sound from the one envisaged by the composers represented on this recording.

I personally have enjoyed the present revival of Baroque, Classical and later music played on instruments designed when the music was written. It has made our time an ideal one to evaluate how much of our modern personality and pace of life we have imposed on the music of an era none of us experienced. It brings to the very front of our minds the whole question of how we can be sure to perform the music as the composer felt it—nothing more nor less than that.

The ‘original instrument’ performers have an advantage. The sounds their instruments naturally make lead them to phrase and interpret in the right way, while we, with our more complicated, thicker and louder machines, have to pare off layers of accumulated dirt before we too can reveal the music with its true clarity and vivacity. However, I believe that, with an ear cocked towards the truth inside the music, and with the invaluable insights provided by our ‘period instrument’ colleagues, we can achieve the most satisfying results in interpreting this marvellous repertoire on our own contemporary instruments.