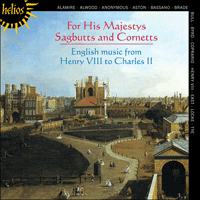 In the early sixteenth century the playing of wind instruments was traditionally the domain of German and Flemish musicians, but when a storm forced King Philip the Fair to put ashore in England, along with his considerable musical retinue, Henry VIII was inspired to expand The King's Musick. By the end of the century, the situation was reversed: England was the nation to which all others aspired and her players were to be found across Europe.

The music on this recording comes from this glorious period of pageantry and national pride, and fully displays the enchanting sound and virtuosic scope of the cornett and sackbutt, remarkable instruments seldom heard today.

In January 1506 the flotilla of Philip the Fair, the Hapsburg King-Archduke, was driven into ports all along the south coast of England by a fierce storm which claimed two of the fleet’s ships. Among Philip’s retinue was one of the finest music institutions of the day, the Burgundian Chapel under the direction of the composer Pierre de La Rue. This ensemble comprised not only singers but also instrumentalists, including some of the best wind players in Europe. This profession had been traditionally dominated by the Flemish and Germans, and foremost among Philip’s wind players was the famous cornettist Augustein Schubinger.

Philip was taken from Melcombe Regis to Windsor where he met King Henry VII and his son the Prince of Wales, the future King Henry VIII. Katharine of Aragon would have looked forward to seeing her sister, Philip’s beautiful but madly jealous wife, Juana. During the three months Philip and Juana spent in England while the fleet was refitted, ties between the Tudors and the Hapsburgs were cemented into strong alliance, and it appears that Philip and Prince Henry particularly enjoyed each other’s company. It was a time of feasting, jousting, tennis, dancing, wrestling and music, and this experience probably fuelled young Henry’s strong attraction to Burgundian pageantry, in which the wind ensemble played a crucial role. This chance meeting was to have a profound effect on the prospects for trade and diplomacy, and may also have inspired Henry VIII’s great expansion of The King’s Musick when he succeeded to the throne three years later.

Henry had some assistance from Hapsburg musicians in establishing his new wind ensemble. The sackbut player Hans Nagel had worked in England during Henry VII’s reign, and in 1516 helped to engage the services of four ‘sagbuts’ for Henry VIII from his home in Mechlin. Nagel’s colleague, a Hapsburg music copyist who called himself ‘Alamire’ (meaning ‘A below middle C’) also worked from the Netherlands for Henry VIII as a diplomat and instrument supplier. As well as providing beautiful music manuscripts for Henry’s chapel, in 1517 he procured for Henry’s Flemish minstrels eight cornetas, presumably the same instrument which Augustein Schubinger had brought to a new level of perfection in Philip the Fair’s Burgundian chapel.

The members of the wind ensemble must have been on their mettle in dance music, for it was usually extemporized, the bassedance being the most popular dance at court, a display of elegance, restraint and power. While the steps of the dance are extremely simple, it was said that only those who were ‘heavenly-gifted’ could step it well. The skill appears to have been in the demonstration of the ease and nonchalance of nobility, executed to the contrasted accompaniment of the wind band’s exciting, ‘hot’ music, as the liveried minstrels in the balcony puffed, blew and worked their instruments. The contrast between majestic passivity and ignoble display is even more apparent in the dance arrangements. While the melodies of the songs T’Andernacken op den Rhijn and En vray amoure can be heard in the majestic long notes of the tenor (the ‘king-post’ of the structure), the other instruments play rapid passagework, the scatty and exciting additional voice in five- and six-part arrangements playing little functional role and sometimes being called the Vagant or ‘vagrant’. Even the instrument’s French name sacqueboute, adopted by the English, contributed to the image of the minstrels’ exciting but dishonourable labour, being derived from the French words sacquer, ‘to remove violently’, and bouter, ‘to shove’. These compositions give a refined impression of the sort of thing that wind players once extemporized on occasions of high ceremony from the haute place, the balconies of the Great Halls of Greenwich, Richmond and Hampton Court.

Ceremony in the Great Hall was not, however, what it used to be, for even in the reign of Henry VIII the monarch seldom kept Hall. At Henry’s new palace at Hampton Court the processional route for honoured guests did not even pass through the magnificent Great Hall; the monarch now received them directly into the more comfortable and privileged apartments. With the decline of the Hall, the wind players of the Tudor court, as elsewhere in Europe, adapted their style to become more literate, gentle and ‘solemne’ in order to leave the balcony and follow the patrons, the source of all favour, into the more privileged spaces.

It has been suggested that the In nomine, a mid-sixteenth-century genre of solemn, instrumental music, had a function in pre-Reformation aristocratic ceremony. (Like the bassedance, the In nomine is based on a slowed-down pre-existing melody, in this case the plainchant Gloria tibi Trinitas. In most of the examples recorded here this tune is heard in the alto part.) Wind instruments had long been associated with the regimen of the meal table, with the minstrels placed in the balcony, far from the top table. As the Hall fell into disuse it became common for the patron to eat in the exclusive Privy Chamber, leaving the doors open, however, to hear the wind band playing next door in the Presence Chamber. It might have been in such a setting that the patron displayed the competence and refinement of the musicians to a guest in the formally composed counterpoint of the fantasia, a dramatic contrast to the old role of the balcony minstrel jamming in a bassedance. Some wind players even turned their hand to composition in the court style, gaining the sort of honour unthinkable for pipers a century before. The brothers Augustine and Jerome Bassano—the ‘bretheren Venetians’—seem to have been especially favoured at court, perhaps surprising in view of the fact that they, like many of Henry VIII’s instrumentalists, were Jews at a time when England was closed to Jews and anti-Semitism was rife.

By the end of the sixteenth century the British school of brass playing was famous enough for Charles III, Duke of Lorraine, to send his cornettist in search of British recruits, one of whom turned out to be John Adson, composer of masking ayres, flautist and later cornettist to the English crown. English dance music became quite fashionable in Germany at the beginning of the seventeenth century, so that although William Brade’s 1617 collection of dance music contains mostly English masque tunes, it was produced in Hamburg where Brade enjoyed better working conditions than England could afford him.

John Bull, the most intriguing of the English virginalists, also fled his native country (for religious reasons after drawing suspicion on himself for his Catholic faith) and spent his final years in exile in Antwerp. Though not a learned man—he spoke no Latin—he attained favour at court and was appointed the first Professor Music at Gresham College on Queen Elizabeth’s recommendation. If music can give a clue to character then Bull was an intense and eccentric man. The Fantasia recorded here makes use of traditional virtuosic figuration though in a quite avant-garde manner, Bull’s bizarrerie most evident in the florid climax over a six-note chromatic ostinato.

During the years before the Commonwealth cornetts and sackbuts were to be heard in English chapels and cathedrals accompanying anthems. This practice aroused some suspicion, as the grandeur evoked by the wind players was considered too ‘popish’, and periodic attempts were made to curb their use in church; the Civil War effectively silenced the bands.

When the monarchy was restored in 1660, King Charles attempted to revive the ‘Royal Windy Musick’ but standards of cornett playing had fallen during the Interregnum, and musical style and fashions were changing rapidly. The musicians of the English court staged an ‘English opera’, Psyche, in competition with the fashion for French opera, using the instruments at which the English used to excel—cornetts, recorders, shawms and sackbuts. The experiment was not a success, and the payment records show how the Royal Wind Musick gradually dwindled as the players died or retrained as players of violins and oboes. Locke’s Musick for His Majestys Sagbutts and Cornetts is the masterpiece of early English wind music, and the two suites in five parts (performed here in the recent reconstruction by Timothy Roberts) and the accompanying six-part Pavan-Almand represent the culmination of that tradition.