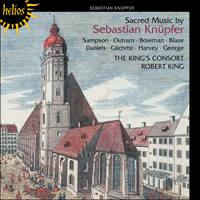 Sebastian Knüpfer is yet another Baroque composer whose reputation and popularity have been overshadowed by J S Bach. Little of Knüpfer's music has previously been transcribed from its many manuscripts, let alone published. However, in his day Knüpfer was a respected and highly sought-after composer; his compositions were admired by his contemporaries and, according to his obituary, he 'composed quotations of the Psalms and other Biblical books with such sweetness and skilfulness that he delighted even the saddest hearts, and his name is spoken with admiration not only in Leipzig but also outside'.

As we have come to expect from Robert King and his King's Consort, the performances are of the highest standard with some of the finest singers on the early music platform today.

‘There is no respect in which the vocal and instrumental performances or the recording fail to do justice to a composer whose revival is long overdue. I strongly recommend you to discover this for yourselves. Bravo, Hyperion! … the second release in the Bach Contemporaries series reveals a composer of imagination and flair. The King's Consort give these rarities outstanding performances’ (Gramophone)
‘Thrilling to the senses. This is an auspicious continuation of a series which deserves to do very well indeed’ (BBC Music Magazine)
‘Performances are excellent. Highly recommended’ (Early Music Review)
‘Robert King draws fine singing and playing from his ensemble. The soloists are uniformly excellent … Knüpfer is a real discovery—full marks to all concerned … the combination of education and pleasure is irresistible’ (International Record Review)
‘Beautifully executed’ (Classic CD)
‘The performances are immaculate’ (Fanfare, USA)
'Recomendados' (CD Compact, Spain)

Throughout the seventeenth and eighteenth centuries the position of the Thomaskantor in Leipzig (organist and choirmaster of the Thomaskirche) was one of the most respected and important musical posts in central Germany. An unbroken chain of fine musicians, appointed by the City Council but whose fame in their time stretched far beyond the boundaries of Leipzig, reaches from Seth Calvisius to Johann Hermann Schein, Tobias Michael, Sebastian Knüpfer, Johann Schelle and Johann Kuhnau up to Johann Sebastian Bach. Simply by looking at the legacy of these composers one can draw a representative picture of the Baroque music world in central Germany. Unfortunately, however, with the exception of Schein and Bach their fame did not survive as their works have been decimated over the years, and most of the few surviving pieces have not been reconstructed in new editions.

The high standard of seventeenth-century sacred music in Leipzig is perhaps best illuminated by Sebastian Knüpfer’s compositions. Born in 1633 in Asch, Vogtland, the son of a cantor, Knüpfer received his first musical education from his father. At the age of thirteen he was accepted at the renowned Gymnasium Poeticum in Regensburg, where he remained for eight years. In Regensburg, Knüpfer was highly active in musical circles, but was also known for his profound knowledge of philology and poetry. After finishing his schooling he went to Leipzig, probably to study there; strangely, though, his name does not appear on the matriculation register. From this period we have evidence only of his non-compositional activities: he sang as concertist in performances of the Thomaskantor Tobias Michael and additionally taught music. The musical qualities of the young Knüpfer must soon have been noticed in Leipzig for, after the death of Tobias Michael in June 1657, he was appointed Thomaskantor at the age of only twenty-four. Appointing Knüpfer was a wise decision: thanks to his commitment, Leipzig’s sacred music enjoyed a splendour and magnificence that was formerly unknown. Handwritten copies of Knüpfer’s sacred works circulated throughout the entire German-speaking area and became desirable collectors’ items, thereby spreading the fame of the composer and his post. After nineteen years of fruitful work, he died on 10 October 1676 at the age of forty-three.

Knüpfer’s contemporaries admired him for his great erudition, which is also demonstrated in his expressive compositions. According to his obituary, he ‘composed quotations of the Psalms and other Biblical books with such sweetness and skilfulness that he delighted even the saddest hearts, and his name is spoken with admiration not only in Leipzig but also outside’. When one looks at the scores of Knüpfer’s vocal works, it becomes evident that this tribute is not made of empty words. The compositions present an exceptionally high degree of compositional elaboration, musical inventiveness and sensitive text interpretation. Furthermore, many of Knüpfer’s works possess a certain dignity and grandezza which make their creator—from a modern point of view—one of the greatest composers of his time. They belong, in the words of the music historian Alfred Einstein, to those apparently fossilized musical monuments that merely require a magician and his magic spell in order to burst back into life.

The Christmas concerto Vom Himmel hoch, da komm ich her (‘From heaven on high I come here’) is one of Knüpfer’s late works, as are probably all his grandly scored sacred concertos. On the copy, which is unique in the Grimma collection, is written the date 1673, which is probably when it was composed. The composition is textually based on a free combination of chorale lines and Biblical quotations, and arranged as a dialogue between the choir of the angels, set for three sopranos and three violins, and the choir of the shepherds, scored for three lower vocal and three instrumental parts. The two choirs unite towards the end of the work in a concluding chorus, praising God. Knüpfer symbolizes the otherworldly quality and unfathomable beauty of the angelic song by a rigorous canon set to the words ‘Ehre sei Gott in der Höhe’ (‘Glory to God in the highest’).

The chorale cantata Was mein Gott will, das gescheh allzeit (‘What my God wishes, shall be always’) is one of Knüpfer’s most elaborate works. Of the four verses, based on a song, the outer ones are musically closely related to each other and scored for the full ensemble, whereas in the middle verses the vocal parts are reduced from six to three. In the outer movements the chorale melody appears as a cantus fìrmus with imitative features, containing some complex canonic settings; in the middle movements, however, the chorale is treated more freely and with greater variation.

One of the most mysterious works ascribed to Knüpfer is the chorale cantata Wenn mein Stündlein vorhanden ist (‘When my hour has come to leave’). In its musical substance, the piece is based upon a dialogue cantata by Johann Rosenmüller; however, with the exception of the introductory sinfonia and the concluding chorale, this was drastically changed in its formal character and structure. Should the present arrangement really be Knüpfer’s—the records in the Grimma collection leave few doubts about this—it is a precious proof for Knüpfer’s acquisition of the famous, harmonically rich, sonorous and even sensuous compositional style developed by Rosenmüller, which introduced a new era to the central German music of the middle of the seventeenth century.

The monumental and solemn idiom which is characteristic of Knüpfer appears clearly in the grandly scored Psalm-setting Ach Herr, strafe mich nicht in deinem Zorn (‘O Lord, rebuke me not in thine anger’). The effect of this work is not solely due to the combination of great structural skilfulness and refined, elaborate instrumentation, but also to the deliberate crossing of traditional genre boundaries. For this piece, which probably originates from the period 1670 to 1675, Knüpfer chooses the key of C minor, a most unusual tonality for that time. In addition he utilizes (alongside the obligatory five-part string ensemble) trumpets and timpani, instruments that are hardly ever heard in this key. The unusual sound quality is also due to the two ‘flutes’, although it is not absolutely clear exactly what instruments Knüpfer intended. A copy of the score in Berlin marks the parts as ‘Traversi’ flutes; however, the tessitura of the parts would result in unsolvable performance difficulties. Another copy in Dresden asks for ‘Flauti’ (recorders) and this recording follows that instruction. In the context of this composition, the symbolism of these instruments is strangely altered, almost distorted. The sound of the recorders does not stand (as it usually does) for gentleness and sweetness but symbolizes quiet humility and painful agony, and the trumpets and timpani demonstrate not God’s glory and splendour but instead portray his raging wrath and cruel mercilessness, only moderating in the unexpected, conciliatory concluding C major cadence.

Quemadmodum desiderat cervus (‘Like as the hart desireth’), set for solo bass and a small string group, stylistically belongs to an earlier period. It probably originates from the beginning of Knüpfer’s career in Leipzig; it perhaps belongs to a collection of sacred music which was to be printed in 1663, but apparently was eventually not published. The Italian influence, notably that of Giacomo Carissimi, is evident, especially in the flowing theme of the concluding triple-time movement.

A similarly dense and expressive work such as Ach Herr, strafe mich nicht in deinem Zorn is Knüpfer’s setting of Psalm 137, Super flumina Babylonis (‘By the waters of Babylon’). The gloomy text receives its great intensity from the two cornetts and three sackbuts which accompany the four-part vocal ensemble. A distinctive feature is that these wind instruments play only in the tutti sections, whereas the inner verses (performed largely by soloists) as well as the short ritornelli are played only by the five-part string ensemble. The melancholy atmosphere of the opening grows to a relentless rage and cursing of Babylon in the concluding fugato.

The chorale cantata Jesus Christus, unser Heiland (‘Jesus Christ, our saviour’) is set for five voices and five instruments, and is based on a poetic work by Martin Luther. The melody, however, originates from the pre-Reformation period. Knüpfer combines the three verses of the text with an elaborately symmetrical musical structure. The two outer movements are scored for the full ensemble, treating the chorale melody imitatively; the third verse is a variant of the first, transformed into triple time. The concerto-like, freer middle verse is framed by a dance-like ritornello.

The Whitsun concerto Die Turteltaube lässt sich hören (‘The voice of the turtle dove is heard’) was written for a performance in May 1676, a few months before the death of the composer. Despite the enormous scoring, including four trumpets, the composition presents a particularly sweet mood which demonstrates Knüpfer’s great ability to incorporate stylistic elements of Rosenmüller and various Italian composers without giving up his own monumental style. The text of the work is a dialogue, drawn from different passages of the Bible, and is mostly scored for soloists. In this way the composer skilfully saves the full splendour of the tutti for the concluding hymn of praise to the Holy Trinity.

Little of Knüpfer’s music has previously been transcribed from its many manuscripts, let alone published. The realization of this project brought together the skills and knowledge of many people. Thanks are especially due to Dr Karl-Wilhelm Geck at the Saxon State Library in Dresden, to the music librarians at the University of Uppsala and the Berlin State Library, but most of all to the patience and extraordinary transcriptive skills of Brian Clark, without whom this project could never have happened.