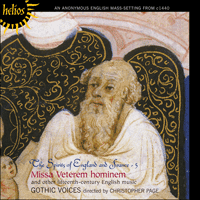 The Spirits of England & France, Vol. 5

This latest release from Gothic Voices forms a pair with the Missa Caput (CDH55284). Missa Veterem hominem is an anonymous English Mass from circa 1440. It is a work of intricate detail and great significance as one of the earliest examples of a composition for what we would regard today as a 'standard' four-part choir. It is performed here with captivating vigour and commitment.

Also included are hymns from the Sarum chant books. The presentation of these monophonic songs makes this disc an invaluable resource for anyone interested in the tunes (Christe, qui lux es, Jesu salvator, and Salvator mundi, for example) which lie beneath so many later polyphonic works by Tallis and numerous others. But if that isn't enough, they are also sung with extreme conviction and an austere yet remarkable beauty.

Missa Veterem hominem can justly be regarded as the ‘sister’ Mass to the Missa Caput which was recorded on Volume 4 of The Spirits of England and France. Volume 5 is a further development to the repertoire of Gothic Voices in the exploration of polyphonic English Masses of the fifteenth century and also includes some of the most outstanding lyrics from the wealth of Sarum chant.

Like the Missa Caput, the Missa Veterem hominem was part of a flood of English music which engulfed Continental Europe in the early to mid-fifteenth century. Both Masses turn up in the so-called ‘Trent Codices’, a series of seven manuscripts which, with some eighteen hundred pieces, is by far the largest repository of music to have survived from the first three-quarters of the century. As testimony to the remarkable breadth of interest in English music, Veterem hominem even travelled as far as eastern Silesia, or Bohemia, where it was copied into the so-called ‘Strahov’ manuscript; and if the quotation from the Mass in Morley’s Plaine and Easie Introduction to Practicall Musicke of 1597 is anything to go by its breadth of transmission was matched by its longevity, as a didactic curiosity if nothing else.

Sadly this late fragment is the only source for the Mass to have survived on its native soil: the insular copies which must once have existed clearly fell prey to the changes of fashion which, as for most English music of the period, in time rendered them obsolete for performance purposes. But for a tiny handful of manuscripts, the glorious richness which was clearly English music in the early fifteenth century is represented in England now only by pitiful fragments drawn from sixteenth-century bookbindings.

Missa Veterem hominem is fact shares a great deal more with the ‘Caput’ Mass than just English origin: indeed, so similar in construction are the pieces that they can even be called ‘sister’ Masses. Both were presumably composed around the late 1440s, and both were part of the first maturity of the cantus firmus Mass, the procedure devised in England and enthusiastically emulated on the Continent, in which each movement is built on the same borrowed melody. Both are also written for four voices with a low contratenor, a texture rare at the time but which was soon widely adopted on the Continent, and both present the cantus firmus twice in each movement in so-called ‘double cursus’ format, once each in triple and duple metre. In fact the structure and layout of Caput and Veterem hominem became the blueprint for a spate of four-voice Continental Masses in the 1450s, some of which clone their models so comprehensively that it is difficult or even impossible to determine whether their composers were English or Continental.

Even the borrowed melodies of the two Masses have features in common: both derive from antiphons and both are in mode 7 on G. As in many early English Masses, the melodies are deployed in identical rhythmic successions in each movement, though differences in the lengths of rests and duos mean that some movements are longer than others. One of the longest movements in both cases is the Kyrie, for which both Masses set the long troped Kyrie text ‘Deus creator omnium’ as prescribed for performance on all principal and major double feasts in the Sarum and other English rites.

Across the rigid armature imposed by the cantus firmus the anonymous composers lay glittering musical lines with now one voice, now another emerging above the surface of the texture and carrying forwards a succession of rhythms and sonorities. As John Caldwell has remarked, the plainsong of Veterem hominem is clothed in ‘a bold and resourceful web of melody in the three accompanying voices, closely knit without any sacrifice of clarity’ (The Oxford History of English Music, i, The Beginnings to c1715 (Oxford, 1991), p 155).

Like the Missa Caput the sheer confidence displayed by the master who wrote the Missa Veterem hominem forbids the kind of tranquil performance which fifteenth-century English music is often given today. Such a style seems to work well for some of the shorter, contemplative Marian antiphons such as Sancta Maria virgo or Mater ora filium and is almost universally used now for the music of Dunstable, but in many places the Veterem hominem master creates a contratenor line (the second voice down in the modern score) with animated and syncopated passages which recall motets of the previous century such as Degentis vita (recorded on The Medieval Romantics) and it seems essential for such music to be presented with velocity and drive.

As we rehearsed Veterem hominem and the Missa Caput we became increasingly convinced that we wished to render the music as a festive clamour, fast and loud, capturing what might have been done by four soloists, proud of their artful contribution to a major liturgical feast and, during the plainchant passages, itching to get up and make it. As with the Missa Caput we decided against a liturgical reconstruction, but to preserve the alternation of polyphony and plainsong—surely essential to a balanced experience of the polyphonic movements—we have interposed some of the most beautiful and contemplative hymns of the Use of Sarum by way of contrast. The first thirteen tracks of this recording are therefore planned as a whole.

Beginning with a characteristically taut setting from the repertoire of fifteenth-century English carols, Jesu, fili virginis, the programme continues with three monophonic pieces to accustom the listener to monody. This, it is to be hoped, will restore to the Veterem hominem polyphony some of the opulence it would have represented to its original audience.

The antiphon Doleo super te, David’s lament for Jonathan, reminds us just how many fine plainchant lyrics there are in the Sarum books, lyrics which should be viewed as so much more than historical curiosities (the chants on which later and better known polyphonic works are based) and which deserve to be performed and judged as free-standing songs of great beauty. Doleo super te was much admired, and is praised by one medieval theorist for its expressive and low-lying melody.

The responsory Gaude Maria virgo figures in a large number of medieval miracle stories, many of which were circulating in England during the lifetime of the Veterem hominem master (as we know from Cambridge, Sidney Sussex MS95. See Christopher Page, ‘Marian Themes and Images in a Fifteenth-Century English Manuscript: A Miscellany in Two Parts’, Plainsong and Medieval Music, 5 (1996), pp 23–44). It was especially admired for its high tessitura, and one miracle story relates how it was often sung by a young man with a fine voice to ‘the canons of a certain cathedral church in Italy’ as a virtuoso solo song. We follow this with a Sarum plainsong setting of the Kyrie trope Deus creator omnium, the words of which are again employed in the Kyrie of the Missa Veterem hominem. This long troped text or ‘prosula’, also used as the Kyrie of the Missa Caput, represents the strongest proof that these masterworks are of English, rather than Continental, origin.

A note on the edition
The performance recorded here is based upon the edition of Missa Veterem hominem by Margaret Bent, Fifteenth-Century Liturgical Music, 11, Four Anonymous Masses, Early English Church Music, 22 (London, 1979). I am grateful to Dr Bent for discussing some points with me. The recording departs from the edition only in these respects: all the voices are texted throughout; and there are occasional changes to the editorial ficta, none of them principled save that they reflect what the musicians involved in the recording found most gracious to voice and ear.