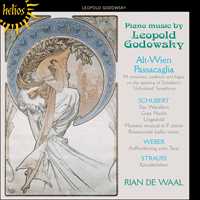 ‘A musical as well as a technical revelation … De Waal's virtuosity is awe-inspiring, and he's complemented throughout by a beautifully natural and wide-ranging recording’ (Gramophone)
‘This disc is amazing … wild stuff, to which Rian de Waal does ample justice’ (BBC Music Magazine)
‘Pure delight! And one of this year's outstanding recordings’ (Fanfare, USA)
‘Thunderously exciting pianism’ (CDReview)
‘De Waal offers a dumbfounding version of the Kunstlerleben 'symphonic metamorphosis', with its virtiginously virtuosic rethinking of the Strauss waltz, as well as several Schubert transcriptions and the equally astonishing 'contrapuntal arrangement' of Weber's Invitation to dance. All of these are thrown off with a fine sense of style—the wit and exactitude of de Waal's phrasing in Kunstlerleben have to be heard to be believed’ (International Piano)
‘Outstanding performances of transcendentally virtuoso music by a renowned virtuoso recorded superbly and presented immaculately’ (MusicWeb International)

The present recital offers a representative cross-section of Godowsky’s art, comprising two of his original works (one of enormous challenges, the other of poetical simplicity and directness) and five transcriptions (they all happen to be of work by Schubert and are unsurpassed examples of his genius in this field). In addition, there are two … well, what are they to be called? His arrangement of Invitation to the Dance is more elaborate than a transcription and thus was published by Godowsky as a ‘Contrapuntal Paraphrase’; in turn, his treatment of themes from Artist’s Life embraces more than the term ‘contrapuntal paraphrase’ describes. Neither can be called original compositions, any more than one could say Reminiscences of Don Juan, for example, is an original work by Liszt.

The Passacaglia (44 variations, cadenza and fugue on the opening theme of Schubert’s ‘Unfinished Symphony’) was completed in October 1927. It was Godowsky’s last major composition, written as a tribute to Schubert on the centenary of his death. While the variations and cadenza were composed swiftly in about a fortnight, the fugue took him several more weeks. Its completion gave him ‘new strength and a feeling of aloofness … I simply believe that [the Passacaglia] is a great expression of human loftiness. While composing it I felt that I was purifying my soul and looking closer into eternity’.

Abram Chasins, who knew Godowsky well at this time, recalled in his book Speaking of Pianists the evening when he, along with a few others (including the great Josef Hofmann), gathered in Godowsky’s apartment in New York to hear the work for the first time. The composer played it from green-coloured proof sheets stacked on the piano rack. ‘And how he played! This was sheer enchantment, both the work itself and Godowsky’s pianism. It had the cool, colorful clarity of a stained-glass window. Although I was greatly moved and impressed by what I heard, Godowsky’s effortless mastery made me unaware of the vastness of his pianistic feat that night. Years later I realized it when one of the great virtuosos told me he had worked on the “fiendish piece” for a year, several hours each day, and had finally given up the unequal struggle. “It is impossible to master”, he said. I felt tactful that day and refrained from telling him with what devastating ease Godowsky had disposed of it, making it seem like nothing at all.’ Simon Barere played it, Vladimir Horowitz prepared it but never programmed it (though his reported excuse for not doing so—‘It needs six hands to play it’—is surely a comment on something other than his digital ability). Yet until recently very few had tackled it in public. Godowsky gave its London premiere at the Queen’s Hall in April 1928; Rian de Waal, the pianist on this disc, gave its second London performance in April 1991.

Alt Wien (‘Old Vienna’) is Godowsky’s most popular original composition, though, ironically, it is in the violin arrangement by Jascha Heifetz that it is most frequently heard. (Heifetz used it as an encore for years and recorded it on at least three separate occasions.) Its nostalgic charm made it a perfect choice of background music for a scene in the 1932 film Grand Hotel in which John Barrymore asks Joan Crawford to dance with the pathetic figure played by Lionel Barrymore. Alt Wien is from Godowsky’s Triakontameron, a cycle of thirty short pieces written, supposedly, in the same manner as Boccaccio’s Decameron—composing a different piece each day for thirty days. In fact, twenty were written on almost consecutive days in August 1919 (including Alt Wien which though published as No 11 of the set was the second to be composed, on 8 August in Seattle), the rest on odd days from September to the following February.

Godowsky transcribed twelve of Franz Schubert’s songs during the summer of 1926 when he was variously in Evanston (Illinois), New York, Paris or, in one case, mid-Atlantic. Das Wandern (‘The Wanderer’) and Ungeduld (‘Impatience’) from Die schöne Müllerin and Gute Nacht (‘Goodnight’) from Winterreise are contrasting examples from Godowsky’s complete set and make fascinating comparisons with Liszt’s arrangements of the same songs. Gute Nacht, incidentally, is one of the very few pieces of his own music which Godowsky recorded.

This disc contains the two remaining works of Schubert transcribed by Godowsky. Both date from four years earlier than the songs: the concert arrangement of the Rosamunde ballet music (October 1922) and the witty Moment musical (January 1922), transposed up a semitone from its original F minor.

The two Godowskian commentaries on Weber’s celebrated pièce d’occasion and Johann Strauss II’s Künstlerleben provide more taxing fare for the intrepid keyboard adventurer. Though the skill and dedication required to master these pianistic pyramids might deter all but a few, the delights for both artist and listener abound in the clever combination of themes and mounting technical challenges. The intoxicating Aufforderung zum Tanze (‘Invitation to the Dance’) has appeared in several guises. Weber’s Op 65, composed in 1819, was subsequently (and most famously) orchestrated by Berlioz. But it was the extended keyboard version by the Liszt pupil Carl Tausig (1841–1871) that undoubtedly inspired Godowsky’s contrapuntal concert paraphrase. It was in his repertoire from as early as 1897, and probably before. The ingenuity of the thematic juxtapositions and the tongue-in-cheek élan of the conception has, in this writer’s experience, been known to elicit gasps of amused amazement from the audience. Godowsky’s terpsichorean devilment was published in 1905 and dedicated to Ferruccio Busoni. It was later amplified further by Godowsky for two pianos. When the composer and teacher Rubin Goldmark saw the score and told Godowsky admiringly that he could see nothing in the way of contrapuntal possibilities that had been omitted, Godowsky smiled and said: ‘Well, I shall show you that you are wrong.’ A few days later he invited Goldmark to hear the amended version of the work—with an optional third piano part added.

In September 1912 the publishers Cranz issued Symphonische Metamorphosen Johann Strauss’scher Themen, Drei Walzer-paraphrasen für das Pianoforte zum Concert Vortrag, the title given to three concert paraphrases on Johann Strauss operettas—Wein, Weib und Gesang (‘Wine, Women and Song’), Die Fledermaus (‘The Bat’) and the one featured here, Künstlerleben (‘Artist’s Life’). (A fourth, for the left hand alone, on the Schatz-Waltzer themes from ‘The Gypsy Baron’ was added in 1928 and published posthumously.) Godowsky took as his model the then popular Strauss transcriptions by Schulz-Evler (‘The Blue Danube’) and Tausig (Man lebt nur einmal), both of which Godowsky included regularly in his early recitals. Inspired by the success of his Chopin and Weber elaborations (and no doubt having heard the barnstorming Strauss waltz arrangements by the virtuoso Moriz Rosenthal), Godowsky determined to outdo them all in terms of harmonic and contrapuntal inventiveness. The result is a polyphonic pot-pourri of joie de vivre—‘Johann Strauss waltzing with Johann Bach’ as one writer put it.

Godowsky was at pains to distance himself from the label of keyboard acrobat which such pianistic conjuring inevitably attached to him. In an interview some years later he expressed his disapproval of the sort of shallowly brilliant paraphrases so popular with audiences and which he himself had included regularly in his own recitals until the appearance of his own arrangements. ‘Virtuosity as such’, he said in 1920, ‘is the least part of the Metamorphoses, and everything in them is developed out of Strauss’s own music in an endeavour to build up a living, pulsing, colourful transformation of the simple original legitimately, by means of theme-inversion and theme development, rich and glorified instrumental counterpoint, imitation and embellishment. Hear Josef Hofmann play the Fledermaus symphonic metamorphosis and you will understand why the term “symphonic” is used in the title of these free fantasies.’