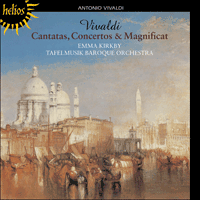 The late-baroque motet was a setting, usually for solo voice, of specially composed Latin verse designed to be inserted at a suitable point during the celebration of Mass or Vespers. The introduction into the Catholic service of extra-liturgical texts was frequently opposed by the ecclesiastical authorities but proved too popular to abolish. For one thing, motets helped to fill in moments of relative silence during the service – between the Psalms at Vespers or during the Offertory at Mass; for another, they proved the ideal vehicle for individual virtuosity, becoming virtual concertos for voice.

In turbato mare irato follows the normal four-movement plan: two da capo arias framing a recitative plus an extended concluding ‘Alleluia’. In the opening aria the singer conjures up a stormy sea; the slower central section implores the ‘dear one’ (‘cara’) – almost certainly a reference to the Blessed Virgin – to cast her light over the waters. This entreaty continues in the recitative, leaving the second aria to celebrate the ‘beloved light’ and the ‘Alleluia’ to lend a touch of coloratura exuberance.

The manuscript of this motet is held by the Sächsische Landesbibliothek, Dresden. It once belonged to the Czech composer Jan Dismas Zelenka (1679–1745), a double-bass player in the Saxon court orchestra and a noted composer of sacred vocal music. Zelenka was one of the four court musicians who accompanied the Prince of Saxony-Poland to Venice in 1716, but it appears from certain details of style and notation that he acquired the motet and its companion Sum in medio tempestatum (RV632) only some years later, perhaps through direct application to the composer. The music of the score was written out by a copyist, but Vivaldi personally added the Latin text and other verbal indications.

The ‘madrigalesque’ description that Vivaldi applies to the Concerto madrigalesco in D minor, RV129, does not refer specifically to the madrigal as a vocal genre; rather, it denotes a type of polyphonic writing in the ‘strict’ style characteristic as much of motets as of madrigals. RV129 is actually a ‘parody’ of vocal music by Vivaldi himself. Its introductory Adagio, transposed from G minor to D minor, is taken from the first ‘Kyrie eleison’ of the Kyrie, RV587 (versions of the same material appear in the early Credo, RV591, and the Magnificat, RV610/611); the ensuing Allegro is closely based on the second ‘Kyrie eleison’ from the same work, a powerfully chromatic double fugue. No source for the second Adagio has yet been identified, but its Allegro sequel is adapted from the final fugue of the Magnificat. Certain details of the autograph score in Turin suggest a date of composition in the 1720s. This may well be one of Vivaldi’s many instrumental works written for performance in Rome, where the ‘learned’ style was particularly esteemed. Nevertheless, it is a jeu d’esprit whose show of learning should not be taken too seriously.

The Concerto in G minor, RV157, for strings and continuo without soloist probably belongs to the mid-1720s. Vivaldi chose it to open a set of twelve manuscript concerti a quattro today preserved in the Bibliothèque Nationale in Paris. RV157 is a serious-minded work with contrapuntal pretensions. Its opening movement, Allegro, is constructed over a traditional ground-bass pattern (the chromaticized descending tetrachord), and features a continuous exchange of material between first and second violins in strict alternation. The graceful Largo has an almost French elegance. In the energetic finale, Allegro, Vivaldi harks back to the first movement by using the ‘descending tetrachord’ bass (this time diatonic and slightly elaborated) and by frequently interchanging the two violins.

The Concerto alla rustica in G major, RV151, for strings, oboes and continuo without soloist is one of Vivaldi’s many ‘allusive’ concertos. His experience as a composer of opera gave Vivaldi a facility with descriptive effects that he often transferred to the world of the concerto. RV151 is written on the same paper as the autograph of the chamber version (RV90) of the famous ‘Goldfinch’ concerto (Il gardellino). Since that concerto was supplied to the Ottoboni court in Rome, the Concerto alla rustica might well have had the same destination. This is also hinted by the ‘Arcadian’ nature of the subject and the specification of oboes in the score (used as ripieno instruments in the first two movements, they have a short solo passage indicated in the finale); this last feature is characteristic of the large group of works from the mid-1720s (among them, the second version of the Magnificat) that have apparent Roman connections. In the present performance the oboes are omitted.

The concerto’s opening movement, Presto, is a moto perpetuo that springs a surprise by suddenly veering menacingly in its final bars to the minor mode. A short, connective slow movement, Adagio, leads to a swift, dance-like finale, Allegro. This movement alludes to the language of folk music by emphasizing the sharpened fourth degree of the scale (C sharp), a ‘Lydian’ feature very familiar from the sonatas and concertos in the Polish style by Vivaldi’s contemporary Telemann.

Almost forty cantatas by Vivaldi are extant. All are for high voice (soprano or alto), and most are for voice and continuo alone, but a handful, including the present Lungi dal vago volto, RV680, introduce obbligato instruments. Without exception, they are secular compositions with a pastoral flavour. The poem of Lungi dal vago volto is cast in four stanzas designed for setting alternately as recitative and da capo aria. The expression is lyric in character: the poet imagines himself to be a lovelorn shepherd tormented by the absence of his beloved Elvira (recitative 1); he addresses the woodland birds, imploring them to summon the beloved to his presence (aria 1); the stratagem works, for Elvira is seen approaching (recitative 2); finally, the lover rejoices over his good fortune and protests his love (aria 2).

Vivaldi’s music mirrors the progress of the story from despair to triumph. Since the unidentified poet has chosen to introduce the cantata with a recitative stanza, the composer is able to move from the home key of E flat major to a suitably plaintive G minor for the first aria, in which the birds’ warblings are clearly audible. The second aria conveys the lover’s excitement through the use of double stopping on the violin. The opening recitative is full of expressive touches, highlighting such words as ‘lungi’, ‘tormento’, ‘corro’ and ‘sospiro’.

Among the group of compositions written on the same paper as Lungi dal vago volto is the cantata O mie porpore più belle which celebrates the consecration of Antonio Guidi di Bagno as Bishop of Mantua in April 1719. In all probability, RV680 originated during the three years from 1718 that Vivaldi spent at the court of the Governor of Mantua as ‘maestro di cappella di camera’.

Vivaldi’s setting in G minor of the Magnificat was perhaps his most successful sacred vocal composition. In the work’s original version, composed between 1713 and 1717, the orchestra consisted merely of strings and continuo, and the vocal bass part lay quite high so as to facilitate its performance by the all-female singers of the Pietà. Later, during the mid-1720s, Vivaldi revised the work for performance elsewhere (I have a theory that its destination was the court of Cardinal Pietro Ottoboni in Rome, to which the church of S Lorenzo in Damaso was attached). This version includes a pair of oboes, which normally double the strings but in one movement (‘Sicut locutus est’) have obbligato parts. Some downward transpositions in the vocal bass part suggest that the singers were this time male. The performance of this second version evidently took place in a church where the performing forces were divided into two cori, for Vivaldi’s autograph score in Turin includes cues for primo coro and secondo coro. In 1739 Vivaldi, responding again to the Pietà’s call (it had just sacked its choirmaster and had not yet appointed a successor), produced a third version of the work in which three movements of the original were replaced by five new movements for solo singers.

The present recording is based on the second version, which comprises nine movements, well varied in key, tempo, scoring and style. The opening movement, for choir, makes a strong impression with its chromatic harmony and shifting tonality. Verses 2 to 4 of the canticle become a single movement (‘Et exsultavit’, ‘Quia respexit’ and ‘Quia fecit’) on the plan of a concerto fast movement; it introduces in turn three different solo singers (soprano, alto, tenor). The ‘Et misericordia’, in C minor, is a long, pensive choral movement containing some striking large intervals. Following a brief but electrifying ‘Fecit potentiam’ movement, the ‘Deposuit potentes’ exploits the device of unison in order to suggest the idea of power. The image of poverty, in contrast, is conveyed by the next movement, ‘Esurientes’, which is scored merely for two solo sopranos and continuo. After a transitional movement, ‘Suscepit Israel’, we arrive at the ‘Sicut locutus est’ mentioned earlier. It is unclear from Vivaldi’s score whether this cheerful movement, which calls for only three vocal parts (soprano, alto and bass), is a terzet for soloists or a choral movement that omits the tenors; the present performance adopts the choral solution (and also substitutes solo violins for oboes). The opening section of the Doxology, ‘Gloria Patri’, is an adaptation of the first movement. To have a reprise at this point is normal in Vivaldi’s settings of the Doxology, as it enables the following words, ‘Sicut erat in principio’ (‘As it was in the beginning’), to have punning significance. The final section is a rousing double fugue on the text ‘et in saecula saeculorum. Amen’.