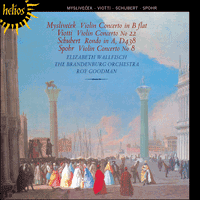 From the earliest years of the eighteenth century the violin has been a popular concerto instrument. Giuseppe Torelli was first, in about 1698, and the subsequent interest shown by Vivaldi, Locatelli, Geminiani and others saw the rapid development of the genre. By the middle of the century there was a dip in production but this was reversed by Myslivecek, who wrote eight such works between 1764 and 1772.

Myslivecek's vivacious personality endeared him to the Mozart family when they met in Bologna in 1770. 'He exudes fire, spirit and life', wrote Wolfgang, who was himself influenced significantly by the work of his lesser-known colleague. Viotti's famous Concerto No 22 dates from the last years of the eighteenth century and was highly praised by Brahms in a letter to Clara Schumann.

Both Schubert's Rondo and Spohr's Concerto No 8 date from 1816. Schubert wrote no violin concertos and yet the Rondo could almost be described as one, such is its level of development. Spohr's concertos far outstripped those of Beethoven in terms of their popularity at the time the two composers were writing, and the Eighth is fascinating in that it is more of an operatic aria, with the violin simply replacing the singer (hence its subtitle: in modo di scena cantate).

‘These readings by Elizabeth Wallfisch, one of the finest practitioners of period-instrument violin performance, are an ideal blend of scholarly and musical ideas that—when wed to her unfailing ear—produce an enlightened and enlightening result. Her sense of line is unfailing and seamless, and she lingers at just the right moment, extracting all the beauty and emotion from each and every phrase. Roy Goodman's excellent, sleek and colourful Brandenburg Orchestra does its share to contribute to the artistic success of this release’ (Fanfare, USA)
‘Intriguing rarities … played with great charm by Elizabeth Wallfisch’ (Birmingham Evening Mail)

From the earliest years of the eighteenth century the violin has been a popular concerto instrument. Giuseppe Torelli was first, in about 1698, and the subsequent interest shown by Vivaldi, Locatelli, Geminiani and others in extending the virtuoso possibilities of the violin in a concerto setting established the genre. By the middle of the century there was a dip in production—so very many had already appeared—but this was reversed by Myslivecek, who wrote eight such works between 1764 and 1772, and by Mozart’s five glorious examples of 1775. Thereafter the genre revived, though it never approached the over-production of earlier years.

Myslivecek Violin Concerto No 4 in B flat major
Josef Myslivecek composed the earliest work in this collection. It dates from 1772 or earlier and thus predates Mozart’s by several years. The Bohemian Myslivecek was friendly with Mozart; each admired the other’s musicianship and it is possible that Myslivecek’s concerto-writing exerted an influence on Mozart.

Myslivecek was one of identical twin brothers born on 9 March 1737 in Prague. Reports of their receiving tuition from Felix Benda (c1700–1768) cannot be substantiated but both certainly entered the Charles University as philosophy students. Josef showed more interest in music than in anything else and, despite becoming a master miller (his father’s trade) in 1761, the violin bow prevailed over grain. That calling he left to his brother, Jáchym. Josef began composing in about 1760: a reported set of symphonies titled after months of the year is a myth (as are his reported nicknames, ‘The Divine Bohemian’ and ‘Venatorini’), but he did indeed become an important symphonist, producing eighty-five examples.

His vivacious personality endeared him to the Mozart family when they met in Bologna in 1770. ‘He exudes fire, spirit and life’, wrote Wolfgang. There is no doubt that Myslivecek’s Italianate style influenced Mozart a great deal in opera, symphonies, and violin concertos. Furthermore, Myslivecek wrote the earliest examples of string quintet (before 1767), a form Mozart made his own much later.

Myslivecek’s musical style reflects Mozart’s impression of the man himself. A beguiling melodic gift is evident in the first movement, and despite the introduction of virtuoso writing for the soloist he never forgets that he is writing for the listener who appreciates orderly forms, pleasing harmonies and graceful melody. The Larghetto celebrates the songful capabilities of the violin in a gentle aria-like piece to which the orchestra contributes a prelude and postlude, with short contrasting interludes. Myslivecek’s ‘fire’ is well displayed in the Presto finale.

Josef Myslivecek met an unfortunate end. After a brutal operation which removed his nose in an attempt to ‘cure’ his venereal disease, his earlier successes were forgotten and he died in poverty in Rome in 1781, aged forty-three.

Viotti Violin Concerto No 22 in A minor g97
Giovanni Battista Viotti (1755–1824) was foremost a violinist and composer for his instrument, but an opportunistic streak led him into other areas and away from his native Italy. His early violin teachers included Gaetano Pugnani, with whom he undertook an extensive concert tour to Switzerland, Germany, Poland and Russia (1780–81), such was his early brilliance. In Paris, he tired of the virtuoso way of life despite enthusiastic acclaim, and ‘escaped’ into the service of Marie-Antoinette at Versailles. His administrative skills soon surfaced. He created a new opera house and supported several younger composers by mounting their operas, but in 1792 the Revolution forced him to abandon everything and flee to London. There he resumed his virtuoso existence, becoming prominent in Haydn’s concert series. Trumped-up political charges drove him to Germany in 1798 but about two years later he was back in London, this time to sell wine! An unhappy period in Paris (1819–23) brought him close to despair and he died soon after returning to London.

For all his patchy career, his position as the leading violinist of his time is undisputed. He is regarded as the founder of modern violin playing. Following Tartini, his skill was unsurpassed until the appearance of Paganini, and his numerous compositions naturally concentrate upon his own instrument. He wrote twenty-nine violin concertos between about 1782 and 1805; they are important as ‘gap-fillers’ between Mozart’s and Beethoven’s but their quality puts them far above what that phrase implies. No 22 in Giazotto’s list is dated ‘c1792–7’.

A lengthy orchestral tutti creates an atmosphere of sombre expectation which is only marginally dispelled by the soloist’s contemplative entry. Here Viotti, the master violinist-composer, shows his paces in a well-constructed movement of contrasting moods in which display is neatly juxtaposed with thematic strength. The Adagio is a placid and beautiful interlude, the Agitato assai finale possesses an intriguing subdued urgency, and the whole work provides a valuable insight into the influences to which Spohr was exposed early on. Even Brahms came to admire this Viotti Concerto.

Schubert Rondo in A major D438
Lacking any full-scale attempt at a violin concerto by Schubert—and how rewarding such an attempt might have been!—we must content ourselves with a Concertstück, a Polonaise, and this Rondo which, but for the differences in key (D, B flat and A respectively) might yet have been assembled by an arranger as a concerto of sorts. Dating from June 1816, the Rondo, D438, for violin and four-part string orchestra boasts an extended Adagio introduction. The Rondo proper is then launched, Allegro giusto, its recurring theme the soul of happiness. A contrasting theme, heard almost immediately, is of a more pensive nature. The latter returns towards the close before the final statement of the Rondo theme and an exciting coda. In this beautifully crafted movement the modest-sized orchestra supports discreetly, but it is really the soloist’s show all the way. Primarily a pianist, Schubert learnt the violin when young, so his short violin works may have been written for himself. Like much of Schubert’s music, it gathered much dust, achieving publication only eighty-one years after its composition.

Spohr Violin Concerto No 8 in A minor
The year 1816 also saw the production of Spohr’s Eighth Violin Concerto. After Beethoven’s lone entry into the field of the violin concerto ten years earlier, composers seemed to recognise the wisdom of not trying to compete unless with something stylistically totally different. Schubert’s Rondo is a fragment by comparison, while Spohr adopts a less assuming tone in his concertos. He wrote fifteen between 1802 and 1844. In No 8 he departs radically from standard concerto format by putting the soloist into the role of a singer in a dramatic scene.

Born on Monday 5 April 1784 in Brunswick, Louis Spohr was encouraged in his musical inclinations by his father, a doctor, who sent the boy for lessons to, among others, Charles Dufour. He arranged further intensive instruction. This proved so fruitful that Spohr was engaged as chamber musician at the Brunswick court of Duke Karl Wilhelm Ferdinand at the age of fifteen. At nineteen he attended a violin concert by Pierre Rode which might have set him upon the career of a violin virtuoso, but circumstances led him to wider pastures.

Conducting had been practised for centuries by choral leaders wielding a stock or some other object, but Spohr, about 1810, was one of the first to use a slender stick. This gave greater precision and resulted in increased respect for the young man as conductor as well as composer and violinist. His career took him, and his harpist wife Dorette, on many successful concert-giving trips throughout Europe, notably to London and Paris. There were short appointments with a number of posts in Vienna and Frankfurt before they eventually settled in Kassel in 1822. His innate charm saw him through a number of personal, professional and organisational difficulties, and his fame became widespread as he resumed his concert tours. He ended his days as chief director of music at Kassel and died in 1859, aged seventy-five.

He left a large number of compositions. Operas, concertos for various instruments, symphonies, choral and vocal pieces, and a prodigious amount of chamber music make up his work-list, and the violin concertos hold a special place for their unassuming freshness, vigour and variety.

Concerto No 8 opens in an ominous mood that seems to suggest an operatic event of high drama, and the soloist enters with a recitative as if to describe the scene. This is carried through at some length, the orchestra providing suitable punctuation. As the Andante second movement enters without a pause, the violin maintains its operatic stance with an aria-like interlude of grave beauty. An agitated central section further intensifies the elegiac mood before the soloist peacefully concludes the movement. But the finale renews the drama, with the soloist again offering an explanatory recitative. This movement is, for Spohr, unusually passionate but does not neglect the composer’s standard trademark of melodic elegance, nor his obligation to provide the soloist with rewarding opportunities for display.

In this Myslivecek recording, Elizabeth Wallfisch has used a violin by Pietro Paolo de Vitor (Brescia, 1750) and a copy of an early Dodd bow by Percy Bryant. For the Viotti, Schubert and Spohr she has used an Amati copy by Colin Irving (1990) and an early ‘Tourte’ bow by Kennedy (England, 1790s). We have prepared the material from original sources, making extensive use of Ferdinand David’s valuable markings in the Viotti Concerto. This includes many original fingerings and articulation marks and opens up a whole new world of expression (including slides, phrasing and dynamics) as well as providing a highly embellished slow movement. In the Spohr Concerto we also make extensive use of the composer’s own original markings in an attempt to recreate a style and performance practice perhaps long forgotten.

The Schubert Rondo is more familiar territory (and available in a good modern Urtext) but surviving editions of the Myslivecek Concerto contain countless errors, and I have made substantial revisions in order to make a performable version. I have chosen to include a harpsichord continuo for the Myslivecvek Concerto and fortepiano continuo for the Viotti and Schubert.