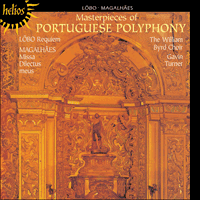 ‘Lôbo's glorious 8-voice Requiem is a sumptuous earful, but fellow Êvora alumnus Maghalhães knows how to turn an ear-catching detail with only five voices. Compelling nobility and sincerity all round’ (BBC Music Magazine)
‘Gorgeous’ (Fanfare, USA)

It is ironic that the finest period of Portuguese music was precisely during the years of Spanish rule from 1580 to 1640. Yet, although Philip II of Spain generously patronized the musicians of his new domain, it was the ducal family of Braganca – Cardinal Henrique and, above all, Duke João (King John IV after the Restoration) – who most encouraged the musical masters who are the glory of Portuguese church music in the first half of the seventeenth century. Duarte Lôbo, Filipe de Magalhães, the Carmelite friar Manuel Cardoso, Lópes Morago, de Brito, Francisco Martins and the monk Pedro de Cristo were the leading figures in an extraordinary period that starts when Palestrina was in his last years and ends some time after the death of Monteverdi. Their style is very conservative, being a genuinely continuous growth from the style we now call ‘Renaissance polyphony’. They carried on the tradition of Morales, of Palestrina, of Guerrero (beloved of later Portuguese composers) and of Victoria. Their Spanish contemporaries are Vivanco, López de Velasco, Carlos Patina, et al. It was only later, in the mid-seventeenth century, that João Lourenço Rebelo, Pedro Vaz Rego and Diogo Dias Melgás could match the ‘Baroque’ generations of Spaniards from Mateo Romero and Cererols onwards, eventually to José de Torres y Martinez Bravo and Francisco Valls.

The repertoire of a Portuguese cathedral choir in the 1630s is typified by the Coimbra inventory of 1635. It lists books of motets and Masses by Victoria, Masses and Magnificats by Duarte Lôbo and Magalhães, and Masses by Cardoso. Spaniards are represented with books of Masses by Alonso Lobo, Juan Esquivel and the earlier masters Morales and Guerrero. The books of Vespers music published by Navarro and Esquivel were there too, along with music by the Netherlands-born Philippe Rogier, chorister and then master of the Capilla Flamenca in Madrid. A very Iberian repertoire indeed; even Palestrina is not included, though his music was well known and long-used in Spain and Portugal.

Duarte Lôbo (not to be confused with the Spaniard Alonso Lobo) was the most widely known Portuguese composer of his time and his works were much performed in his own country, in the Spanish Netherlands and in Mexico and Guatemala. He was born between 1565 and 1567; he died in 1646. Lôbo studied with Manuel Mendes at the famous Cloister School at Évora, sang in the cathedral choir there and later was briefly its master. He went to Lisbon to take charge of the music at the Hospital Real and then, in 1594, he became mestre da capela at Lisbon Cathedral. He taught at the Colégio da Claustra there and held these posts, greatly respected, until his retirement, after which he directed the music at the Seminary of St Bartholomew until his death.

Lôbo’s surviving works include his editions of texts and plainsong for the Office of the Dead (Lisbon, 1603) and the Lisbon Processional (1607), and his approbation appears in a number of publications of plainsong tutors and in a Passionarium (Holy Week chants) of 1595. Above all, his own compositions were published in beautiful, indeed sumptuous, prints from the firm of Plantin in Antwerp.

Lôbo’s sixteen Magnificat settings came out in 1605. They are concise and brief, thus entirely suitable for the regular service of Vespers. In 1621 and 1639 the books of Masses appeared. These vary from the short and simple to elaborate and imposing works for five, six and eight voice parts. Both Mass books end with a Missa pro defunctis and funeral motets. Not counting the Requiem settings, there are thirteen Masses.

The Requiem Mass of 1621 is for eight voices, whereas that of 1639 is for six, the latter being unusual for its time in having a setting for alternate plainsong and polyphony of the Dies irae. The 1621 Missa pro defunctis is not for two separated choirs, though there are some antiphonal moments between the two groups (the voices are two each of sopranos, altos, tenors and basses). The plainsong intonations, incipits and verses are given in the 1621 print and the polyphony is closely linked to the ancient chant melodies which are often paraphrased or quoted.

Lôbo thins out his eight-part texture briefly but frequently; his harmony is very simple but very firm, with strongly directed bass lines. The general effect is homophonic, but there is some quite lively contrapuntal treatment in the Gradual and in the Offertory. The Gradual has a free-flowing trio for the verse ‘In memoria’, but elsewhere all eight voices are used. The outer movements are extremely simple; this is the kind of music that looks nothing on paper, yet in performance has great dignity and atmosphere. The music is what Lôbo, the professional priest and composer, intended it to be – entirely suitable for the Requiem Mass, for the solemn Catholic rites of funeral or memorial.

Most publications of the Requiem Mass in the sixteenth and seventeenth centuries have appended one or more motets suitable for funerals, and this recording offers Audivi vocem de caelo, a six-voiced work which concludes Lôbo’s 1621 Liber Missarum.

Filipe de Magalhães, like his contemporary Lôbo, was a chorister and pupil at Évora, singing in the cathedral choir and the Colégio da Claustra there. Indeed, Magalhães became Manuel Mendes’ favourite pupil, inheriting in 1605 all the music of his former teacher. Magalhães moved to Lisbon to become a singer in the royal chapel, and he became its master in 1623. He retired in 1641, a year after the Restoration when Duke João became king. Many Magalhães works must have been lost in the great earthquake of 1755; indeed, we know of a number, including an eight-voice Mass, that were catalogued at part of João IV’s great music library. Unlike Duarte Lôbo, Magalhães had two books of his music printed in Lisbon (rather than Antwerp). The quality of typeface and printing is poor by comparison with Lôbo’s books from Plantin’s press, but the music shows the high quality and expressiveness that has led some modern writers to claim Magalhães as the best of Portugal’s composers.

In 1636 Magalhães had his book of Magnificats published; his Missarum Liber is also clearly dated 1636 on the title page. It is in these books that most of Magalhães’ extant music survives. There are seven Masses, for four or five voices, some with elaborate second settings of the Agnus Dei (curiously, the ending ‘dona nobis pacem’ never appears in these works, even when a second Agnus is given). All the Masses, like all other Portuguese settings of the period, have two ‘Christe eleison’ movements, clearly separate. That they indicate the possibility of plainsong alternation is not at all clear, and, just where that might be likely – in the plainsong-based Requiem – there is, surprisingly, only one ‘Christe’. His Missa pro defunctis is for six voices and is followed by the highly expressive Commissa mea pavesco (for six voices) which concludes the publication.

The Mass Ordinary performed on this recording is a typical continuation of the Palestrina and Victoria tradition of the late-sixteenth century. Missa Dilectus meus is based on a motet not yet traced. It is written for five-part choir with divided sopranos. The full complement is used most of the time, but the ‘Crucifixus’ of the Credo is reduced to SSAT and the Benedictus is for SAT. The ‘Hosanna’ is in triple time.

The second Agnus Dei is for six voices, the altos now being divided. The tenor part follows in strict canon at the octave with the first soprano part, which leads. The music flows continuously in smooth and effective polyphonic style, a fine example of the conservative stile antico in Portugal. The funeral motet Commissa mea pavesco concludes this recording. This is a masterly work, confident in manner, very sure in its succession of themes worked out unhurriedly, touchingly penitent but full of dignity.